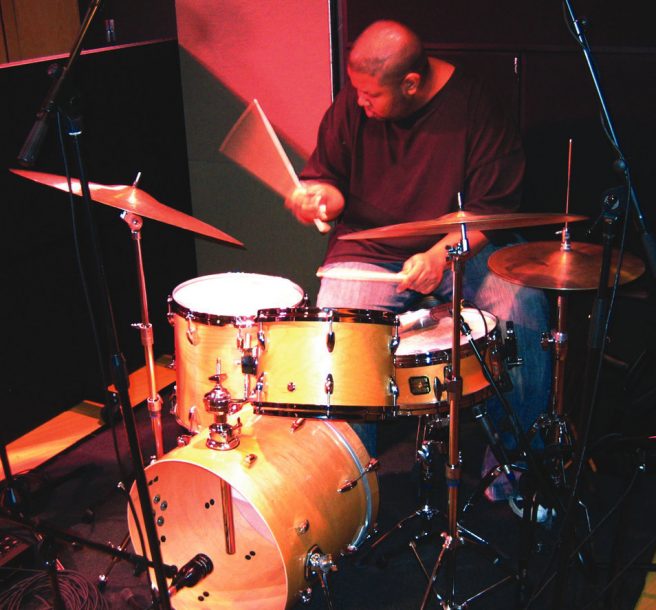 For a spring weekend each year, the celebrated, artistically left-leaning Moers Jazz Festival unfolds in an epic-sized circus tent, in one corner of a park which is otherwise taken over by a Woodstock-esque crush of tent campers and shambling rows of vendors on the same weekend. It has been thus for nearly four decades, going back to the hale ’70s, a period when avant-garde American artists were hosted, toasted and sometimes recorded on the Moers Music record label.

Fast forward to the last five years, and next generation artistic director Reiner Michalke has done sturdy work in bringing a new vitality and international ear back to the festival. This May’s festival feast, a healthy, diversified flow of about twenty shows in four days, and with sideline features such as the all-improv “morning sessions” and “concerts in the dark” – featured non-mainstream guitarists (Terje Rypdal, two shows from Bill Frisell, Arto Lindsay, Fred Frith) and an inspired, illuminating focus on women in jazz, with plenty of other diversions in the avant-circus mix.

This writer has always disliked first-person criticism. Readers don’t care about a writer’s subjective experience of art. The Leopolis Jazz Fest, however, has put me … END_OF_DOCUMENT_TOKEN_TO_BE_REPLACED

After a pandemic-induced hiatus that canceled last year’s 17-day event, Spoleto Festival USA was back in Charleston, South Carolina, for 2021—but not all the way. … END_OF_DOCUMENT_TOKEN_TO_BE_REPLACED

For JazzTimes’ (and this writer’s) first time back to physical, face-front-to-the-stage live performance in more than a year, one thing was certain: It was spooky. … END_OF_DOCUMENT_TOKEN_TO_BE_REPLACED

On January 10, 2010, an earthquake measuring 7.0 on the Richter scale struck Haiti, destroying much of its capital city, Port-au-Prince. Ten years later, with two … END_OF_DOCUMENT_TOKEN_TO_BE_REPLACED