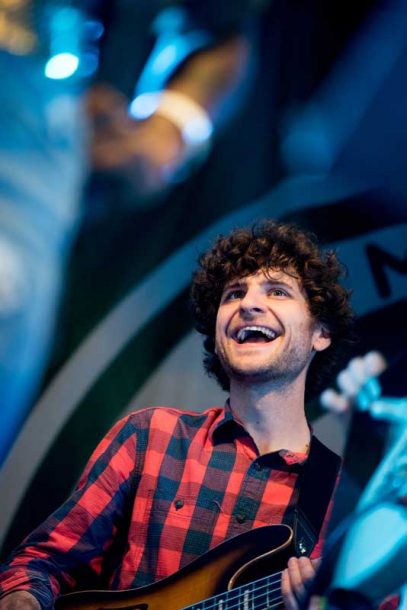 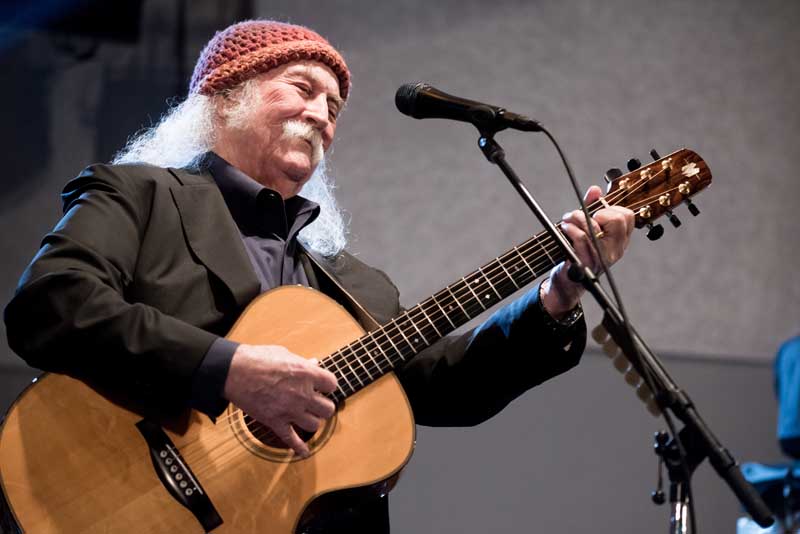 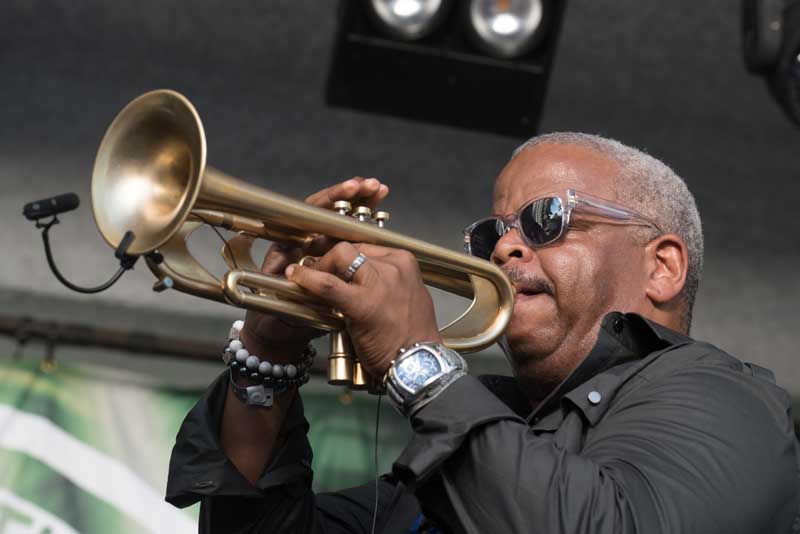 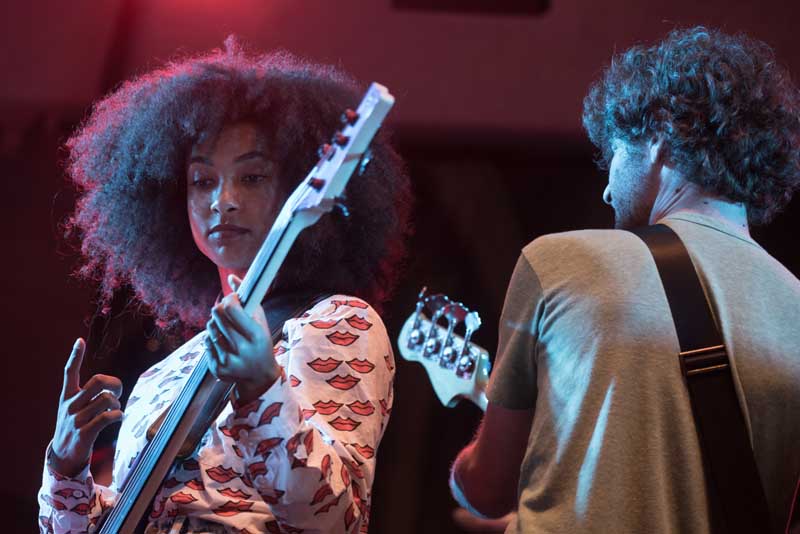 Devise an infectious, mostly instrumental sound incorporating jazz and other styles, played by an oversized but agile ensemble often numbering nearly a dozen accomplished players. Collaborate on critically acclaimed recordings with guest singers, lately including a revered folk-rocker who played Woodstock. Tour relentlessly all over the world, generating wild enthusiasm at clubs, concert halls and festivals. Amass a loyal cult following that threatens to explode into something even larger. Pick up several Grammy Awards, including a freshly minted one for Best Contemporary Instrumental Album (for Culcha Vulcha).

What else is on Snarky Puppy’s to-do list? How about launching an ambitious fest of its own, where the group headlines three consecutive nights and provides a showcase for acts featuring the band’s revolving cast of musicians and other high-caliber artists, representing a rangy mix of genres? That’s exactly what Michael League, the bassist, composer, arranger and chief musical architect for the Brooklyn-based, Texas-born band did in creating the inaugural GroundUP Music Festival. The fest, held Feb. 10-12 on a gorgeously sunny weekend at the historic North Beach Bandshell and adjacent Palm Grove Park in Miami Beach, was created in conjunction with Snarky Puppy’s label, GroundUP Music, Miami’s Rhythm Foundation and the University of Miami’s Frost School of Music, among other South Florida partners.

“I’ve wanted to do a festival for a long time. I think every musician dreams of getting a bunch of artists that they love and just kind of putting them together in one place and seeing what happens,” League said, seated on a second-story terrace overlooking the venue’s lush park, during a rare few minutes when he wasn’t racing between stages to play bass or guitar, sing, introduce acts or help coordinate the proceedings. “We’ve done that a lot with the Family Dinner albums. This is just like a big live Family Dinner for us. I want people to discover new music here. I want them to come for one artist and walk away listening to 15. For me, that’s the main goal.”

Snarky Puppy’s hourlong shows were the event’s centerpieces, and the band delivered inspiring performances, with not all of its musicians playing every set. The riff-driven “Grown Folks,” from Culcha Vulcha, with guest bassist Esperanza Spalding playing fretless and offering an extended bout of acrobatic scatting, was a highlight. So were “Lingus” and “Shofukan” during the fest’s final set, both with sing-along melodies and infectious grooves, and featuring a stage full of guests.

The first GroundUP festival was nothing if not eclectic. “We don’t want to put any boundaries up anywhere,” David Crosby said. “The best kinds of new music came from taking disparate sources and putting them together to synthesize a new music. Every time we do that here, by mixing completely disparate streams, we’re creating new music. That’s a mitzvah, doing good in the world, when you do that.”

Mixing and matching was the affair’s m.o. Spalding, on upright, also sat in on part of Terence Blanchard’s freewheeling fusion-edged set, his effects-augmented trumpet sparring with League, fellow Snarky Puppy bandmates Bob Lanzetti and Bill Laurance on guitar and keys, respectively, and New Orleans drummer Jamison Ross. As designated “artist at large,” Spalding seemed to be everywhere. She joined Crosby, League and singer-songwriters Becca Stevens and Michelle Willis for the Latin-tinged “Look in Their Eyes,” one of several folk-pop tunes in their set taken from Crosby’s Lighthouse album, produced by the Snarky Puppy leader. Crosby and friends also offered CSN&Y favorites “Déjà Vu” and “Woodstock.” And Spalding and Stevens turned in a duo performance/discussion.

The program was broad and deep, allowing for top-shelf Afro-Cuban jazz with rising-star master conguero and singer Pedrito Martinez, whose entrancing set included “The Chicken”; the auspicious debut of League’s new percussion-heavy Bokanté band, combining West African rhythms with Delta-blues textures via Miami pedal-steel guitarist Roosevelt Collier, Guadalupe-born singer-songwriter Malika Tirolien and others; and the energetic woodwinds-and-percussion outfit Carlos Malta & Pife Muderno, from Brazil. Other standouts included mandolin virtuoso and singer (and Prairie Home Companion host) Chris Thile, in a duo with guitarist Michael Daves; the extraordinary U.K. songbird Laura Mvula; and an energetic, crowd-pleasing performance by Miami singer, songwriter, guitarist and percussionist Emily Estefan, daughter of hitmaker Gloria Estefan and Emilio Estefan, who were on-hand for the occasion. There was even a dose of rock satire, courtesy of actor Harry Shearer’s in-costume performance as Derek Smalls, the bassist-singer from beloved mockumentary Spinal Tap, with several Snarky members as his band.

The festival, produced independently sans major promoters or sponsors, was focused on providing relatively intimate listening experiences, with daily attendance capped at 1,500, pristine audio and about 35 daytime performances alternating on the two stages and never overlapping; most sets lasted an hour or less. Several festival artists also presented daytime workshops. Ten or so hours of music at the primary venue were followed by late-night performances at the Deauville Beach Resort, a Miami Beach landmark. “I’ve played most of the festivals, at one time or another,” Crosby said. “This is extremely well run, and even rarer than that, it’s good vibes. Everybody here is happy.” Said Blanchard: “[It] feels like a party.” Added Gloria Estefan: “This festival is just a no-brainer and I’m happy that someone is taking the chance to come down here.”

Among the many physical, spiritual, and institutional losses related to the still-ongoing pandemic is that of Los Angeles’ renowned Playboy Jazz Festival (PJF) at the … END_OF_DOCUMENT_TOKEN_TO_BE_REPLACED

It’s difficult to imagine what the stage and the audience would have looked like at Gaillard Center in Charleston, South Carolina, if Rhiannon Giddens’ new … END_OF_DOCUMENT_TOKEN_TO_BE_REPLACED

“It’s time to imagine a place where we can come together,” Danilo Pérez said from the hallowed stage of Washington, D.C.’s historic Sixth & I … END_OF_DOCUMENT_TOKEN_TO_BE_REPLACED

At the Zeiders American Dream Theater in Virginia Beach, Va., between April 8 and 10, the Vocal Jazz Summit convened in person for the first … END_OF_DOCUMENT_TOKEN_TO_BE_REPLACED