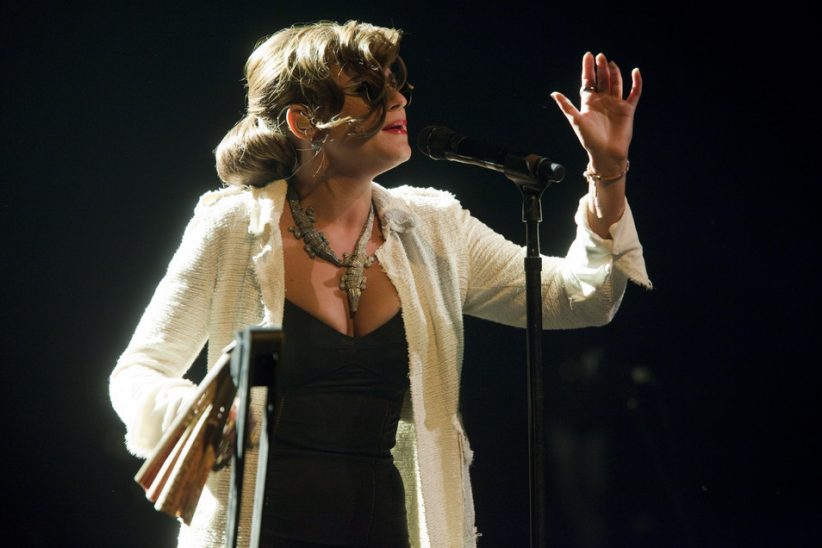 Melody Gardot has a great voice. She’s also handy on the piano and guitar. Those traits have certainly translated in the recording studio, where Gardot has crafted three winning albums, including the recently released The Absence.

Yet, you really need to see her onstage to fully appreciate this 27-year-old Philadelphian. That’s where her single greatest strength, the one thing that truly separates Gardot from the pack, shines the brightest.

Simply put, Gardot’s best asset is that she possesses that elusive “it” factor. Some might chose to define “it” as charisma or stage presence. Both of those work, but an even more appropriate definition for “it” seems to be star power.

From the moment she walked onstage for her sold-out show at the 33rd annual Montreal International Jazz Festival, to the encore that came nearly two hours later, Gardot absolutely radiated in front of the rapturous crowd.

The evening began with one of the most dramatic entrances/opening numbers in recent memory. The house lights went down and Gardot walked out onto the large stage at the festival’s lovely Salle Wilfrid-Pelletier theater, a single figure cutting through the darkness to the sound of thousands of hands clapping. A lone spotlight hit, which still managed to leave Gardot equally shrouded in shadows and mystery, and then the star softly began to croon the achingly beautiful traditional tune “No More My Lord.” Her voice steadily grew more urgent, accompanied only by the steady stomp of her left foot and a small tambourine in her hand, until she seemed to have every single listener under her spell.

People were still talking about that opening number on the following day. It was, no doubt, the kind of entrance that only a true star could get away with. Yet, it was only one of many highlights to be enjoyed during Gardot’s show. Indeed, each of the 14 numbers performed was spellbinding.

Beginning with the second offering, “The Rain” (from 2009’s My One and Only Thrill), Gardot was joined by a nine-piece band, which included a small horn section and a couple of backing vocalists. The arrangements were retro-slick, as Gardot managed to evoke memories of a variety of classic crooners, from Judy Garland to Nina Simone, during such songs as “Mira” and “So Long” (both from The Absence).

In general, Gardot was at her best when she was standing in front of the microphone, which maximized the whole “retro jazz diva” aura. Yet, she also did a fine job on the piano and, as expected, absolutely slayed the crowd when she picked up the electric guitar to perform her signature song, “Baby I’m a Fool” (from My One and Only Thrill).

Of course, it didn’t hurt matters that the visuals so perfectly matched the sonics. Gardot, fashionably dressed in a short dress, high heels and white overcoat, looked like she’d stepped right out of Hollywood’s Golden Age. In other words, she looked-and sounded-every bit the star.

Among the many physical, spiritual, and institutional losses related to the still-ongoing pandemic is that of Los Angeles’ renowned Playboy Jazz Festival (PJF) at the … END_OF_DOCUMENT_TOKEN_TO_BE_REPLACED

It’s difficult to imagine what the stage and the audience would have looked like at Gaillard Center in Charleston, South Carolina, if Rhiannon Giddens’ new … END_OF_DOCUMENT_TOKEN_TO_BE_REPLACED

“It’s time to imagine a place where we can come together,” Danilo Pérez said from the hallowed stage of Washington, D.C.’s historic Sixth & I … END_OF_DOCUMENT_TOKEN_TO_BE_REPLACED

At the Zeiders American Dream Theater in Virginia Beach, Va., between April 8 and 10, the Vocal Jazz Summit convened in person for the first … END_OF_DOCUMENT_TOKEN_TO_BE_REPLACED