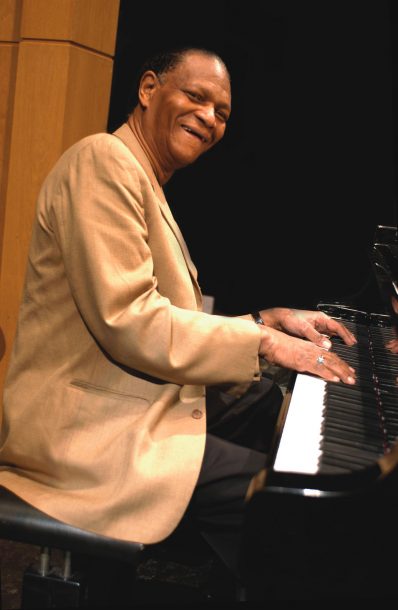 Maybe it was the aroma of the fragrant gardens that put the great pianist in an expansive mood, but McCoy Tyner’s Saturday night set ending the Caramoor Jazz Festival went well beyond a salute to the Impulse! albums of the 1960s. In the second and final New York-area appearance of his septet this year-the group began the Impulse! tour at the Blue Note in early June-Tyner made good on his promise to this reviewer in an interview during the weeks leading up to the tour: that he would reach beyond the records, incorporating everything he has learned in the decades since making them.

The night was made for it. Before a packed crowd of 1,700 under the tent at the sprawling former Westchester County estate on which Caramoor has fashioned its stage, the context for the evening was established when Ashley Kahn, author of The House That Trane Built, held a short question-and-answer session with Tyner, Steve Kuhn (who, like Tyner, played piano with John Coltrane) and David Liebman (a self-described Coltrane devotee who played with Miles Davis). For anyone who lived through the period, it took no effort to summon memories.

The music also summoned memories. Though Tyner was thinner after an illness and seemed to leave some of the improvisatory heavy-lifting to his sidemen-his famous single-note lines were a bit less rapid than in the past and largely confined to the middle of keyboard-the signature left-hand fourths still rumbled forth, fusing with bassist Charnett Moffett and drummer Eric Gravatt much as they did with Jimmy Garrison and Elvin Jones during the Coltrane days.

But this was no mere exercise in nostalgia. On tunes like “A La Mode” and the Latin-tinged “Angelina,” the horn players-Liebman on tenor and soprano saxes, Donald Harrison on alto, Wallace Roney on trumpet and Steve Turre on trombone and conch shells-all brought a sly sense of homage to the proceedings. Devoid of mannerism, playing new arrangements by Bob Belden, they managed to be evocative without being imitative.

Meanwhile, Joe Lovano-the master tenor and soprano player who is in his third year as artistic director at Caramoor-loomed over the proceedings. Though he took a subtle yet stinging blues turn with Tyner’s group, it was probably his work on “Giant Steps,” delivered as he sat in with the Ravi Coltrane Quartet earlier in the festival, that best defined his approach to the Coltrane legacy. In an interview before the Saturday night show, he said, “You don’t deal with it by copying how he played. You try to put your own ideas together with his influences.”

For his part, Tyner’s legendary stamina appeared to be a bit less evident than in past years. His ideas, though, were as defined as ever, if tempered by an introspection that has at times over the years seemed overwhelmed by raw power. Indeed, while the power is still there, Tyner’s playing at age 68 is that of a man who, five decades after ministering to an ailing Bud Powell, has in recent years delved into the canon of Burt Bacharach-a man who, like Coltrane, refuses to stop exploring.

Ultimately, however, it was Moffett who most strongly brought Coltrane to mind-not literally, but in his spirit of adventurousness. On “Happy Days,” a gospel-flavored Tyner original from the Fly With the Wind period, he fairly attacked the bass, alternating between pizzicato and bow and moving from lower to upper registers with startling facility as his feet worked the wah-wah pedal. Producing sounds so varied yet so well integrated into the music, he pushed his instrument’s boundaries beyond anything heard during the Impulse! years. Tyner was visibly impressed, smiling and acknowledging his young sideman as the audience rose to its feet.

The 2022 Newport Jazz Festival’s three days of sunshine were bracketed, more or less, by a pair of all-star ensemble jams that included Christian McBride. … END_OF_DOCUMENT_TOKEN_TO_BE_REPLACED

In its first full edition since the onset of the pandemic, and with a new director of programming, the Festival International de Jazz de Montréal … END_OF_DOCUMENT_TOKEN_TO_BE_REPLACED

Among the many physical, spiritual, and institutional losses related to the still-ongoing pandemic is that of Los Angeles’ renowned Playboy Jazz Festival (PJF) at the … END_OF_DOCUMENT_TOKEN_TO_BE_REPLACED

It’s difficult to imagine what the stage and the audience would have looked like at Gaillard Center in Charleston, South Carolina, if Rhiannon Giddens’ new … END_OF_DOCUMENT_TOKEN_TO_BE_REPLACED