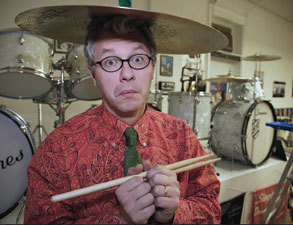 There’s a striking completeness about the drummer Matt Wilson’s Arts & Crafts. The quartet works in equilibrium between most of jazz’s tenets, yet never seems to be casting its net too wide. The band harbors virtuosic talent but communicates easily and assuredly, with plenty of hummable melody and foot-tapping rhythm to grab onto. It often flaunts a postmodern quirkiness indicative of small-group jazz in the 2010s, but its sets can also be taken as jazz-history lessons. It can be stern, emotive, odd and funny, sometimes in the same tune. This sort of particular versatility marks Wilson, whose performances always reveal a couple things straight off the bat: He’s highly likable as a personality, and his study of jazz-drumming lineage is both specific and comprehensive.

You can imagine Arts & Crafts going over well in any venue, for any audience. On Wednesday night, the band, featuring trumpeter/flugelhornist Terell Stafford, keyboardist/accordionist Gary Versace and bassist Martin Wind, came across as tailor-made for the Village Vanguard. (This was Wilson’s first leader run at the Vanguard, and this 9 p.m. set was recorded for broadcast on WBGO and NPR Music.)

Arts & Crafts veered stylistically far and wide without straying from jazz tradition. Monk’s “We See” opened the evening with bebop aplomb; Wilson’s blues “The Scenic Route” shifted the proceedings toward ’60s soul-jazz; Wind’s “Cruise Blues” was a brushes-and-flugelhorn slow burn with a gorgeous melody. Often, Arts & Crafts was more in sync with the ’50s than the postbop ’60s. (There’s more of that, and a lot of Ornette Coleman’s early-small-group edge, in Wilson’s fine Quartet.) Certain groups-Miles’ Second Great Quintet, the Bill Evans Trio-established the current belief that great jazz interplay has to be blurred and seamless, but Wilson’s band impressed by respecting a defined soloist/accompanist relationship.

That approach-in which spotlight is savored rather than obscured-really works when you have players like these. Stafford, a hard-bop disciple through-and-through, stayed in the harmonic and rhythmic pockets and built his statements using classic strategies: smart, muted riffing, motivic development and volume dynamics (his solos traveled from purrs to barnburning crescendos). As heard on “There’s No You,” a moving unaccompanied tribute to the late bassist Dennis Irwin, Stafford finds the requisite power in the middle and upper-middle registers; he doesn’t need to squeal to thrill.

Wilson, grinning and hooting per usual, soloed with a wit and directness descended from Roy Haynes-especially on the “Out of Nowhere” contrafact “No Outerwear” and “We See,” where he shared Snap Crackle’s affinity for clever, swinging understatement and rim-shot texture. Wind’s legato-heavy solos brimmed with melody and the blues; on “No Outerwear,” Versace laid down the walking low end, bolstering his bass player through his solo as if he were a guitarist. Handling Jaco’s fretless electric lines with ease, the bassist showcased his dexterity at the outset of Weather Report’s funky “Teen Town.”

If all of this sounds staid, perhaps even derivative, it wasn’t; there was enough of the zaniness that marks Wilson’s bands to subvert the classicism. On “The Scenic Route,” Wilson grooved headlong underneath a Versace organ solo soaked in circus-Farfisa vibrato. At the close, Wilson “played” two stuffed children’s toys into a mic. “Bubbles,” a multi-sectioned tour de force, featured Versace on accordion, furiously swinging trumpet/bass/drums bop and a gentle reading of Carl Sandburg’s verse over Wind’s arco effects. “Two bubbles found they had rainbows on their curves,” Wilson said. “They flickered out, saying, ‘It was worth being a bubble just to have held that rainbow 30 seconds.'” The poem, and its delivery, offered an incisive analogy for Wilson’s enterprise: meaningful with some indeterminacy, prankish but beautiful.

Among the many physical, spiritual, and institutional losses related to the still-ongoing pandemic is that of Los Angeles’ renowned Playboy Jazz Festival (PJF) at the … END_OF_DOCUMENT_TOKEN_TO_BE_REPLACED

It’s difficult to imagine what the stage and the audience would have looked like at Gaillard Center in Charleston, South Carolina, if Rhiannon Giddens’ new … END_OF_DOCUMENT_TOKEN_TO_BE_REPLACED

“It’s time to imagine a place where we can come together,” Danilo Pérez said from the hallowed stage of Washington, D.C.’s historic Sixth & I … END_OF_DOCUMENT_TOKEN_TO_BE_REPLACED

At the Zeiders American Dream Theater in Virginia Beach, Va., between April 8 and 10, the Vocal Jazz Summit convened in person for the first … END_OF_DOCUMENT_TOKEN_TO_BE_REPLACED