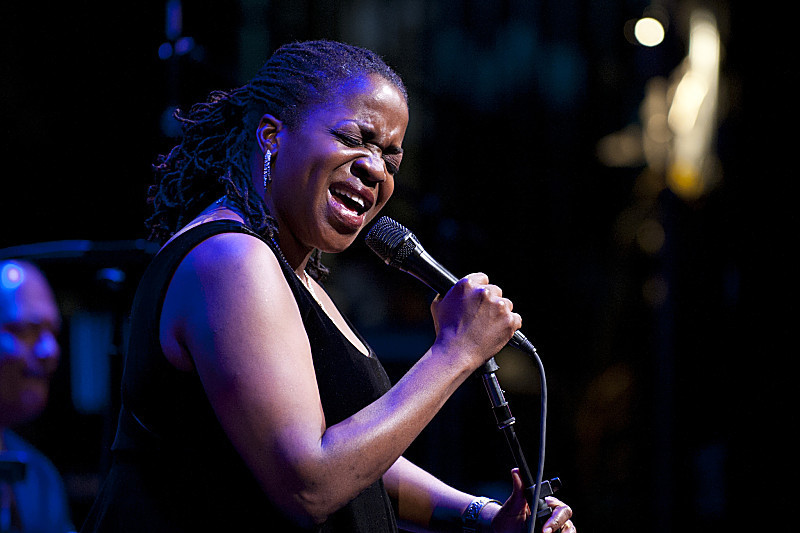 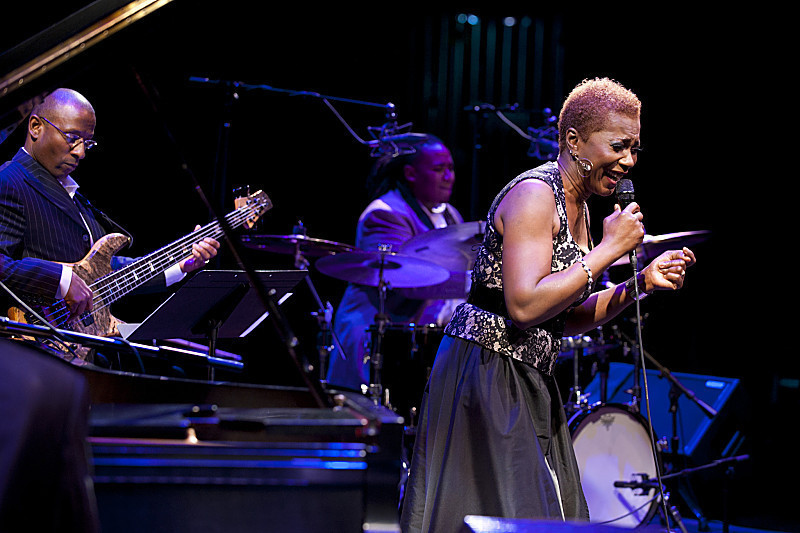 Two years after Dr. Billy Taylor’s death, his spirit still loomed over this year’s Mary Lou Williams Women in Jazz Festival. Now in its 17th year, the festival-a program of Washington D.C.’s John F. Kennedy Center for the Performing Arts-was founded by Taylor in 1996, in his capacity as the Center’s Artistic Advisor for Jazz. His name, and gratitude for the program, was on the lips of the participants, including host Dee Dee Bridgewater, at the 2012 iteration from May 10-12.

Surely, as well, Taylor would have thanked the festival’s performers. His vision was not only to showcase female jazz talent, but to demonstrate the wide range of nations and musical facets they represent. The first night, Thursday, alone vindicated him. Pianist Chihiro Yamanaka, a native of Japan, is wildly successful in her own country despite now being based in New York. Her trio presented straightahead jazz that nevertheless took bold, challenging chances with its material, including a violent rendition of “Take Five” that reconstructed its syncopation even as it steadfastly maintained the tune’s 5/4 rhythm. Canadian saxophonist/flutist Jane Bunnett presented a set of (primarily traditional) Cuban music, supported by pianist Hilario Durán and NEA Jazz Master percussionist Cándido Camero, still spry and aggressive at 91. Vocalist Carmen Lundy closed Thursday night with a performance of new music from her 2012 disc Changes, her deep voice sacrificing precise articulation to the greater virtues of mood and effect.

The festival mainly took place in the Kennedy Center’s Terrace Theater, but Friday’s program began on its free Millennium Stage with Amy K. Bormet, a D.C. pianist and Howard University alum (who also started a local variant, the Washington Women in Jazz Festival). Bormet performed a lovely set of original music with her “Striking” quintet, and often doubled on vocals in a high voice evocative of 1930s jazz singers.

Back in the Terrace, Friday continued the festival’s multinational component with a quartet led by Linda Oh, a Chinese-Australian bassist; a strong player, she rooted her music in a staccato, uniquely syncopated groove that her bandmates supplemented with funk lines. Admirable though it was, it also formed the evening’s least memorable set. Drummer Allison Miller was the freest and most dynamic musician in the festival, her Boom Tic Boom Project operating in a loose structure that worked swing, rock and even hip-hop. Singer Carla Cook, meantime, brought a soulful presence to the stage with an eclectic set that included Stevie Wonder’s “Too High” and Eric Clapton’s “Change the World,” in addition to jazz and gospel standards.

Anticipation runs high for next year’s event, which will be the first in which Jason Moran-Billy Taylor’s successor as the Kennedy Center’s Artistic Advisor for Jazz-will contribute to the programming. In 2012, however, the vision is still wholly Taylor’s, and does the late pianist and educator proud.

Among the many physical, spiritual, and institutional losses related to the still-ongoing pandemic is that of Los Angeles’ renowned Playboy Jazz Festival (PJF) at the … END_OF_DOCUMENT_TOKEN_TO_BE_REPLACED

It’s difficult to imagine what the stage and the audience would have looked like at Gaillard Center in Charleston, South Carolina, if Rhiannon Giddens’ new … END_OF_DOCUMENT_TOKEN_TO_BE_REPLACED

“It’s time to imagine a place where we can come together,” Danilo Pérez said from the hallowed stage of Washington, D.C.’s historic Sixth & I … END_OF_DOCUMENT_TOKEN_TO_BE_REPLACED

At the Zeiders American Dream Theater in Virginia Beach, Va., between April 8 and 10, the Vocal Jazz Summit convened in person for the first … END_OF_DOCUMENT_TOKEN_TO_BE_REPLACED