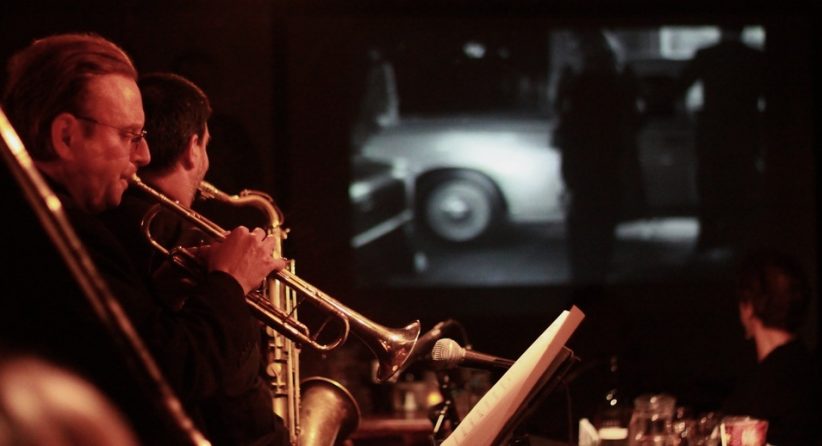 After Louis Malle had finished shooting his film noir classic Ascenseur pour l’échafaud (or, in English, Elevator to the Gallows) in 1958, he happened to find Miles Davis passing through France. On a whim, he asked Miles to compose a score for the film; instead Miles and his European quintet spent a night watching it, while improvising what would become one of the most identifiably melancholic jazz soundtracks ever.

It might seem a bit self-defeating, then, to try to recreate in a live setting the spontaneous emotion that led to that recording. After all, it’s tough to balance film and sound in a studio; it’s even tougher in a small club with a six-foot projector screen. But the Martin Shaw Quintet did just that on Monday night at London’s 606 Club, as part of the London Jazz Festival-and, along with doing an impressive Miles impression, the group brought some interesting perspectives to the score’s simple, timelessly cool framework.

The quintet-featuring Shaw on trumpet, Andy Panayi on tenor, Leon Greening on piano, Geoff Gascoyne on bass and Sebastiaan de Krom on drums-made the wise choice not to screen “Elevator to the Gallows” in its entirety, and instead used short selections to introduce the film’s musical themes. With Malle’s classic scenes playing on the 606’s adequate (if certainly not optimal) screen, Shaw and company began with an almost direct imitation of Miles’ beautifully sad, breathy tone and reserved timbre, stretching out their playing to more personal and inventive interpretations as the performance went on.

What was most effective, as well as being interesting to watch, was the fact that the quintet also recreated the style in which Miles and the original group recorded their score – by actually watching and responding to the action of the film. Along with providing a more authentic feel, this allowed them (especially de Krom, who has an extremely commanding presence behind the kit) to inevitably create some new musical conceptions of the images.

The intimacy of the 606 also did much to help the quintet, as Gascoyne’s strong, deep tone filled the room with ease, and Shaw, predictably employing a mute for most of the set, was comfortable and consistently impressive at low volumes. With voluminous technical brilliance, he remains one of Europe’s top trumpeters. Panayi’s solo sound was muscular throughout, and Greening effectively pushed the limits of Miles’ charts with both nimble runs and thick block chords.

The quintet jokingly mentioned the surprising simplicity of the themes found in the original score, which features few chord changes and-like Miles’ Kind of Blue would a year later in 1959-draws its emotional strength from modal layering. That kind of playing is obviously nothing new at this point, but they did succeed in using the broad canvas of the simple themes to give some new life to those original improvisations. Perhaps more importantly, they effectively introduced both the film and one of Miles’ truly great achievements to the more diverse, often less experienced audience that populates the London Jazz Festival. It became clear from watching the audience inside the 606 that many of them were hearing and seeing it for the first time – and that it was making a deep impression on them.

After their live interpretation of “Elevator to the Gallows,” Shaw and his quintet came back for a second set, which also centered on classic Miles. Doing another fantastic impression of the master of cool, Shaw led the 606 through entertaining, straight-ahead renditions of “So What,” “All Blues,” “Bye Bye Blackbird,” “Seven Steps to Heaven” and “Milestones.”

It’s kind of disappointing-especially after seeing such an interesting first set-to watch players of this elite caliber simply run through standards for 45 minutes. But, having said that, it can also be just as fun to hear those players relax, really lay in to the tunes, and genuinely enjoy themselves. Also, since many audience members apparently also were not familiar with Kind of Blue, it was nice to see the power of the London Jazz Festival in action, as newcomers to the music were introduced to a staple of the modern sound by five of Europe’s most exciting players.

The 2022 Newport Jazz Festival’s three days of sunshine were bracketed, more or less, by a pair of all-star ensemble jams that included Christian McBride. … END_OF_DOCUMENT_TOKEN_TO_BE_REPLACED

In its first full edition since the onset of the pandemic, and with a new director of programming, the Festival International de Jazz de Montréal … END_OF_DOCUMENT_TOKEN_TO_BE_REPLACED

Among the many physical, spiritual, and institutional losses related to the still-ongoing pandemic is that of Los Angeles’ renowned Playboy Jazz Festival (PJF) at the … END_OF_DOCUMENT_TOKEN_TO_BE_REPLACED

It’s difficult to imagine what the stage and the audience would have looked like at Gaillard Center in Charleston, South Carolina, if Rhiannon Giddens’ new … END_OF_DOCUMENT_TOKEN_TO_BE_REPLACED