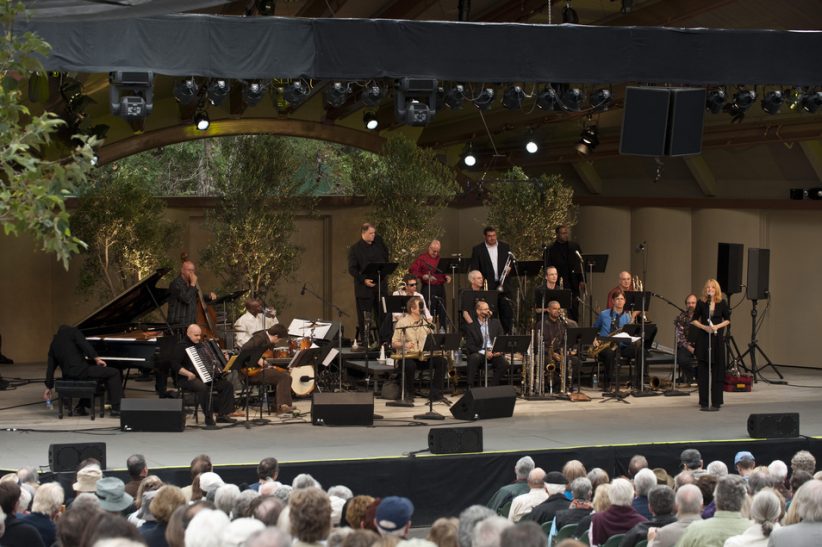 Maria Schneider and her orchestra at the 65th Ojai Music Festival on June 12, 2011 in the new Libbey Bowl in Ojai, CA

In many respects, composer/arranger/big-band conductor Maria Schneider’s meld of jazz, classical, world genres and earth consciousness was perfect for the 65th Ojai Music Festival. Set in the town’s moderate-sized Libbey Bowl outdoor stage, the classical-based festival, roughly 75 miles north of Los Angeles, always quests for artists who push the limits. In 2010, the 31-member Ensemble Modern performed Frank Zappa works, including music from The Yellow Shark and songs like “The Adventures of Greggery Peccary” and “Peaches in Regalia.” Additionally, the program included several compositions by Edgard Varèse, Zappa’s main classical influence.

Needless to say, Schneider’s music and morning performance (11 a.m.) was nowhere close to being as avant-garde. She did, however, have the audience wondering what they were in for when speaking about Minnesota farmlands (she grew up in the state and attended its university) during the introduction for the ArtistShare-commissioned “Thompson Fields.” The piece was pastoral and Aaron Copeland-slanted Americana with piano, guitar and accordion strongly accenting Schneider’s incredibly fluid 18-person ensemble. The band notably includes Steve Wilson and Donny McCaslin on reeds, pianist Frank Kimbrough and drummer Clarence Penn.

Alternately, from a world-music orientation, “Choro Dançado,” strongly influenced by a trip Schneider took to Argentina, was subtlety tango-tinged. Accordionist Victor Prieto was prominent throughout the selection yet adroitly interwoven with the brass and rhythm players. As a whole unit they began a crescendo that reached fever pitch and then wound down to the meandering opening section. “El Viento,” another commissioned piece, also had Latin tendencies, but was also infused with modern music themes to produce a whirlwind of sounds. Schneider’s rhythm players were deliberate and slow initially to set the stage for a solemn brass chorus. For added complexity, guitarist Lage Lund injected light, mystical riffs, and a trombonist interspersed Spanish undertones. Eventually the rhythm shifted uptempo, while the trumpets and several trombonists maintained the previous slower cadence to produce an offsetting intersection that was a concert standout.

“Cerulean Skies,” commissioned by Peter Sellars, who was in attendance, for the New Crowned Hope Festival in Vienna, also had an environmental aspect that was influenced by birds in New York City’s Central Park and an optimistic hope for world harmony. Several of the brass players imitated birdcalls with whistles in the early moments of the composition, before it became a triumphant theme. (Several audience members with bird whistles also contributed.) Bird-tapping sounds from bassist Jay Anderson were incorporated into the composition as well, along with conventional solos from the tenor and alto saxophonists. The selection, which concluded the concert, was uplifting and fueled by alto saxophone and light piano. A deserved standing ovation followed.

The 2022 Newport Jazz Festival’s three days of sunshine were bracketed, more or less, by a pair of all-star ensemble jams that included Christian McBride. … END_OF_DOCUMENT_TOKEN_TO_BE_REPLACED

In its first full edition since the onset of the pandemic, and with a new director of programming, the Festival International de Jazz de Montréal … END_OF_DOCUMENT_TOKEN_TO_BE_REPLACED

Among the many physical, spiritual, and institutional losses related to the still-ongoing pandemic is that of Los Angeles’ renowned Playboy Jazz Festival (PJF) at the … END_OF_DOCUMENT_TOKEN_TO_BE_REPLACED

It’s difficult to imagine what the stage and the audience would have looked like at Gaillard Center in Charleston, South Carolina, if Rhiannon Giddens’ new … END_OF_DOCUMENT_TOKEN_TO_BE_REPLACED