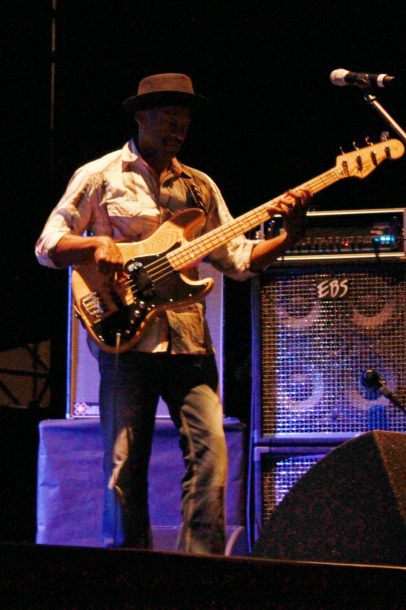 After saxophonist Chris Potter kicked off the Cheltenham Jazz Festival weekend with a lunchtime concert of chamber-suite jazz, bass boss Marcus Miller delivered a raucous climax to Saturday night. Dominating centre stage at the circus-style Big Top, the funk bassist was flanked by a spirited young band with a sack of serious tunes. Miller, arguably the best electric bassist in the business-having played with everyone from Miles Davis to Aretha Franklin, Herbie Hancock to Frank Sinatra-did not disappoint in Cheltenham and gave one of the stand-out performances of the entire festival.

The band’s high-energy show lasted for an intense 90 minutes and succeeded in transcending the showy posturing you would expect from a superstar funk gig. Sure, there were prodigiously fast solos, rousing climaxes, distorted electric guitar solos and crunching drum breaks, but these aspects were tempered by restraint, sophistication, progressive harmonies and the occasional surprise (at one point Miller whipped out a bass clarinet for a brief, haunting interlude).

That said, the brilliant showman seemed to relish performing to the sizable audience and did not hold back from his trademark, finger-busting solos-it was clear too he likes to surround himself with similarly showstopping musicians. His horn section, consisting of altoist Alex Han and trumpeter Maurice Brown, was tight as a clenched fist but, as individuals, exploded when their solos came around. One of the show’s highlights came when the pair blew up a storm in the demented “Tutu” and the encore “Blast.”

The bulk of the material was from Miller’s latest album, Renaissance, very much an extension of his renowned collaborations with Miles Davis during the latter part of the trumpeter’s career. Elsewhere in the set, the audience was treated to “Amandla,” coupling tender lyricism with boisterous synths, the hard-funk “Mr. Clean,” the lyrical ballad “February” and a wild free-jam in the form of “Detroit.” On the downside, even the most gentle ballad would eventually be souped up with bass-slapping grooves-fun to watch but forced his otherwise fine ensemble into blurting histrionic wails at each other.

When his band, however, was given free rein to build solos in their own time, they dazzled. Clean-toned trumpeter Maurice Brown freestyled with deft self-assurance while the 22-year-old Han instilled a deep knowledge of jazz into the mix. Backing the lot was drummer Louis Cato, whose raw power fueled the high-octane set throughout. Once “Amandla” brought the show to a boiling point, the audience was left hollering for an encore. They got three, ending with a Spanish-tinged tour-de-force from all, wrapping up this powerhouse of a performance.

Among the many physical, spiritual, and institutional losses related to the still-ongoing pandemic is that of Los Angeles’ renowned Playboy Jazz Festival (PJF) at the … END_OF_DOCUMENT_TOKEN_TO_BE_REPLACED

It’s difficult to imagine what the stage and the audience would have looked like at Gaillard Center in Charleston, South Carolina, if Rhiannon Giddens’ new … END_OF_DOCUMENT_TOKEN_TO_BE_REPLACED

“It’s time to imagine a place where we can come together,” Danilo Pérez said from the hallowed stage of Washington, D.C.’s historic Sixth & I … END_OF_DOCUMENT_TOKEN_TO_BE_REPLACED

At the Zeiders American Dream Theater in Virginia Beach, Va., between April 8 and 10, the Vocal Jazz Summit convened in person for the first … END_OF_DOCUMENT_TOKEN_TO_BE_REPLACED