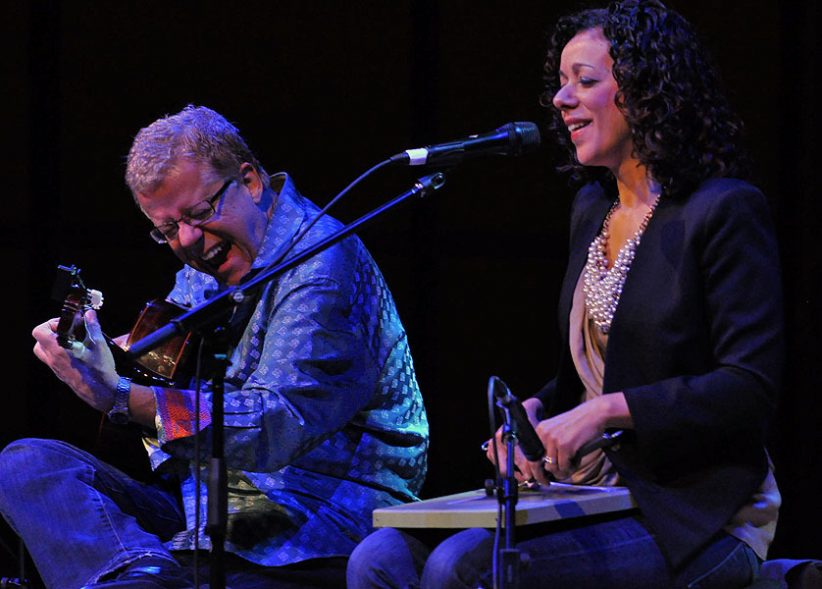 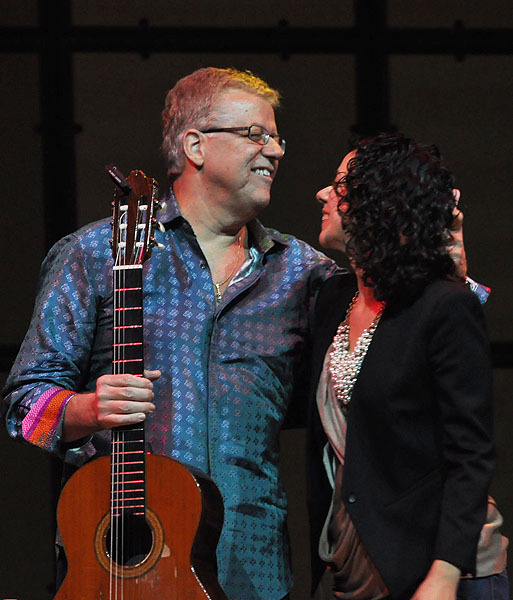 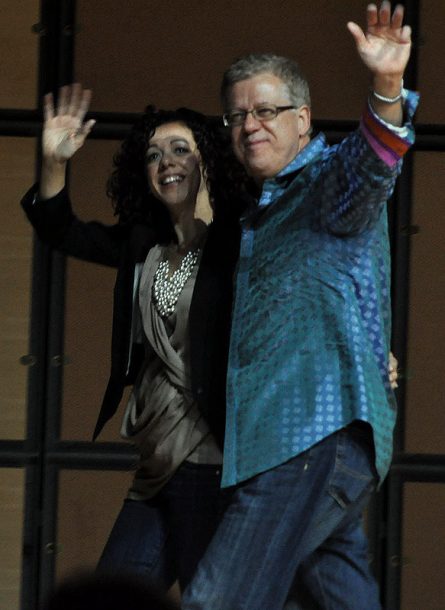 In 2005, when Luciana Souza’s future husband, the L.A. record producer and jazz bassist Larry Klein, came to hear her duo with Brazilian guitar virtuoso Romero Lubambo at NYC’s Jazz Standard, he wanted to like her very much. Having met the Brazilian singer briefly backstage at an L.A. Philharmonic concert where she was the featured soloist, Klein was intrigued as much by her vocal chops as by her intelligence and grace. Now he was in New York on business, but also to see Souza again.

“When people sing in multiple genres,” Klein recalled not long ago, “scary things can happen. I had heard Luciana in the context of orchestral music, and in this show she was performing Brazilian music with a guitar player. I remember going to the club and thinking, ‘Oh, I hope this is good.’ But then they started playing and … she was so damn good I got a bit intimidated. They were amazing.”

Eight years later, Souza and Lubambo were back at the Jazz Standard and still amazing audiences with their mastery of tricky Brazilian rhythms, the depth of their emotion and their synergy as a duo.

Klein and Souza, now married and living in L.A. with a three-year-old son, are celebrating her Grammy nominations in two different categories, not to mention two different languages, for two of her albums produced by Klein and released on the same day: The Book of Chet, an homage to Chet Baker, and Duos III, the latest installment of her critically praised series of vocal/guitar duets of Brazilian songs, which features Lubambo and two other Brazilian guitar greats, Marco Pereira and Toninho Horta.

For this Valentine’s week engagement, Souza and Lubambo played love songs in Portuguese and English from both albums. Either performer could have led the date. Souza is arguably the greatest Jobim interpreter of her generation and a six-time Grammy nominee (with one win). Lubambo, a preeminent master of finger-style guitar in both Brazilian and jazz idioms, is not only Souza’s regular duo partner but a mainstay of Dianne Reeves’ rhythm section, as well as a member of Trio da Paz, perhaps the finest small group in Brazilian jazz.

They began a sprightly “Doralice” with Souza high-speed scatting in unison with Lubambo’s rush of single notes, a kind of amuse-bouche for the ears, before settling into the lively samba rhythm. Throughout the evening, Souza played percussion, sometimes a snare with brushes, sometimes wielding a mean triangle. Between the two of them they often sounded like a quartet.

The fast-paced samba mode continued with Djavan’s delightful “Maria das Mercedes,” the only song all evening not featured on the “Duos” or “Chet” albums. Introducing the Jobim masterpiece “Chora Coracao,” Souza listed great Brazilian composers—Chico Buarque, Ivan Lins, Barbosa, Caymmi—but said, “We always go back to Jobim.” Her performance of this haunting ballad—with its lyric that translates as, “Have pity on me/I can no longer live without you”—was infinitely tender, yet delivered with surgically precise intonation.

For songs from the hypnotic Book of Chet album, which features Souza’s voice backed only by an austere guitar trio led by Larry Koonse, Lubambo switched from a Prenkert classical guitar to a Godin 5th Avenue electric. On the album, she said, “We did all ballads, everything slow, slower, then slower than that.” Reproducing her haunting arrangement of “The Thrill Is Gone,” Lubambo played the bass ostinato and descending fourths, and Souza provided the drowsy beat with brushes, together nailing the arrangement’s ghostly effect. The similarity to the album ended there, however, as Souza took liberties with the melody, dragging the lyric about a love grown stale as if she were lugging around a corpse, in an altogether affecting display of dramatic vocal prowess.

More wonders followed: a great performance of “Dindi” in an original Lubambo arrangement blending bossa nova and blues; and the wordless instrumental duet “Dona Lu,” a virtuoso piece written for Souza by Marco Pereira. What can you say about such mastery? Following a medley of songs by Gilberto Gil and Djavan that turned into a blazing display of technical acumen by Lubambo, Souza remarked, “We’ve been playing together since 1996, and every night I’m just … ” As her words trailed off, she just looked incredulous.

“It’s time to imagine a place where we can come together,” Danilo Pérez said from the hallowed stage of Washington, D.C.’s historic Sixth & I … END_OF_DOCUMENT_TOKEN_TO_BE_REPLACED

At the Zeiders American Dream Theater in Virginia Beach, Va., between April 8 and 10, the Vocal Jazz Summit convened in person for the first … END_OF_DOCUMENT_TOKEN_TO_BE_REPLACED

The Big Ears Festival returned to Knoxville in a big way in late March, drawing an estimated 30,000 music enthusiasts from across the U.S. and … END_OF_DOCUMENT_TOKEN_TO_BE_REPLACED

Let’s get this out of the way: The Savannah Music Festival is not a jazz festival. Held over the course of 17 days in late … END_OF_DOCUMENT_TOKEN_TO_BE_REPLACED