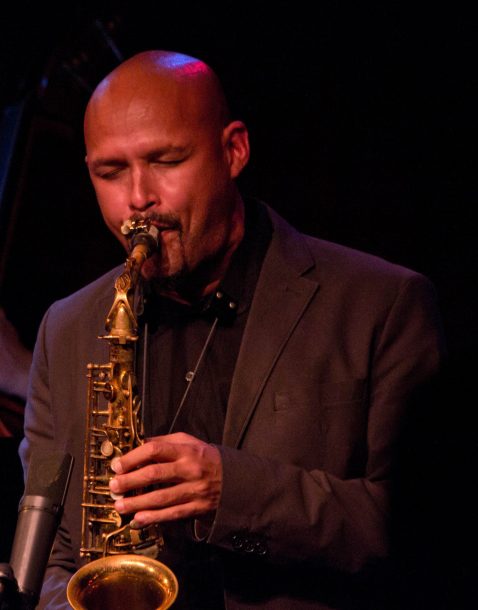 Miguel Zenón brought his multimedia project on Puerto Rican identity to New England Conservatory’s Jordan Hall on February 22 for a rare performance by his longtime quartet and a jazz orchestra (others will follow at SFJAZZ Center on June 1 and at Carnegie Hall on December 7) of music destined for a recording session in Germany early next year. Zenón himself conducted the interviews with the several New York-based, second-generation Puerto Ricans featured on the video portion of the program, and he composed and arranged all the music.

“Our conversations,” writes Zenón in accompanying program notes, “can basically be summarized into one single question: What makes a Puerto Rican a Puerto Rican?” The answers he gets-as implied by the project’s title, Identities are Changeable: Tales from the Diaspora-are various, malleable and interrelated. To reflect that, the music Zenón wrote is shot through with interlocking time signatures. “As a means to represent this unique concept of identity (multiple and changeable) in the music itself,” his notes continue, “all of the compositions explore the idea of multiple rhythmic structures coexisting with each other (e.g., 5 against 7, 3 against 2, 5 against 3). In addition, each piece is meant to be a narrative of the different questions and concerns addressed during the interviews.”

Those rhythms were made visible whenever Zenón took a turn conducting the students in the NEC Jazz Orchestra, his right arm sinuously sketching out one pattern and his right foot-thump, thump– periodically chiming in. (Orchestra director Ken Schaphorst kept the rhythms on track similarly when Zenón was soloing or otherwise occupied.) For all that complexity, the music was engaging to the point of being downright danceable. Zenón could sometimes be seen wiggling to the music as he moistened a reed to the side of the stage while his band mates soloed.

Zenón, naturally, was the primary soloist, his alto saxophone work transcendently fleet and assured (the student musicians were clearly knocked out by it). But others got turns, too. Pianist Luis Perdomo had impressive goes at “Identities Are Changeable” and the climactic “Through Culture and Tradition.” Bassist Hans Glawischnig offered something especially rich and deep on his unaccompanied turn on “Second Generation Lullaby.” And drummer Henry Cole, the quartet’s newest member despite having joined it a decade ago, closed out “First Language” with controlled rhythmic fire. Three students got generous solo space as well, and made good use of it. Trumpeter David Neves had his on “My Home,” tenor saxophonist Hery Paz on “Same Fight,” and trombonist Quinn Carson on “First Language”-and all of them emphasized crafting something deliberate and thoughtful over playing lots of notes.

The music, in short, was smart and engaging from the opening notes of the overture “¿De Dónde Vienes?” (“Where do you come from?”) through the excerpt from that same piece repeated as an “outro” to set up Zenón grabbing a microphone and announcing the musicians and supporting cast. What set the program apart was its video component. Jason Moran had done a multimedia performance honoring Thelonious Monk in the same venue and using the same videographer, David Dempewolf, a year earlier, which offered an interesting basis for comparison. Dempewolf had been able to load up that video with numerous striking images of Monk and stories of the great man’s run-ins with bigoted policemen and background on Monk’s preparations for his famous Town Hall concert of 1959. Here Dempewolf had no such iconic images to work with, so the visual elements became more abstract. We see shifting blocks of colors and designs, images of chain-link fences and tall buildings, and repeated images of snow-the latter being a familiar aspect of “Nuyorican” life unlike that on the mother island. Shape-shifting images of snowflakes play a role, too, signaling the myriad and continually evolving conceptions of Puerto Rican identity touched on in Zenón’s series of interviews.

Those interviews are the core of Dempewolf’s video. Zenón asked his questions off-camera of a dozen or so recurring interviewees, among them a professor, the talented young bassist Luques Curtis, and Zenón’s own half sister. The subjects explored are summed up in the song titles named above: to what extent New York and Puerto Rico each feel like home (“My Home”), making common cause and sharing musical interests with other Latin groups and African-Americans (“Same Fight”), how bilingualism or lack thereof shapes Nuyorican lives (“First Language”). Zenón’s toddler nephew makes an appearance during “Second Generation Lullaby,” his New York-raised sister coaxing from him the name of the island his grandparents are from.

But all of those built toward “Through Culture and Tradition,” the segment focusing on people’s relationship with Puerto Rican music. A middle-aged woman talks about thinking that all Puerto Ricans sing, an assumption she took from the music her family was always making at home as she was growing up, and how she was surprised to find that less prevalent on the island itself when she traveled there. Curtis, who had earlier acknowledged his lack of Spanish fluency, speaks of his attraction to Puerto Rican music being even stronger than his attraction to jazz. A man describes his being pulled hardest toward his Puerto Rican heritage by its popular music forms such as bomba and plena.

That Zenón would zero in on Puerto Rican music should be no surprise. He has mined different aspects of it before on such albums as Jibaro, Esta Plena and Alma Adentro: The Puerto Rican Songbook. It also makes sense that, settled in New York as a new father, Zenón has the issue of Puerto Rican identity on his mind more explicitly than ever. To catch this performance live, then, was more than a musical treat. It was a chance to better grasp where Zenón himself is coming from.

Among the many physical, spiritual, and institutional losses related to the still-ongoing pandemic is that of Los Angeles’ renowned Playboy Jazz Festival (PJF) at the … END_OF_DOCUMENT_TOKEN_TO_BE_REPLACED

It’s difficult to imagine what the stage and the audience would have looked like at Gaillard Center in Charleston, South Carolina, if Rhiannon Giddens’ new … END_OF_DOCUMENT_TOKEN_TO_BE_REPLACED

“It’s time to imagine a place where we can come together,” Danilo Pérez said from the hallowed stage of Washington, D.C.’s historic Sixth & I … END_OF_DOCUMENT_TOKEN_TO_BE_REPLACED

At the Zeiders American Dream Theater in Virginia Beach, Va., between April 8 and 10, the Vocal Jazz Summit convened in person for the first … END_OF_DOCUMENT_TOKEN_TO_BE_REPLACED