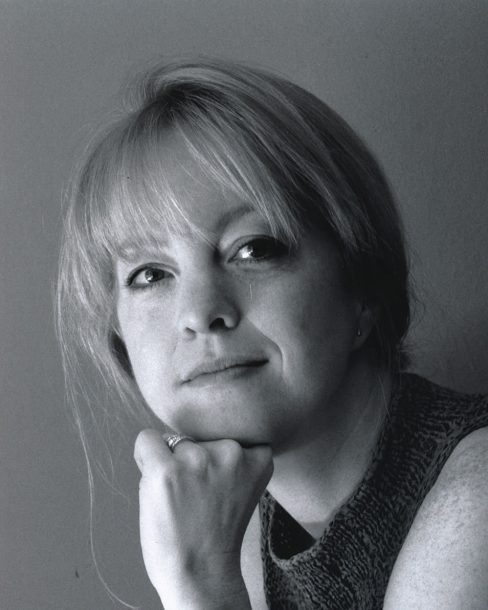 At the first show of a five-night run at Manhattan’s Jazz Standard, prior to performing “Cerulean Skies,” her last number of the set, Maria Schneider invited the audience to be birds. Schneider doesn’t think small, so even though she had nearly 20 musicians in her employ to flesh out her creations, she required additional sound. The song, she explained, set in an imaginary forest in Brazil, was inspired by her love of birding. She is fascinated by the physiological changes through which a bird goes when it gets the “urge,” and although tenor saxophonist Donny McCaslin was to serve as the primary bird during the lengthy piece, charged with voicing that urge via his horn, the audience had been given bird whistles upon entering to help create the interactive ambience that Schneider desired. At an appointed moment, the roomful of birds took flight inside the club-which is below street level-undoubtedly confusing any pigeons that happened to be listening in.

“I’ve never heard music like that before,” one patron was overheard saying on the way out. And while that may be something of an exaggeration, it’s true that Schneider’s ambitious compositions go beyond the expected. Hers is a multifaceted, multilayered, ambidextrous music, a neo-big-band jazz informed by classical convention, tightly structured but playful enough to allow for individual expression. It’s accessible and easy on the ear, but complex and daring enough to earn accolades from jazz veterans as well as those who might have walked in off the street.

Schneider doesn’t play an instrument herself, but her bodily movements as she conducted her musicians were an essential component of the show. She waved her arms in a flowing, graceful but precise motion, and she swayed, providing a dynamic focal point for the expansive sound-it may have seemed as though the musicians weren’t paying attention to her as they concentrated on their performances, but she served as an undeniable motivating factor as she faced them and authoritatively directed them.

Three of the four extensive pieces performed at the early show came from Sky Blue, the Maria Schneider Orchestra’s recent CD on artistShare. The album’s title is not whimsical; these songs evoke the great outdoors and the grandeur of nature. Schneider is originally from a small town in Minnesota, and open spaces are a part of her core being. “The ‘Pretty’ Road,” another song from the new album performed at Jazz Standard, was named, she said, after just that, a place in her hometown that fits the description. The song is plugged full of memories, but as is her way, Schneider was in no hurry to get to them all. Frank Kimbrough’s moody piano introduced the theme, and slowly but steadily the song unfolded into a pastoral vista painted by a battery of trumpets, trombones and reeds. Ingrid Jensen’s flugelhorn solo gave it its deeper colorings, and a sampled meadowlark (more birdsong) connected the road to the blue sky of the album’s title.

Schneider uses her soloists sparingly but judiciously. Chris Cheeks’ tenor solo during the opening number, “Evanescence,” the title track from an earlier album, rose and fell as the larger sound of the ensemble itself ebbed and flowed. Marshall Gilkes’ trombone, later on in the song, came in at a crucial juncture when the big band temporarily shrunk; only piano, bass (Scott Colley) and Clarence Penn’s light drum touch accompanying him. Yet even in its smaller state this was a sound that filled every space-perfectly in sync, crisp and smart, it’s a music that’s constantly in transition, rich in tonal qualities, conscious of its every move. In “Cerulean Skies,” Gary Versace’s accordion, paired with McCaslin’s tenor, suggested a tango, another dimension to Schneider’s imaginary forest. Schneider’s music thrives on such diversity of disposition and setting.

“Aires de Lando,” the other Sky Blue piece performed, was owned by clarinetist Scott Robinson, whose winding solo never let up. Based on a Peruvian rhythm-Schneider explained it mathematically, commenting on its “multi meters” and losing pretty much everyone in the room who hadn’t studied Einstein-the song is an intricate piece of interlocking, complementary parts. Its polyrhythms-aided in large part by two cajon players, Jon Wikan and Jorge Perez-often gave way to brief spurts of sound that came and went without notice, gliding from one temperament to another easily.

Schneider, a genial host lacking airs and as exuberant as her beloved birds in flight, put her arms down, occasionally kneeled and faced her orchestra, just taking it all in. As much as anyone she was in awe of what she was hearing.

“It’s time to imagine a place where we can come together,” Danilo Pérez said from the hallowed stage of Washington, D.C.’s historic Sixth & I … END_OF_DOCUMENT_TOKEN_TO_BE_REPLACED

At the Zeiders American Dream Theater in Virginia Beach, Va., between April 8 and 10, the Vocal Jazz Summit convened in person for the first … END_OF_DOCUMENT_TOKEN_TO_BE_REPLACED

The Big Ears Festival returned to Knoxville in a big way in late March, drawing an estimated 30,000 music enthusiasts from across the U.S. and … END_OF_DOCUMENT_TOKEN_TO_BE_REPLACED

Let’s get this out of the way: The Savannah Music Festival is not a jazz festival. Held over the course of 17 days in late … END_OF_DOCUMENT_TOKEN_TO_BE_REPLACED