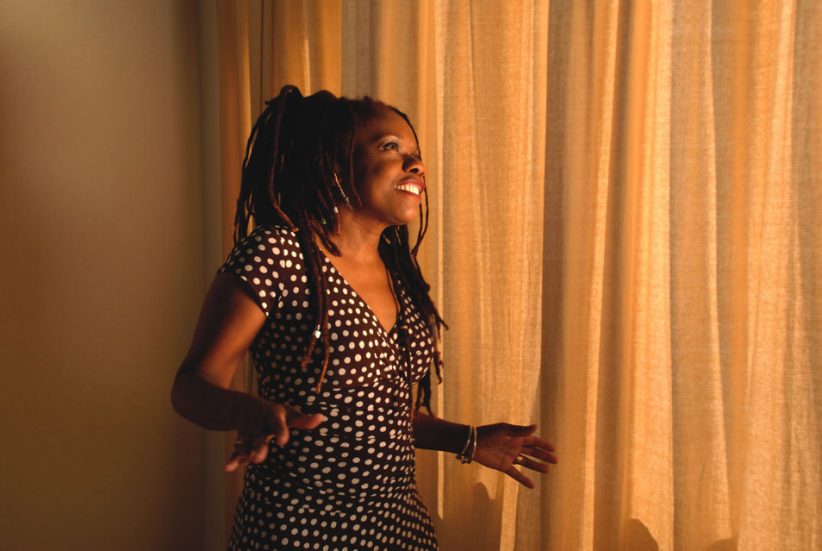 It was easy enough to get that time-tunnel feeling at Joe’s Pub in Manhattan when Catherine Russell (pictured) and the Carolina Chocolate Drops shared a bill. Nearly all of the songs comprising Russell’s set, drawn largely from her forthcoming Sentimental Streak album (World Village), were originally performed by pre-rock-era jazz and blues icons such as Alberta Hunter, Bessie Smith, Pearl Bailey and Louis Armstrong, and her arrangements rarely deviated from those of the source material. Opening for Russell, the Carolina Chocolate Drops, a trio bent on reviving the pre-blues African-American Piedmont string-band tradition, made a glorious racket with their fiddles, banjos and resonator guitars.

Backed by piano (Mark Shane), guitar (Matt Munisteri) and standup bass (Lee Hudson), Russell didn’t so much interpret as pay tribute. Unlike so many other vocalists today, she isn’t obsessed with the Great American Songbook so much as the Great American Singers. It’s telling, in fact, that when she introduced each song, Russell usually cited not its writer but the performer on whose original recording she was basing her rendition. If she can be accused of anything, though, it’s that she doesn’t bring much new to these oldies-the overall sound is contemporary, but Russell sees her role as presenting these old songs as they were intended. And she’s very good at it.

Russell’s got a set of pipes. When she took on Smith’s “Kitchen Man,” Hoagy Carmichael’s “New Orleans” and the set-opening “You For Me, Me For You,” from a 1926 Hunter recording, Russell exhibited a stunning control of dynamics and embodied soulfulness. She swayed and danced gently as she threw herself fully into the lyrics, alternately belting and finessing as required. Her musicians rarely stretched out-although when they soloed, they were mighty impressive-and so Russell, and the songs themselves, maintained focus from start to finish.

She was masterful at conveying mood. There was a sly wink to “I’ve Got That Thing,” a song co-written by her late dad, the Panamanian pianist and bandleader Luis Russell, who served for some time as Louis Armstrong’s musical director. Bailey’s 1947 “I’m Lazy, That’s All” was imbued with humor, and Russell’s take on the Dinah Washington blues “My Man’s an Undertaker,” from her first album, Cat, was as funky as you’d expect a song with that title to be. Russell’s newest cover, a 1964 Sam Cooke ballad called “Put Me Down Easy,” also from the debut, was smooth. With the pianist sitting it out and Russell plucking the mandolin, she let it be known with that tune that her interests go beyond what the rest of the set list indicated (she’s an ardent fan of everything from classic rock-the debut included a Grateful Dead song-to Merle Haggard’s country) and that she is able to harness music from within any genre and era, even if she more often chooses to dwell in a musical world preceding her own birth.

The Carolina Chocolate Drops go back even further. Without doing a little bit of homework, a listener stumbling upon the trio might just think of them as a stripped-down bluegrass band. But their chosen music predates not only bluegrass but also the commercial advent of the blues. Borrowing their name from a black string band called the Tennessee Chocolate Drops, the CCD play a revved-up brand of acoustic dance-party music that was popular among blacks in the Carolinas and Tennessee during the 1920s and ’30s and then largely disappeared. Rhiannon Giddens, Justin Robinson and Dom Flemons, all of whom sing, met at a festival devoted specifically to black banjo music, discovered their mutual-and quite rare among young African-Americans in today’s world-love for this old-timey music and formed the group that has since garnered substantial praise.

Theirs is a raucous, festive sound. On “Georgie Buck,” a song they learned from octogenarian fiddler Joe Thompson and which is included on their CD Dona Got a Ramblin’ Mind (Music Maker), the Drops transformed into a jug band, with Flemons blowing percussively into the vessel, and for “Will Adams Breakdown,” Flemons took brushes to snare as the group emulated a colonial-era fife and drum band. “Viper Mad,” a song acquired via Sidney Bechet and the Woody Allen flick Sweet & Lowdown, was appropriately slinky, and “Sourwood Mountain,” which closes the album and also ended their set at Joe’s, served as the vehicle for an audience participation deal that had the Manhattan clubbers gladly contributing the “hi-ho-the-fiddle-eye-day” chorus.

At one point during their set, Giddens noted that, despite their predilection toward this ancient music, the members of the Carolina Chocolate Drops-who also dress the part, suspenders and all-actually do own laptops and iPods. That may be so, but they’re serving the greater good by resurrecting a world when the Victrola was the hottest technology around.

“It’s time to imagine a place where we can come together,” Danilo Pérez said from the hallowed stage of Washington, D.C.’s historic Sixth & I … END_OF_DOCUMENT_TOKEN_TO_BE_REPLACED

At the Zeiders American Dream Theater in Virginia Beach, Va., between April 8 and 10, the Vocal Jazz Summit convened in person for the first … END_OF_DOCUMENT_TOKEN_TO_BE_REPLACED

The Big Ears Festival returned to Knoxville in a big way in late March, drawing an estimated 30,000 music enthusiasts from across the U.S. and … END_OF_DOCUMENT_TOKEN_TO_BE_REPLACED

Let’s get this out of the way: The Savannah Music Festival is not a jazz festival. Held over the course of 17 days in late … END_OF_DOCUMENT_TOKEN_TO_BE_REPLACED