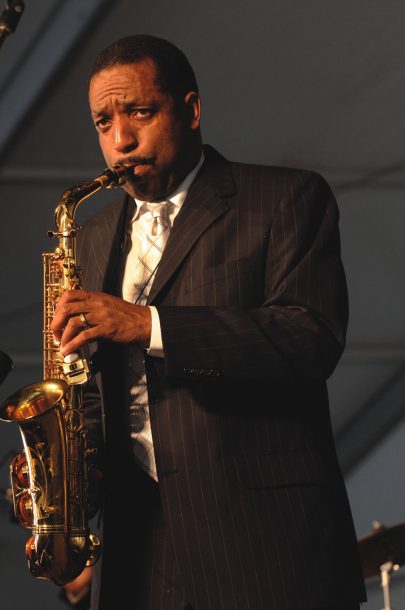 Frederiksted, on St. Croix, largest of the U.S. Virgin Islands, with a population under 55,000, was boldly shaken out its tranquility for the first Blue Bay Jazz Festival. Exuberant and freewheeling musicians from New Orleans, which the islanders feel embodies a collective spirit and artistry similar to their own, enacted the frivolity of Mardi Gras and JazzFest. In second-line fashion, the opening Trumpet Summit generated excitement, initially playing and marching through the audience. They congregated in the picturesque park-like shoreline area, bordered by boats, shops, restaurants and bars. Once onstage with the sunlight serenely fading away, brothers James “12” and Troy “Trombone Shorty” Andrews (featured playing mostly trombone the next day), Christian Scott and Marlon Jordan dynamically interacted in unison and for scorching solos.

In response, the normally laid-back crowd, with a small percentage of vacationing visitors, danced to the distinctive Crescent City rhythms. Traditional jazz and R&B were melded for the venerable classic “St. James Infirmary,” which showcased the Andrews brothers, playing and singing. Solidly backing them were supporting musicians, also from New Orleans. While playing the song, they competitively delivered high-flying solos and engaged in scatting, led by James, the older sibling. In contrast, Jordan and Scott, who showcased his own music and band the following night, coolly came together for a pulsating rendition of “Softly as in the Early Morning Sunrise.”

Vocalist Stephanie Jordan, Marlon’s sister, who performed a set later in the evening with him and other family members, provided a pleasing change of pace by inserting feminine touches to the testosterone-dominant trumpet blowout. In truth, she threw the audience off, yet surprisingly captivated them with grace and a bit of New Orleans sass, singing “Our Love is Here to Stay.” Additionally, the Summit players and alto saxophonist Donald Harrison (pictured), the festival headliner, tastefully accentuated her performance. After garnering strong applause and ovations from the festival attendees, Jordan commented that she and the band weren’t going home, but instead were moving in.

Jordan further made herself comfortable through the standard, “Ain’t Misbehavin’.” Its vintage qualities were perfect for the occasion, providing ample room for the trumpeters to superbly solo and the singer to work in tandem with them. The celebration was in its prime by then and inspired the musicians to conjure up their city’s best-known number, “When the Saints Go Marching in.” As would be expected, the audience responded jubilantly as the younger Andrews and Scott alternated singing verses, in between trumpet solos and choruses. The set could have justifiably ended there, but carried on when St. Croix’s own, singer, Carolyn Grant, shifted the focus to blues with “Stormy Monday.” Afterwards, the Trumpet Summit concluded with a traditional New Orleans shuffle laden with solos, including one from the drummer.

Headliner Harrison contrarily was more pop-oriented than the Summit and other festival performers. Nonetheless, everything he performed was strongly New Orleans-flavored. The chestnut “What a Wonderful World” was a perfect example, featuring the saxophonist’s most soulful and earthy singing. He sharply broke away from tradition though by launching into the Jackson 5’s landmark “ABC.” It drew a favorable reaction that transcended into a fun occasion for the festival attendees. The saxophonist continued with contemporary grooves, all the while dancing and singing to the audience’s delight. Still, “Mr. Magic,” always a crowd pleaser, took the excitement to another level, even inspiring a group of women to break into the Electric Slide dance routine, due to Harrison and the band’s remarkable cohesiveness.

Almost like an infomercial saying “Wait, there’s more,” the bandleader introduced keyboardist Henry Butler, who had previously played a stirring segment on the first night. With the band they whipped up a frenzy of New Orleans barrelhouse blues, R&B and jazz, including Harrison furiously scatting. The Andrews brothers and Jordan got involved as well, to make the powerful jam much like one in their hometown. Regarding it, Edith Baptiste, wife of the deceased saxophonist and educator Alvin Baptiste, an important influence on Harrison, Butler and many other Crescent City players, leaped into a poetic and fiery oratory. The blind pianist interwove subtle patterns behind her as the audience, not expecting anything of that nature, respectfully listened and applauded afterwards.

Supplementing the tribute, Harrison and cohorts conjured up their esteemed mentor’s “Venus Flow,” which seeped with New Orleans blues and jazz motifs. Subsequently, the headlining saxophonist featured an original funk-based tune, overflowing with solos from all, including the rhythm section. After a customary encore loaded with even more hard-driving playing, the spirited and fun-filled festival came to a close. Without a doubt, the multi-day event will return in 2008. Its only blemish was trumpeter/singer Kermit Ruffins, known to be averse to touring, being a no-show. Hopefully, the news of the great time his counterparts had will get him to consider coming in the future.

“It’s time to imagine a place where we can come together,” Danilo Pérez said from the hallowed stage of Washington, D.C.’s historic Sixth & I … END_OF_DOCUMENT_TOKEN_TO_BE_REPLACED

At the Zeiders American Dream Theater in Virginia Beach, Va., between April 8 and 10, the Vocal Jazz Summit convened in person for the first … END_OF_DOCUMENT_TOKEN_TO_BE_REPLACED

The Big Ears Festival returned to Knoxville in a big way in late March, drawing an estimated 30,000 music enthusiasts from across the U.S. and … END_OF_DOCUMENT_TOKEN_TO_BE_REPLACED

Let’s get this out of the way: The Savannah Music Festival is not a jazz festival. Held over the course of 17 days in late … END_OF_DOCUMENT_TOKEN_TO_BE_REPLACED