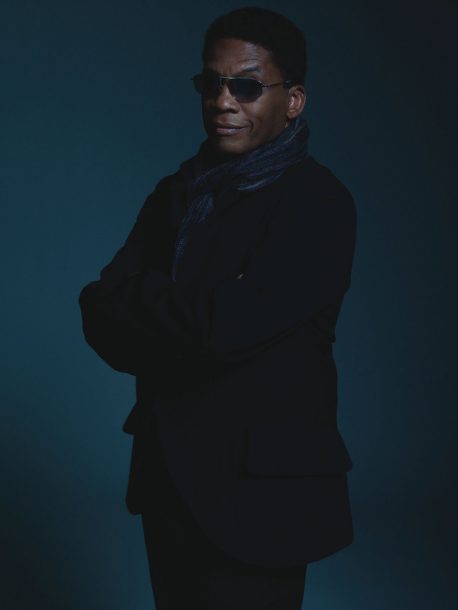 The least-known persons on the stage on Oct. 29 at the Kodak Theatre in Hollywood were a trio of young trumpet players: Jean Gaze from Haiti, Ambrose Akinmusire from Oakland and Michael Rodriguez from New York City. Surrounding them on the program was an instantly recognizable array of glittering music world figures reaching from Al Jarreau, Quincy Jones and Nancy Wilson to Herbie Hancock (pictured), Joni Mitchell and Sting.

The three trumpeters were there, of course, as the finalists in the 20th annual Thelonious Monk Competition. The stars were there to raise money for more competitions. Call it a success on both endeavors. If the Monk Institute folks know anything, it’s how to have a competition and how to raise money.

It was the first time the Monk Competition had taken place on the West Coast, and only the second time in its two decades that it had left its home base in Washington, D.C. According to Tom Carter, the Institute’s president, “This year, our hall, the Eisenhower Theatre, is under renovation, so we thought, what a great opportunity to take the competition to Los Angeles.”

It was also a good time to offer some compensatory programming to L.A., after the Institute’s decision to relocate the Monk Institute of Jazz Performance from the University of Southern California campus to Loyola University of New Orleans as part of its “Commitment to New Orleans” initiative. And, of course, to present that programming in a high-visibility entertainment-world setting—the Kodak is the home of the Academy Awards.

Undoubtedly with that setting in mind, this year’s program made the most of the traditional two-part approach to the event, in which the competition leads into an entertainment gala featuring a collection of jazz all-stars (which usually includes such Monk Institute members as Wayne Shorter, Herbie Hancock, Terence Blanchard and Thelonious Monk, Jr.). But past events have rarely had the magnitude of the assemblage of stars that showed up for the Kodak program, including—in addition to Shorter, Hancock, Blanchard and Monk, Jr.—Mitchell, Wilson, Sting, Chris Botti, Jarreau, George Duke, Roy Hargrove, George Benson and Hubert Laws, as well as a stellar list of supporting players.

No wonder the Kodak was packed, and the red carpet entry drew the sort of media coverage rarely seen in the jazz world.

The evening began with a set of performances by the three finalists—Gaze, Akinmusire and Rodriguez—accompanied by the versatile rhythm team of pianist Geoff Keezer, bassist Reginald Veal and drummer Carl Allen. After their solo numbers, they were joined by Jarreau and Duke to perform a group of standards, presumably to display their mainstream skills. Although Rodriguez played with flair and enthusiasm, it seemed apparent that the choice would be between the edgy, outside playing of Akinmusire and Gaze’s adroit mastery of 50 years of trumpet styles. The panel of trumpet-playing judges—Hargrove, Blanchard, Clark Terry, Hugh Masekela, Herb Alpert and Jones—selected Akinmusire as the first place winner.

The competition settled, it was on to the balance of the show, which was structured around a tribute to Hancock, who is the Chairman of the Institute’s Board of Trustees and the first recipient of an award created in his name: the Herbie Hancock Humanitarian Award.

Although the competition had honored non-commercial adventurousness in the first-place choice of Akinmusire—as well as the selection of Greece’s Petros Saikelliou as the winner of the BMI Composers Competition—the Hancock tribute, making a 180-degree turn, elected to emphasize the veteran pianist/composer’s various flirtations and successes with pop, rock, funk and electronica.

With Hollywood celebrities Louis Gossett, Jr. and Jamie Foxx providing introductions, Hargrove and Benson ventured through “Cantaloupe Island,” Laws added “Butterfly,” and a high-decibel rendering of “Rockit” was enhanced by the brisk hip-hop moves of the Debbie Allen Dance Academy.

Wilson’s “‘Round Midnight” was a welcomed reference to Monk, as well as Hancock’s Academy Award-winning score for the film of the same name.

But it wasn’t until the stage-full of percussionists, keyboardists and guitarists had been replaced by Hancock, Shorter, bassist John Patitucci and drummer Vinnie Colaiuta—performing “Maiden Voyage”—that the celebration reached toward its much anticipated high points. They were joined by Mitchell, singing her own “Tea Leaf Prophecy” and “Hana,” with a tonal warmth and rhythmic phrasing defining the impact that jazz has had upon her mature singing style. Next up, Sting and trumpeter Botti recalled Hancock’s classic years with Miles Davis via an atmospheric reading of “My Funny Valentine.” The evening concluded with Akinmusire, Hargrove and Blanchard in a three-trumpet romp through Hancock’s “Chameleon,” and a standing ovation from the capacity audience.

Sadly, the semi-finals of the competition on the afternoon of Saturday, Oct. 28, drew a vastly smaller crowd and even less media. It’s a fair guess that UCLA’s Schoenberg Hall, seating 528, was less than half-filled for the four hour program, in which the 10 semi-finalists played three numbers each with the hardy rhythm team of pianist Keezer, Veal and Allen. That’s a marathon event, by any standards, and the judges deserve plenty of props for delivering what seemed, from this observer’s point of view, to be a fair and reasoned selection.

Although they didn’t make it to the finals, the remaining trumpeters in this year’s semi-final competition all displayed the potential for stellar jazz careers. Remember their names: Maurice Brown from Chicago, Philip Dizack from Milwaukee, Josh Evans from Hartford, Vitaly Golovnev from Russia, Tobias Kaemmerer from Milwaukee, Nadje Noordhuis from Australia and Charlie Porter from Florida.

“It’s time to imagine a place where we can come together,” Danilo Pérez said from the hallowed stage of Washington, D.C.’s historic Sixth & I … END_OF_DOCUMENT_TOKEN_TO_BE_REPLACED

At the Zeiders American Dream Theater in Virginia Beach, Va., between April 8 and 10, the Vocal Jazz Summit convened in person for the first … END_OF_DOCUMENT_TOKEN_TO_BE_REPLACED

The Big Ears Festival returned to Knoxville in a big way in late March, drawing an estimated 30,000 music enthusiasts from across the U.S. and … END_OF_DOCUMENT_TOKEN_TO_BE_REPLACED

Let’s get this out of the way: The Savannah Music Festival is not a jazz festival. Held over the course of 17 days in late … END_OF_DOCUMENT_TOKEN_TO_BE_REPLACED