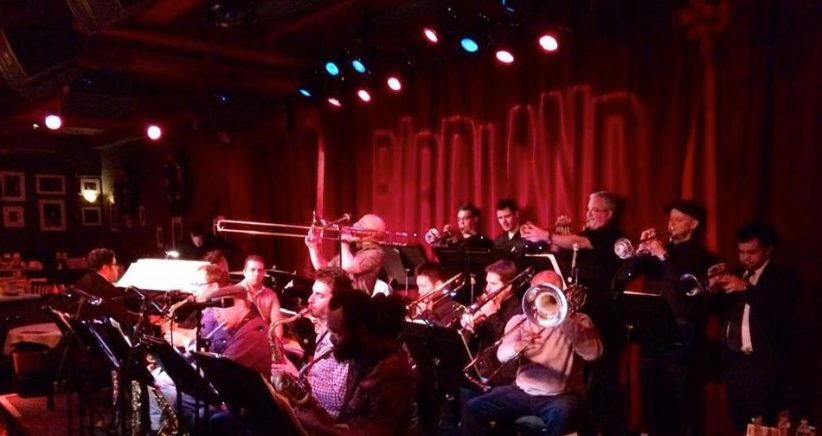 At its best, a big band presents a listener with a tantalizing dilemma-what should my ears focus on at the moment, and when should I shift my attention elsewhere?-while still offering big-picture musical satisfaction. Those aural pleasures were immediately demonstrated when the Arturo O’Farrill Afro Latin Jazz Orchestra kicked into “Compay Doug,” at the start of another Sunday evening’s two sets in the celebrated big band’s long-running weekly residency at Birdland.

Over the boiling rhythms of drummer Zack O’Farrill (Arturo’s son), and a pair of percussionists, the band’s horns expanded and contracted, sounding and rephrasing the tune’s theme via crosscurrents of lines. Along the way, the 13-minute tune opened up for bassist Gregg August’s long bowed solo, bolstered by his imaginative use of overtones and harmonics, as well as the leader’s piano solo, and turns by tenor saxophonist Chad Lefkowitz-Brown and trombonist Frank Cohen.

The band, just nominated for another Grammy, for The Offense of the Drum (Motéma), and preparing for a mid-December trip to Cuba to perform and record, over the course of two sets offered a rangy mix of its extensive repertoire. “Delirio,” a trombone-fired ballad from 2013’s Latin Grammy-winning Final Night at Birdland, featured Bobby Porcelli’s sweet but commanding alto solo, while the richly textured, Peruvian-tinted “El Sur,” from 2011’s 40 Acres and a Burro, incorporated serpentine sax-section lines, heavy brass punches and a rhythm breakdown featuring Tony Rosa on congas. “Jazz Twins,” written for a pair of ardent supporters of the band, opened with a distinctive bass-piano-bass trombone line before moving to brass choir sounds and opening up for multiple soloists, including trumpeter Jonathan Powell.

O’Farrill, the composer and/or arranger of many pieces in the band’s book, is nothing if not democratic with allocating solos, including those by, among others, trumpeter John Bailey and baritone saxophonist Jason Marshall on a piece saluting Mario Bauza (O’Farrill also name-checked his debts to Tito Puente, Machito and his father, Chico O’Farrill); and Porcelli and August, again, on “La Puerta,” from 2000’s A Night in Tunisia.

The second set brought another round of imaginative colorations and driving Latin grooves, with tunes including a lush arrangement of McCoy Tyner’s “Fly With the Wind,” with trombonist Earl McIntyre, and Chico O’Farrill’s bouncy “Havana Blues,” with Cohen and trumpeter John Walsh. The home-venue crowd, including the Mexican-born bandleader’s mother, Lupe, demonstrated great appreciation.

The 2022 Newport Jazz Festival’s three days of sunshine were bracketed, more or less, by a pair of all-star ensemble jams that included Christian McBride. … END_OF_DOCUMENT_TOKEN_TO_BE_REPLACED

In its first full edition since the onset of the pandemic, and with a new director of programming, the Festival International de Jazz de Montréal … END_OF_DOCUMENT_TOKEN_TO_BE_REPLACED

Among the many physical, spiritual, and institutional losses related to the still-ongoing pandemic is that of Los Angeles’ renowned Playboy Jazz Festival (PJF) at the … END_OF_DOCUMENT_TOKEN_TO_BE_REPLACED

It’s difficult to imagine what the stage and the audience would have looked like at Gaillard Center in Charleston, South Carolina, if Rhiannon Giddens’ new … END_OF_DOCUMENT_TOKEN_TO_BE_REPLACED