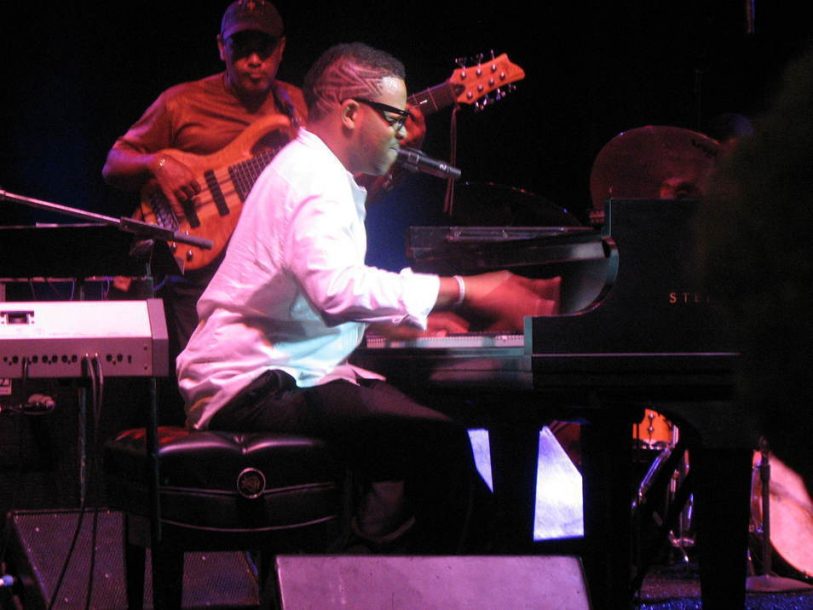 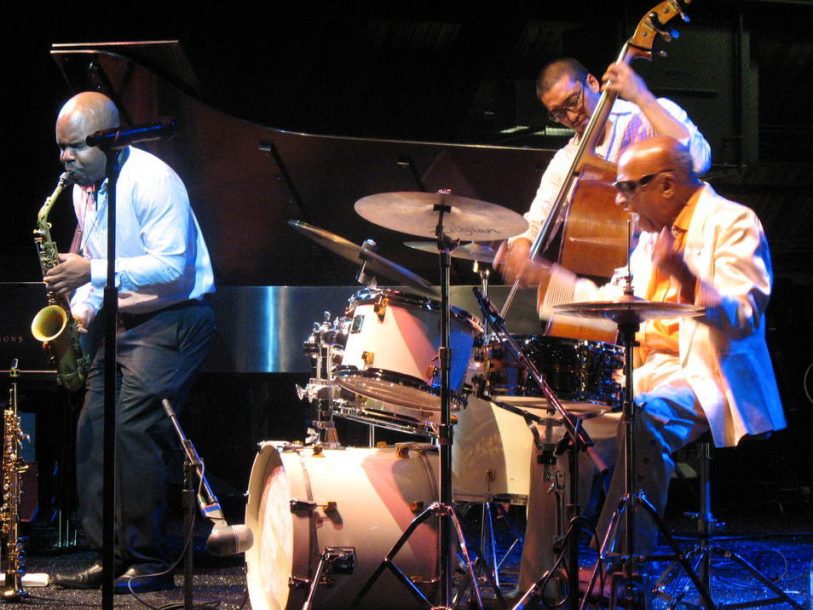 In 2009, the Litchfield Jazz Festival moved from its previous location in Goshen, Conn.-held in a huge tent with clear views of the stage from the grassy area surrounding it-to its present location on the grounds of the Kent School, where the successful month-long Litchfield Jazz Camp holds forth. In its first year in Kent, the festival was hampered by torrential rains, which caused flooding in the tent, forcing the festivities into the Springs Center hockey rink located on the Kent School grounds.

To avoid the issue of flooding, the festival moved into the spacious hockey rink in 2010 and remained an indoor event in 2011 for its 16th edition. Long-time regulars now lament the move from Goshen, where the Litchfield Jazz Festival felt more connected to the great outdoors. While the hockey rink provides protection from the elements (and it did indeed rain steadily on Saturday night), the boomy acoustics indoors are hardly ideal. And the vibe has been seriously diluted in this dark, sterile environment. Watch for the festival to move to a new location in the future, possibly by next year.

Meanwhile, the Litchfield Jazz Festival remains a major event for Connecticut jazz fans. Unfortunately, this year it was held on the same weekend as both the Newport Jazz Festival and Caramoor Jazz Festival, which probably siphoned off a significant portion of the New York crowd. Those die-hards who did show up on Saturday, August 6, were treated to performances that ranged from charming and engaging to galvanizing and transcendent. And the star of the evening was none other than the amazing Roy Haynes, who at age 86 shows no signs of slowing down.

Pianist-singer Champion Fulton charmed the crowd with her swinging style and Miss America smile on a set of old-school standards. On a rendition of “Pennies from Heaven,” the Oklahoma native flaunted a Dave McKenna-like technique, comping steady quarter notes with her left hand like Freddie Green in the Basie band while spinning facile lines with the right hand. She revealed a distinct Erroll Garner influence in her solo on a laid back version of “Stardust” while also casting a spell on the audience with her emotive vocal reading of that Hoagy Carmichael gem from 1927. Her flugelhorn-playing father, Stephen Fulton, also shined on his fluid, Clark Terry-inspired solos on an uptempo “All the Things You Are” and on the Tin Pan Alley nugget “The Song Has Ended (But the Melody Lingers On).” Backed by Quincy Davis on drums and Hide Tanaka on bass, this engaging father-daughter team won over the crowd and got the festival’s second day off to a flying start.

Vijay Iyer brought a dramatic quality to the proceedings with his probing, highly interactive trio featuring bassist Stephan Crump and drummer Marcus Gilmore. Opening with the calming, meditative “Alaska,” which had Gilmore nonchalantly subdividing and cutting up the beat in myriad creative ways, the trio continued with the odd-metered, angular, stop-time funk of “Cardio” and the luminous (and as-yet-unrecorded) “Optimism,” which built to a driving crescendo propelled by Gilmore’s polyrhythmic pulse. Other highlights of their stirring set included a faithful interpretation of Henry Threadgill’s “Little Pocket Size Demons” (which Iyer called “a piece that changed my life”) and a radical reimagining of Michael Jackson’s “Human Nature” (which Iyer covered last year on his Solo recording). Their dynamic set closed with “Actions Speak,” a whirlwind drum feature for the remarkable young Gilmore.

Louisiana native (and current Harlem resident) Davell Crawford won over the crowd with his formidable keyboard skills, passionate vocals and extroverted stage presence during his inspired set in tribute to an obvious towering influence, Ray Charles. The grandson of James “Sugarboy” Crawford (who wrote the N’awlins anthem “Iko Iko”), Crawford is part of the great New Orleans piano lineage that continues from Tuts Washington and Professor Longhair to James Booker, Allen Toussaint and Mac (Dr. John) Rebennack. Infusing his rock ‘n’ roll soul with sanctified gospel-holler vocals, Crawford conjured up a rhumba boogie vibe on “Mary Ann,” underscored by an authentic second line groove from Marcus Gilmore, still warm from his set with Vijay Iyer’s trio. Crawford expertly covered Charles’ waltz-time arrangement of “Oh, What A Beautiful Morning,” then took the gospel-country anthem “I Can’t Stop Loving You” at a languid “Drown in My Own Tears” tempo. He also offered jaunty renditions of “Hit the Road Jack” and “My Little Margie” and turned in a churchified “Georgia,” accompanying himself on Hammond B-3 organ, that had someone in the audience shouting, “Amen!” And of course, there was the obligatory cover of Charles’ “What’d I Say,” in which Crawford engaged the excited audience in some vocal call-and-response.

After master of ceremonies and Litchfield artist-in-residence Matt Wilson auctioned off a Zidjian cymbal signed by Roy Haynes (which fetched $1,600 as a donation toward the Litchfield Jazz Camp), the drumming legend took the stage in a white silk suit and proceeded to hold the crowd in awe with his razor-sharp instincts on the kit in the company of his Fountain of Youth Band (Martin Bejerano on piano, David Wong on bass, Jaleel Shaw on alto and soprano saxes). They opened with the sprightly and aptly titled “Summer Nights,” a tune set up for Haynes’ quick-handed fills. A sparkling version of Pat Metheny’s “James” was followed by a hauntingly beautiful rendition of “It’s Easy to Remember,” a Richard Rodgers-Lorenz Hart ballad primarily known to jazz fans for renditions by Billie Holiday and John Coltrane. Haynes laid back with brushes on this lush number, allowing both Shaw and Bejerano to shine on their expressive solos. Bassist Wong, an anchor throughout, also proved to be a strong melodic improviser here as Haynes underscored with elegant brushes and subtle mallet work.

For swing factor and sheer hipness, few drummers can touch Haynes on his interpretation of Thelonious Monk’s “Trinkle Tinkle.” Shaw and Bejerano also engaged in some fiery exchanges on this chops-busting Monk anthem. Bejerano also showcased his inventive instincts on a solo piano intro to “Alone Together.” For his crowd-pleasing finale, the ageless Haynes and his young charges led the audience in a sing-along to the nostalgic “Anniversary Waltz,” putting the capper on the second day of this clambake in Kent.

“It’s time to imagine a place where we can come together,” Danilo Pérez said from the hallowed stage of Washington, D.C.’s historic Sixth & I … END_OF_DOCUMENT_TOKEN_TO_BE_REPLACED

At the Zeiders American Dream Theater in Virginia Beach, Va., between April 8 and 10, the Vocal Jazz Summit convened in person for the first … END_OF_DOCUMENT_TOKEN_TO_BE_REPLACED

The Big Ears Festival returned to Knoxville in a big way in late March, drawing an estimated 30,000 music enthusiasts from across the U.S. and … END_OF_DOCUMENT_TOKEN_TO_BE_REPLACED

Let’s get this out of the way: The Savannah Music Festival is not a jazz festival. Held over the course of 17 days in late … END_OF_DOCUMENT_TOKEN_TO_BE_REPLACED