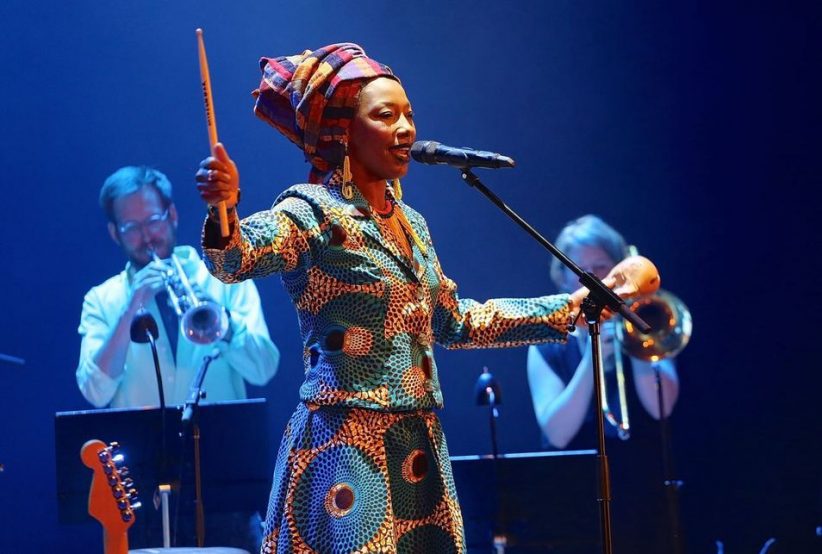 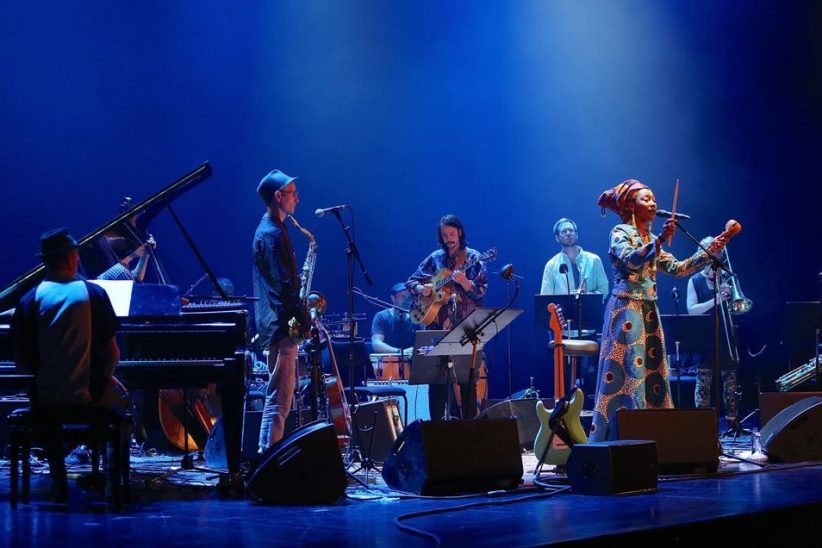 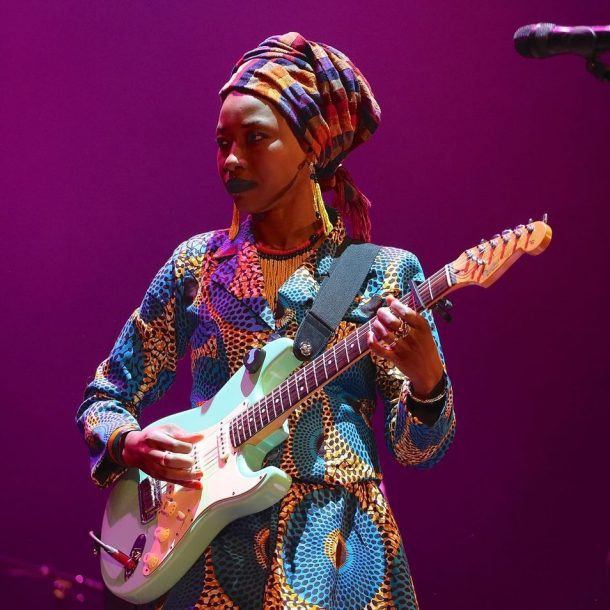 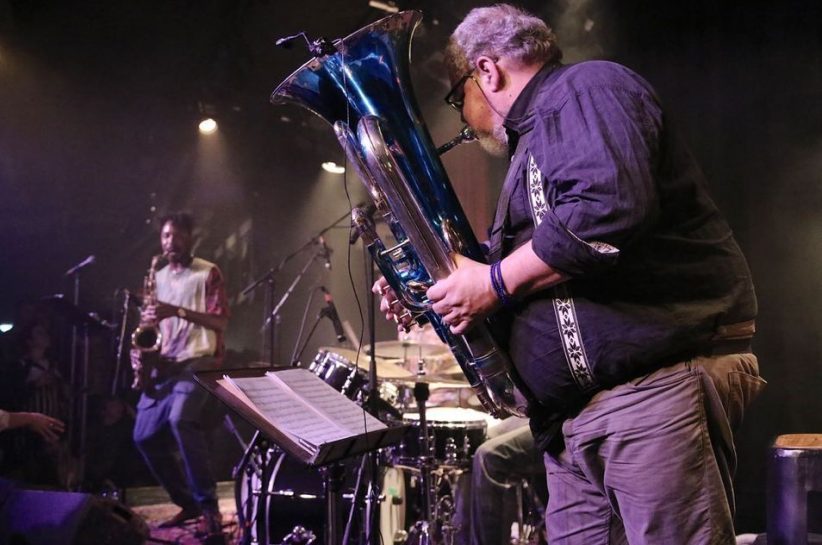 Sons of Kemet at the club Fasching; Stockholm Jazz Festival 2016 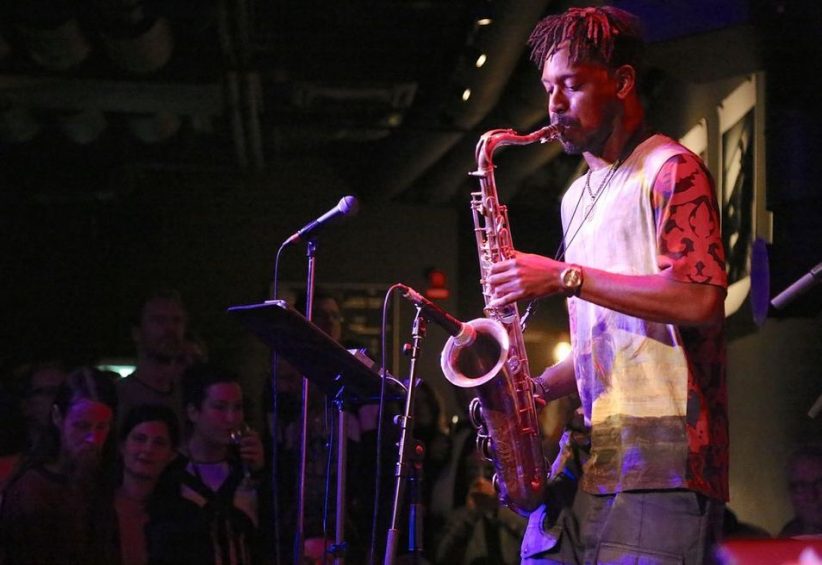 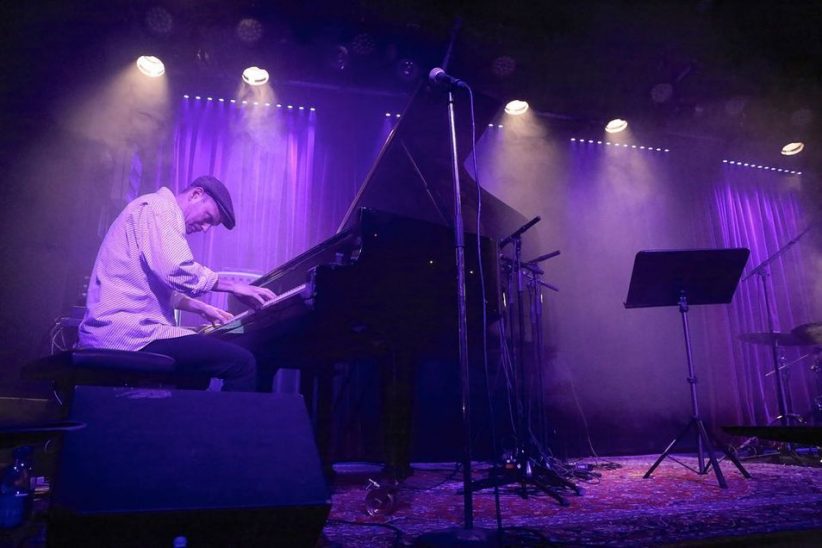 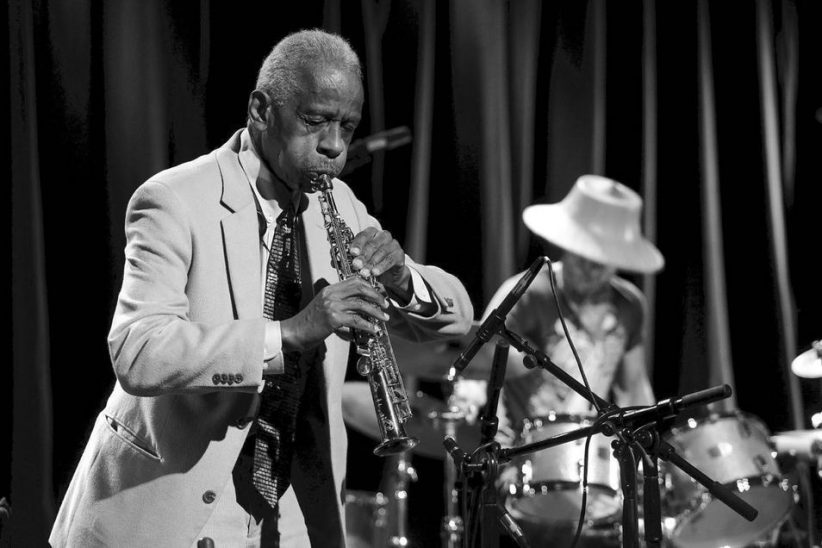 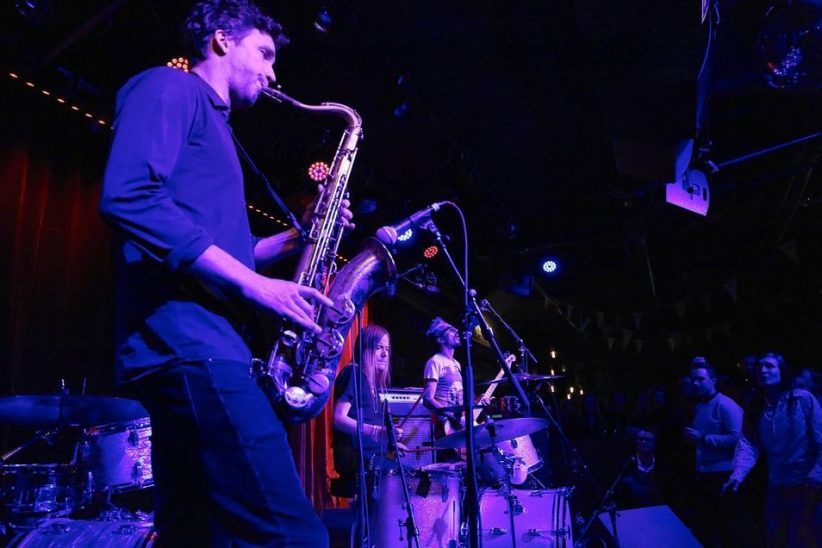 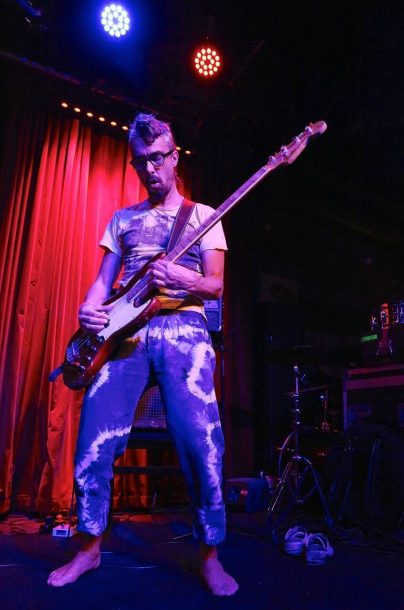 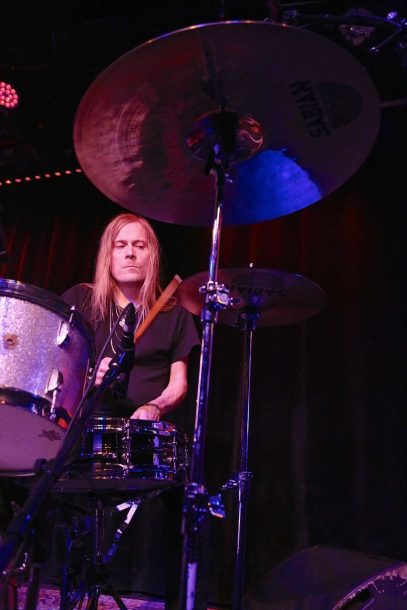 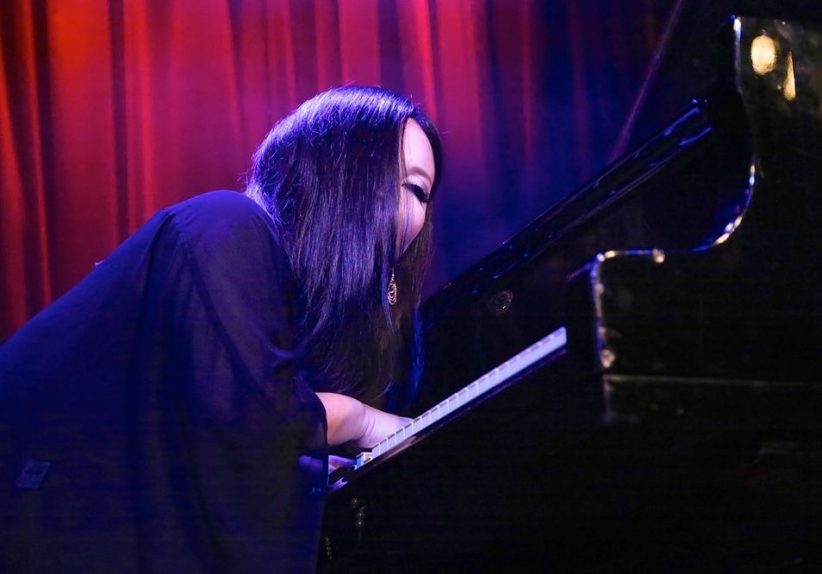 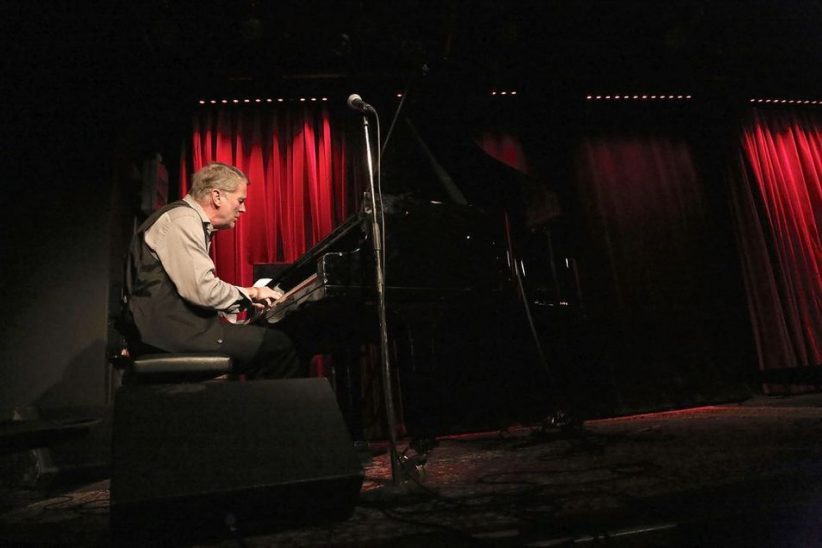 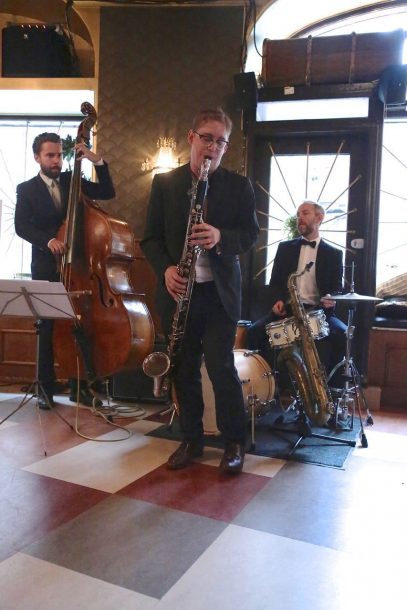 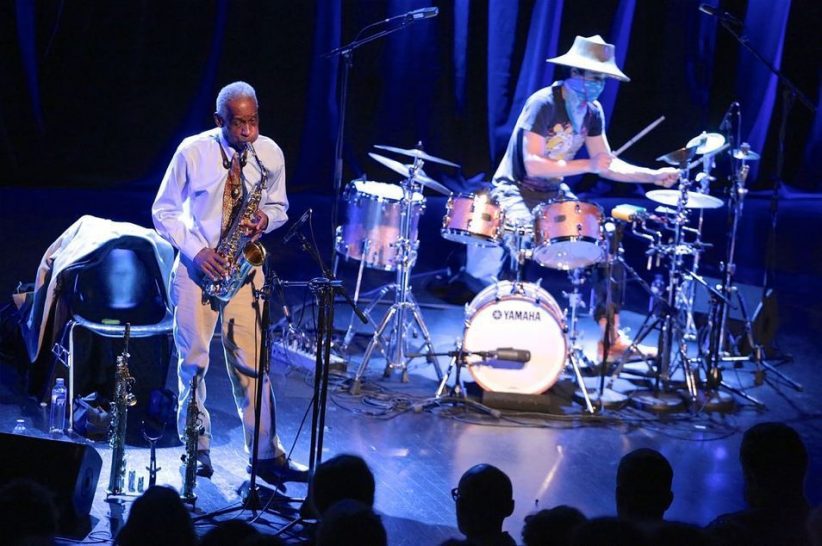 On Oct. 8, closing a triple bill early into the weeklong 2016 Stockholm Jazz Festival, the pianist Bobo Stenson allowed me to understand jazz’s best-known solo piano performer, Keith Jarrett, with a fresh and meaningful perspective. Stenson, perhaps Sweden’s most important jazz export at age 72, flowed through one sterling melody after another, tinged with deeply felt undertones of gospel and R&B and the bittersweet, romantic soul that descends from Bill Evans. It was concert-hall-caliber music played in a nightclub-a terrific and acoustically capable one, called Fasching-and it somehow took Jarrett’s playing out of relief and immersed it into a generation of brilliantly affecting melodists that includes Stenson, Steve Kuhn and others. The set was a reminder to not be satisfied with institutional knowledge and collective wisdom, to look beyond the data you’ve been given.

In fact, the Stockholm festival as a whole delivered this message. The few days I spent there earlier this month were full of discovery, dense with the beginnings of new rabbit holes. And full of self-examination, with questions like: Why don’t I already know about these musicians? What other players and scenes exist in my blind spots? Am I receiving-and, in my position, disseminating-the most worthwhile information? After covering and following a jazz-festival circuit that seems more and more homogenous to me with each passing year, unfamiliar felt very good.

The setting for this music, however, worked in the opposite way; it was resolutely hospitable and comfortable, even for a tourist. To English-speaking visitors Sweden has a mellow learning curve, and the festival’s schedule for 2016 read more like an amplified concert series, with events scheduled in and around Stockholm’s most walkable areas. (You can easily thread other cultural doings into your daily schedule-a walk through the admission-free permanent collection of Moderna Museet, with landmarks like Rauschenberg’s “Monogram,” or Fotografiska, currently hosting a sweeping retrospective of Anton Corbijn’s rock photography.) The rooms were diverse though consistently pleasant, all with good sound. I took in concerts in two spaces redolent of fine university theaters at the Kulturhuset, and in an excellent large club housed in the venue Debaser Medis. There were cellar-style clubs below the S:ta Clara Bierhaus, a homey restaurant and tavern, and Plugged Records, a smartly curated vinyl and CD store and distributor that persists as if iTunes and Spotify never happened. There was also Restaurang Louis, a jazz supper club located next to a movie theater in a shopping complex, and Fasching, the area jazz capital and destination for A-list touring acts. (Very A-list: The coming weeks brought the Charles Lloyd Quartet, Robert Glasper Experiment, Mike Stern/Dave Weckl band and more, and to hear them in this intimate house, which can work simultaneously as a serious listening room and a fun, casual hang, would feel special even for New Yorkers.)

In 2016, the visiting-headliner bookings at Stockholm leaned lower-profile but perhaps more interesting than the usual suspects. A couple of hours after touching down I heard the Malian singer and guitarist Fatoumata Diawara front the Stockholm Art Orchestra, a kind of avant-world house band led by the multireedist Nils Berg. The two-hours-plus performance was marvelous, and almost bizarrely seamless, given the dearth of rehearsal time. (Diawara admitted at one point that she’d only met the band the day prior.) The Orchestra has clearly internalized the canon of groove-centric improvised music-Impulse!, Don Cherry, Fela, Desert Blues-and this allowed them to fall behind Diawara’s original West African songs as if her regular touring band, brewing unshakable vamps below her trance-like arpeggiated chords and strong, sparkling melodies-look up “Alama”-and deploying expert soloists when she wished to stretch the form. For her part Diawara is a passable guitarist but an extraordinary vocalist. Jazz fans might be familiar with her through her collaborations with Roberto Fonseca and her appearance on Herbie Hancock’s Imagine Project, but Diawara’s rightful role is that of a world-music star, a young heiress to Angélique Kidjo and Miriam Makeba.

The day following Diawara’s concert, over the course of an hour, Roscoe Mitchell toured his saxophone arsenal, employing a familiar set of strategies that often relied on his circular-breathing ability. He played long, squonky cyclical figures, like some sort of angry minimalism; impossibly long tones; chirpy, singsong melodic fragments on alto; and willfully tedious overtones that approximated a PA feeding back. His partner in this unapologetically free music was the Japanese percussionist Kikanju Baku, an explosive contrast to Mitchell in onstage temperament, wearing a traditional kasa (hat) and covering his face in a bandana. Baku was a marvel of barely contained hyperkinetic energy, whose movements around the onstage setup, like the loose, anxious bobbing that opens a boxing match, brought an element of dance, evoking Cecil Taylor’s hookup with Min Tanaka. Behind the kit he was even more exciting, piling concentrated breakbeat-like rhythms and extreme-metal technique onto the branch of free-jazz drumming that feels like a sustained eruption and trails back to Sunny Murray.

Cyrille Aimée impressed as a singer with a surefooted concept as a bandleader, part vocal-jazz tradition and part Gypsy-jazz, with ample focus on her delightfully complementary guitarists, Adrien Moignard and Michael Valeanu. The quintet led by drummer Steve Gadd evinced the precision, control and professionalism you’d expect from an assemblage of session aces. The set list paralleled the personnel, without coming off as dry or dated; it brought to mind the era of flush record and production companies employing musicians equally fluent in jazz, rock, R&B and roots music. Within the program were two Keith Jarrett compositions, including a gorgeous balladic treatment of “Country”; standout tunes by L.A.-based keyboardist Larry Goldings (replaced by Kevin Hays here) and guitarist Michael Landau; and the ensemble creation “Green Foam,” a smart, stealthy groover suggestive of “Green Onions.” Aiding the lived-in ensemble vibe were the soloists’ knack for narrative and concision: There were plenty of spotlights, but very few seemed to last even a few bars longer than they should have.

As for the Swedes, the range of aesthetics ran deep and wide, though the quality of the music was uniformly high. This isn’t surprising-jazz has existed, even thrived, in the country for nearly as long as the music has been present in Europe. Aside from Stenson, I was most looking forward to hearing any veterans of Sweden’s heady midcentury postbop scene, and I did, in groups led by the trumpeter Jan Allan and the tenorman Bernt Rosengren. These were wonderfully low-stakes swinging sets-heavy on the standards, the themes played with relish and the solos formed around the underpinnings heard in your favorite Prestige and Pacific LPs. Carrying their torch of stout modern-mainstream jazz was the youngish trio LSD-a wry play on the musicians’ names-who offered a mini-set to industry folks. Saxophonist Fredrik Lindborg’s ax was autographed by Sonny Rollins, as if the music, including “Solitude,” and broken-in strolling-trio format weren’t enough of an indicator of influence. The rhythm section of bassist Martin Sjöstedt and drummer Daniel Fredriksson formed a taut pocket for Lindborg’s hearty, singing improvisations on tenor, bass clarinet and baritone. (When he played the lattermost instrument, I couldn’t help but think of Sweden’s Gerry Mulligan, Lars Gullin, if only by default.)

Moving into au courant acoustic jazz, with a looser, more reflexive ensemble rapport, creative song forms and the pop-leaning melody you might connect to a band like James Farm, was saxophonist ?-rjan Hultén’s Orion. The trio led by the Japanese-born, Sweden-based pianist Naoko Sakata, with the lyrical bassist Alfred Lorinius, justifiably mixed high, and drummer Johan Birgenius, was similarly forward-looking but more openly expressive. The group dynamic here was assured yet bordering on free at times, but the set held firmly together on the strength of compositions like “Dreaming Tree,” the title track off a new CD and a dead ringer for the chordal allure Keith Jarrett put to use in his European Quartet. The pianist Mathias Landæus, performing an inspired solo set, used devices or tropes you might quickly associate with modern Scandinavian jazz and art music-atmospheric, score-like melody and harmony; restrained electronica; scattered bop runs; and hip sonic accents, like saturating an acoustic piano sound in grainy distortion. The twist here was that Landæus was performing behind his recent album From the Piano, in which every sound, no matter how beatbox-ish, came about by applying various extended techniques to his 1919 Steinway.

For absolute virtuosity there was the Freedoms Trio, featuring Norway’s Steinar Aadnekvam, on nylon-string guitar, drummer and vocalist Deodato Siquir, from Mozambique, and the Brazilian bassist Rubem Farias. What they did was familiar in its aesthetic-groove-minded world-jazz, with influences from fusion and modernist Brazilian heroes like Egberto Gismonti and Hermeto Pascoal-but rare in the quality of the musicianship. Aadnekvam is an astonishingly gifted fingerstylist who needs to be heard by fans of Ralph Towner, Toninho Horta, Paco de Lucía and the like. Farias, soloing furiously through an octave pedal that gave his leads more guitaristic appeal, brought to mind Richard Bona and Jaco Pastorius. Siquir’s natural polyrhythmic skill made complicated music feel welcoming.

On my first night, Oct. 7, Fasching hosted a double-bill featuring Sons of Kemet, a U.K.-based quartet with an unconventional format-two kit drummers, tuba and the unflagging saxophonist Shabaka Hutchings-and the Jari Haapalainen Trio. The former group was all stamina, desire and hooks, nearly avant-garde in its commitment to undiluted rhythm. The unit led by Haapalainen, a prominent Swedish indie-pop producer and a guitarist for rockers the Bear Quartet, made Downtown trademarks work in distinctive ways. Big, loping hip-hop rhythms jump-cutting to no-wave funk; rollicking unison themes into free blowing; pretty pop-like melodies sharing set time with all-out skronk from saxophonist Per Texas Johansson: This was nervy, nervous music, boasting the hard-angled shifts in attitude that might best be called Zorn-ian. Haapalainen, here on drums, serviced the mercurial nature of the short tunes without being overly fussy, and Daniel Bingert, like Erik Fratzke in Happy Apple, reminded you of how effective the electric bass can be outside of its expected functions. His chordal playing could summon up the warm and lovely feeling of the Fender Rhodes, and as a frontline player he delivered with the rumbling authority indicative of bari sax. Most impressive on this night, or at least most striking, was the crowd-basically a lot of zealous young people enjoying themselves. The workweek had wrapped and a stellar festival was just beginning.

The 2022 Newport Jazz Festival’s three days of sunshine were bracketed, more or less, by a pair of all-star ensemble jams that included Christian McBride. … END_OF_DOCUMENT_TOKEN_TO_BE_REPLACED

In its first full edition since the onset of the pandemic, and with a new director of programming, the Festival International de Jazz de Montréal … END_OF_DOCUMENT_TOKEN_TO_BE_REPLACED

Among the many physical, spiritual, and institutional losses related to the still-ongoing pandemic is that of Los Angeles’ renowned Playboy Jazz Festival (PJF) at the … END_OF_DOCUMENT_TOKEN_TO_BE_REPLACED

It’s difficult to imagine what the stage and the audience would have looked like at Gaillard Center in Charleston, South Carolina, if Rhiannon Giddens’ new … END_OF_DOCUMENT_TOKEN_TO_BE_REPLACED