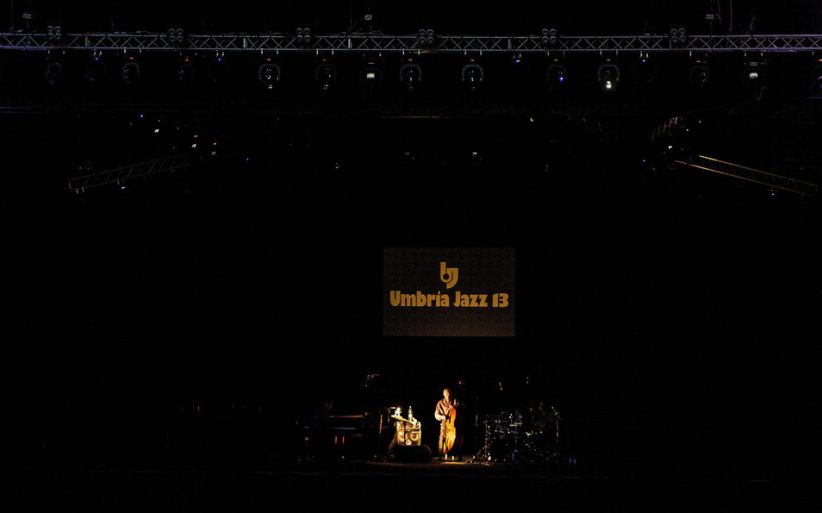 Ordinarily it would not make sense to talk about an atmosphere of tension in the context of a crowd of 4,000 people, in an open-air arena at a jazz festival. But I was there, on Sunday, July 7, 2013, in Arena Santa Giuliana at the Umbria Jazz Festival in Perugia, Italy. There was an unmistakable feeling of nervous anticipation in the air. As people found their seats shortly before nine o’clock, the quietude was eerie. The Keith Jarrett Trio was about to take the stage.

Exactly six years earlier, at the 2007 edition of the Umbria Festival, Jarrett had perpetrated, if not the ugliest, then certainly the most famous public meltdown in jazz history. When he came on stage and saw some people down front taking photographs, he went to the microphone and began to curse “all these assholes with cameras.” His rant and his threats went viral on YouTube: “Turn them fucking off right now. If we see any more [camera] lights I reserve the right-and I think the privilege is yours to hear us-but I reserve the right … to stop playing and leave the goddamn city.”

Carlo Pagnotta, who founded the Umbria Festival and has been its Artistic Director for 40 years, said at the time, “As an artist Jarrett is sublime, but as a person he leaves much to be desired. People came from far away and spent a lot of money to see him and did not deserve to be treated like that …We have decided that his music will no longer be heard at Umbria Jazz, but Jarrett remains part of the festival’s history.”

It came as a great surprise when, as part of the initial publicity for the Umbria Festival’s 40th Anniversary in 2013, it was announced that the program would include the Keith Jarrett Trio in Arena Santa Giuliana.

On Sunday night, the arena, which holds over 5,000 for music, appeared about 75 percent full. Chairs had not been set up on the outer sides of the front section, leaving open spaces. Seats there were 120 Euros. But the two sections farther back, where seats were 75 and 35 Euros, appeared close to full capacity. Pagnotta, who almost never serves as the announcer at Umbria Jazz concerts, came out on stage. Speaking of course in Italian, he pleaded with the crowd to put their cameras away and take no photos during the concert. He also asked them to greet Jarrett’s trio with a standing ovation of welcome. Pagnotta stood aside, the trio appeared, and 4,000 people dutifully stood and applauded. It was one of many odd moments in a very odd evening. The applause sounded cautious, even a little uncertain. I heard no whistles or whoops. Jarrett immediately went to the microphone and said, “See you later,” and, along with Gary Peacock and Jack DeJohnette, walked off the stage.

I was unclear what had just happened. Sitting in the second section, I thought perhaps Jarrett simply meant, “I’ll be back in a moment.” But apparently, when he first walked on stage, he saw someone down front taking a photo. I saw no flashes. But Jarrett’s phobia includes all photography, not just flash photography. Stephen Cloud, Jarrett’s longtime manager, then came on stage and issued a brief, clear, polite entreaty “to those of you who speak English.” He reiterated Pagnotta’s plea for no photography because it is “distracting to the artists.” He asked for the crowd to be respectful of the artists’ wishes.

The trio reappeared on stage and assumed their places. Either right before or right after he sat down at the piano, Jarrett called out, “Zero lights!” The stage went dark. The only light that remained was a small one on the music stand of Gary Peacock, who was positioned between Jarrett and DeJohnette. A light on a music stand was the only stage illumination for an audience of 4,000 as night descended.

They began to play “On Green Dolphin Street.” The audience seemed primarily puzzled, myself included. What was going on? Was there a technical problem? Clearly there was no power failure, because the two huge video screens on either side of the stage were brightly lit with the Umbria Jazz logo. (In the arena, for those in the second and third sections, concerts are watched mostly on the video screens. Obviously there could be no video with the stage in darkness. There would have been no video in any case. Jarrett would not have allowed professional festival videographers, who shot every other artist who performed in the arena during the festival, anywhere near him.) Keith Jarrett had found a way to keep people from taking pictures.

After the first tune the audience applauded, quietly. Darkness had now fallen and Jarrett and DeJohnette were invisible. Peacock’s bass was perceptible; Peacock less so. The second tune was a slow ballad version of “Yesterdays.” “This is sort of like radio,” someone nearby offered. I began to fear that some people in the crowd might revolt and demand stage lights, or even begin shouting insults at Jarrett, as in 2007. It didn’t happen. Enzo Capua, the U.S. representative for the Umbria organization, was seated near me. I heard him say, “This is the quietest large Italian crowd I have ever seen. I think maybe I am in Denmark.”

When the trio came out for the second set, stage lights came on, but dimly. The stage illumination was much fainter than normal, but at least now the performers could be seen, as if through a glass darkly.

The trio’s music on this night was impeccably played but mechanical. There was a blues in the first set that was as perfunctory and devoid of committed ideas as anything I have ever heard Jarrett play. He sounded like he was on autopilot. Of course Jarrett, even on autopilot, can sometimes make you sit very still in your chair. He is such a masterful pianist that, on a bad night, he can offer up sophisticated, multi-layered interpretations of songs like “In Your Own Sweet Way” and “Things Ain’t What They Used to Be.” Personally, I cannot hear him play “Bye Bye Blackbird” too many times. There was a brief magical moment when he played a distilled version of “Answer Me,” just the melody, softly and slowly and achingly.

At the end of the second set the band stood up and took a quick bow to subdued applause. Before he walked off the stage Jarrett took up what appeared to be a black stage towel and waved it at the audience like a bullfighter with a black muleta. Of course, there was no encore. The lights came on over the arena, the huge stage curtain came down, and the crowd filed out, in near silence.

A word about the person or persons in the crowd who took photos: The problem would seem to be associated with those in the very front rows, or anyone who used a flash. I never saw a flash go off all night. Even Jarrett, with all his mania about photographs, would not see people with cameras far back in the crowd if they did not use a flash. But some person or persons up front had apparently tried to take pictures when Jarrett first came out. Their behavior was unconscionable. After the sincere, classy appeals by Carlo Pagnotta and Stephen Cloud, after what had happened in 2007, anyone who took photographs from a spot Jarrett could see is guilty of sociopathic selfishness. It would have been wonderful to have the surreptitious photographers pilloried for a couple of hours in the Piazza IV Novembre, where the music lovers of Perugia could throw rotten vegetables at them.

But that is fantasy, of course. It would never be possible to capture them. The nature of 4,000-person outdoor crowds is that misbehavior is protected. Assholes, as Jarrett characterized them in 2007, after ruining an evening for everyone, can always simply melt back into the crowd.

But if the behavior of the camera operator or operators was reprehensible, what do you say about a performer who, because of the misdeeds of one or a few people, chooses to punish the other 4,000 people present-people who paid good money to see you, and welcomed you with a standing ovation (despite your own violations of decency in 2007), and who behaved flawlessly all evening? How, because one or a few persons disrespected you, do you choose to disrespect 4,000 innocent others? How do you justify playing half a concert in darkness? How is it possible to describe arrogance and vanity so out of control?

In retrospect, it was naive of Carlo Pagnotta to think he could persuade 4,000 people to behave themselves with 100 percent compliance. Pagnotta achieved 99.99 percent compliance, but that wasn’t good enough for Keith Jarrett. In 2007, Jarrett had said from the Umbria stage, “The privilege is yours to hear us.” Apparently he believes it. His tragedy is that he does not understand why privilege runs both ways. Jazz concerts live on the two-way connection between artists and audience. A jazz artist who turns out the lights breaks the bond.

Jarrett could have had a triumph in Perugia. Pagnotta took the high road and offered a fresh beginning. Jarrett could have made people forget 2007 by making a brief conciliatory remark to Pagnotta and the crowd, playing his ass off for two brightly lit sets, doing three encores, and walking off to a genuine standing ovation, one motivated not by request but by the intensity and authenticity of the bond. Instead he chose to play one whole set in the dark, phoned in his performance, refused to do an encore, and, with a black muleta, flipped the bird at the crowd before leaving.

It was a sad night in Perugia.

A note from photographer Tim Dickeson: “The accompanying photo of the Keith Jarrett Trio was taken (without flash) from the top of the hill that overlooks Arena Santa Giuliana, which I would estimate to be one-quarter mile from the stage. The hill was packed with people standing and sitting, watching the show. As it got progressively darker the absurdity of watching virtually nothing but the light from Gary Peacock’s music stand prompted me to take the picture. At this point it was getting difficult to see the people 20 feet in front of me, so I guessed the chances of a performer being disturbed by my one photo was nil. I waited for the applause between numbers and took the picture. The noise from the people around me tripping over each other was far louder than the sound of my camera’s near-silent shutter.”

The 2022 Newport Jazz Festival’s three days of sunshine were bracketed, more or less, by a pair of all-star ensemble jams that included Christian McBride. … END_OF_DOCUMENT_TOKEN_TO_BE_REPLACED

In its first full edition since the onset of the pandemic, and with a new director of programming, the Festival International de Jazz de Montréal … END_OF_DOCUMENT_TOKEN_TO_BE_REPLACED

Among the many physical, spiritual, and institutional losses related to the still-ongoing pandemic is that of Los Angeles’ renowned Playboy Jazz Festival (PJF) at the … END_OF_DOCUMENT_TOKEN_TO_BE_REPLACED

It’s difficult to imagine what the stage and the audience would have looked like at Gaillard Center in Charleston, South Carolina, if Rhiannon Giddens’ new … END_OF_DOCUMENT_TOKEN_TO_BE_REPLACED