Skip to content
Become a member and get exclusive access to articles, live sessions and more!
Start Your Free Trial
Home > Reviews > Kat Edmonson at Scullers 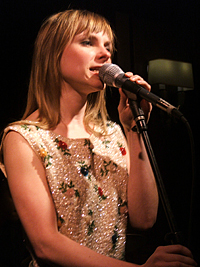 Kat Edmonson tells a story about her American Idol experience. She says she made it as far as Hollywood, but that was the end of the line; the judges said she lacked star power. Man, did they ever get that one wrong.

The tiny Texas-born singer recently brought her evocative style to Scullers Jazz Club in Boston, along with a five-piece band that was anything but just backup. They opened the evening with pianist Kevin Lovejoy’s inventive arrangement of “Summertime,” one of Edmonson’s favorite tracks on her recent CD, Take to the Sky (Convivium).

To get a feel for her style, close your eyes and imagine being in a smoky jazz café during the ’50s, listening to the girlish voice of someone like Blossom Dearie. Add a touch more sophistication and arching, original phrasing and you have a contemporary version of a classic songstress.

Edmonson covered many cabaret standards, all artfully arranged by Lovejoy and accompanied by a muscular band that included Lovejoy’s brother Chris on percussion, John Ellis on sax, J.J. Johnson on drums and Danton Boller on bass. Each classic, from “Just One of Those Things” to “Night and Day,” received an ethereal vocal and instrumental treatment.

Not to be stuck in a Cole Porter rut, Edmonson put a new spin on John Lennon’s “(Just Like) Starting Over.” With just bass and sax behind her, she made Carole King’s “One Fine Day” all her own. And although she claimed that they were still working out the kinks in their version of Dylan’s “Don’t Think Twice, It’s All Right,” the audience’s ovation said otherwise.

Ever since she filled in as a last-minute replacement at the Tanglewood Jazz Festival in early September, Edmonson’s career has taken off. She said she loves being on the road, so if you’re lucky enough to find her in your area, run-don’t walk-to reserve your spot.

“It’s time to imagine a place where we can come together,” Danilo Pérez said from the hallowed stage of Washington, D.C.’s historic Sixth & I … END_OF_DOCUMENT_TOKEN_TO_BE_REPLACED

At the Zeiders American Dream Theater in Virginia Beach, Va., between April 8 and 10, the Vocal Jazz Summit convened in person for the first … END_OF_DOCUMENT_TOKEN_TO_BE_REPLACED

The Big Ears Festival returned to Knoxville in a big way in late March, drawing an estimated 30,000 music enthusiasts from across the U.S. and … END_OF_DOCUMENT_TOKEN_TO_BE_REPLACED

Let’s get this out of the way: The Savannah Music Festival is not a jazz festival. Held over the course of 17 days in late … END_OF_DOCUMENT_TOKEN_TO_BE_REPLACED