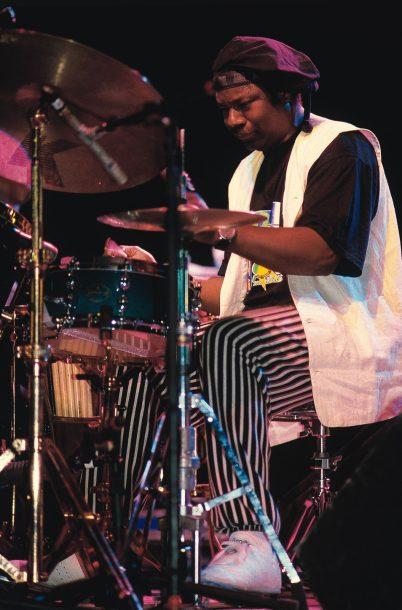 I had “Great Expectations” for this gig. How could any lifelong fusion fan not? Just dig the dream lineup: On drums you had Mike Clark (of Herbie Hancock Headhunters fame) and Lenny White (Return to Forever), on basses it was Victor Bailey (Weather Report) and Stanley Clarke (Return to Forever). The starpower of that dynamic double-rhythm tandem alone was enough to draw a packed house at B.B. King’s Blues Club in the heart of Times Square. Add in guitar hero Robben Ford (Yellowjackets, Miles Davis), trumpeter Eddie Henderson (Herbie’s Mwandishi sextet), alto saxophonist Kenny Garrett (Miles Davis), keyboardist George Colligan and turntablist DJ Logic and you had the makings of what promised to be the concert of the year.

Billed as New Brew, this fusion superband played two sets of “music in the spirit of Bitches Brew” (as the ads read). Indeed, they touched on such familiar early ’70s Miles themes as “Spanish Key,” “Pharoah’s Dance,” “It’s About That Time,” “Directions” and the aforementioned “Great Expectations,” but what the music ultimately lacked was the galvanizing presence and guiding hand of Miles himself. Without that authoritative frontman shaping the music by willfully interjecting new tempos, motifs, harmonies and textures and radically changing up the course in mid-flow, the music remained largely vamp-oriented and seemed uninspired.

White, who had actually played on the August 1969 Bitches Brew sessions, prefaced the set by explaining to the uninitiated in the audience the historical significance of this volatile, open-ended music while adding what a rare thrill it was for him to be playing in such a provocative, risk-taking mode again. What transpired, however, was a set that meandered and failed to coalesce with the kind of fire and focus that Miles’ bands could bring to bear. While Henderson (a last-minute replacement for the advertised Wallace Roney) seemed particularly self-assured in this freer context, responding with some bold and brilliant trumpet work throughout the evening, saxophonist Garrett suffered from some miking problems that prevented him from really digging into this music with the same kind of ferocious abandon that he exhibited a month earlier at the Blue Note in recreating some latter day Coltrane music on the bandstand with drummer Jeff “Tain” Watts. (The addition of a bass clarinet, recreating Bennie Maupin’s subtle but important role on Bitches Brew, would have added a much-needed mysterioso element to the overall vibe).

Guitarist Ford stepped up to the plate a couple of times with some slashing, blues-infected solos (especially effective on a rendition of “Freddie Freeloader”) but seemed to defer to the other frontmen too often. Bailey also provided some sparks on electric bass while Clarke, playing strictly upright, remained in low-end groove mode (at one point quoting the bass lick to P-Funk’s “Knee Deep”), only occasionally breaking loose with one of his patented fleet-fingered solos.

Clearly, New Brew had little or no rehearsal time. And though this Bitches Brewmusic is relatively free-spirited, it does need time to gel on the bandstand. For instance, it took Bobby Previte a year of weekly gigs at the Knitting Factory’s Tap Bar before his Voodoo Down Orchestra began reaching a collective telepathy with their take on Bitches Brew. Similarly, guitarist Henry Kaiser and trumpeter Wadada Leo Smith have forged a potent chemistry over time with their Yo Miles! project by gigging frequently on the West Coast. Bassist Michael Henderson has done the same by going out on the road with his Children on the Corner band, as did guitarist Dave Stryker with his Shades of Miles band and trumpeter Mark Isham with his Silent Way project.

Of course, this was New Breed’s maiden voyage. And unless this was just a one-off gig, I still have “Great Expectations” for them getting it together over time. If they did turn this into a working band, it could develop into something exciting.

“It’s time to imagine a place where we can come together,” Danilo Pérez said from the hallowed stage of Washington, D.C.’s historic Sixth & I … END_OF_DOCUMENT_TOKEN_TO_BE_REPLACED

At the Zeiders American Dream Theater in Virginia Beach, Va., between April 8 and 10, the Vocal Jazz Summit convened in person for the first … END_OF_DOCUMENT_TOKEN_TO_BE_REPLACED

The Big Ears Festival returned to Knoxville in a big way in late March, drawing an estimated 30,000 music enthusiasts from across the U.S. and … END_OF_DOCUMENT_TOKEN_TO_BE_REPLACED

Let’s get this out of the way: The Savannah Music Festival is not a jazz festival. Held over the course of 17 days in late … END_OF_DOCUMENT_TOKEN_TO_BE_REPLACED