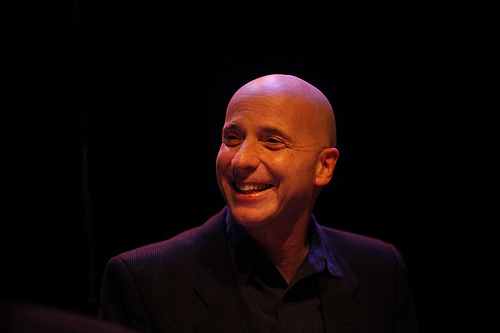 He had sheet music with him and got a little lost on one of the first tunes they played. “How embarrassing,” he said. “But if you can’t get lost in your own tune, whose tune can you get lost in?”

With musicians Joey Baron (drums), Mark Feldman (violin) and Thomas Morgan (bass), this was the best show I’ve seen in months. From the very first song, this quartet had my full attention. They played a tune called “Line-Up.” I’m not going to pretend I knew what was going on. But that’s why I loved it so much. It was an erratic, unpredictable, crazy improvised song. I was excited from the inside-out. My oh-so-busy brain was entirely occupied.

One of the highlights of the evening for me, as I knew it would be, was watching drummer Joey Baron. What’s the secret behind this man’s smile? It never leaves his face. With his shaven head and genuine smile, I feel certain Joey is a Buddhist. Or maybe he was one in a past life. Whatever this man’s beliefs or philosophies, he sure seems happy right down to his core. That energy comes out in the way he plays- even with all his talent, skill and experience, he is excited by every new noise he makes when one of his sticks hits a part of his kit.

I saw Joey play live for the first time at the Jazz Fest this year with Steve Kuhn, who I had the pleasure of interviewing before the show in July. I fell for Joey then and there. For anyone who reads this blog regularly, you’re aware of my fascination with drummers. Joey is one of my favorites, only second to my fiance, and maybe tied with Ari Hoenig. Aside from the fact that Joey is pretty much as good as it gets on drums, this guy exudes a positivity which makes the shows he plays that much more enjoyable. He was even grinning ear-to-ear Friday night when they played “Sad Song.” If nothing else happened in the show but Joey’s solo towards the end, I’d still have gone home very satisfied.

But the entire band put on an amazing show. And they all sound so incredible together. It was great to hear an instrument other than tenor sax that night, and even cooler that that instrument happened to be violin. I used to think there needed to be more jazz trumpet players in town, but I would love to see jazz violin on a more regular basis. Or maybe it was the rarity of the instrument in this kind of music that excited me so.

Two weeks ago, Randy Cole put together a film called Mentorship, featuring John Abercrombie. Along with Chet Doxas, Jim Doxas and John Menegon, Abercrombie talks in this film about the importance of mentorship. There is one really great line in the video when Abercrombie says, “I’m 65 years old. I still have quite a bit of energy when I play, but when I play like musicians like this,” he says referring to the Doxas brothers, “I have more energy. That’s what you do when you’re young, you play with more fire…”

I thought of this line when I saw just how young Abercrombie’s bass player Thomas Morgan is. Morgan is a great bass player who’s probably about 40 years younger than the band leader. Whoever is doing the mentoring here, it’s a combination that really works.

Here’s a video of that night, the band playing “Days of Wine and Roses”.

The 2022 Newport Jazz Festival’s three days of sunshine were bracketed, more or less, by a pair of all-star ensemble jams that included Christian McBride. … END_OF_DOCUMENT_TOKEN_TO_BE_REPLACED

In its first full edition since the onset of the pandemic, and with a new director of programming, the Festival International de Jazz de Montréal … END_OF_DOCUMENT_TOKEN_TO_BE_REPLACED

Among the many physical, spiritual, and institutional losses related to the still-ongoing pandemic is that of Los Angeles’ renowned Playboy Jazz Festival (PJF) at the … END_OF_DOCUMENT_TOKEN_TO_BE_REPLACED

It’s difficult to imagine what the stage and the audience would have looked like at Gaillard Center in Charleston, South Carolina, if Rhiannon Giddens’ new … END_OF_DOCUMENT_TOKEN_TO_BE_REPLACED