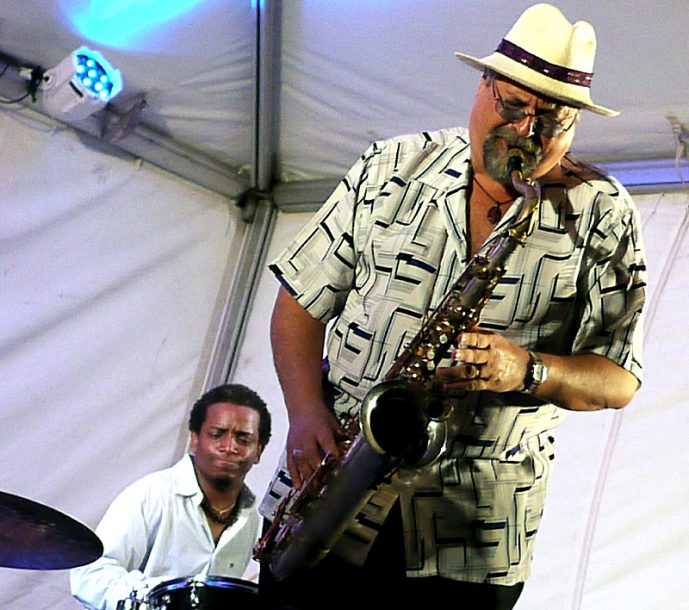 Joe Lovano has a long history of playing with great drummers, gigging early in his career with Mel Lewis and enjoying perhaps his most fruitful musical partnership with Paul Motian, and he is even a drummer himself, but with his quintet Us Five he has upped the ante. In Us Five, Lovano has built himself his dream rhythm section with four creative and hard-driving musicians whose combined energy is clearly pushing Lovano to some of his most inspired playing in years.

In a performance at Washington, D.C.’s Blues Alley, Lovano and group played songs mostly culled from their two albums, Folk Art (2009) and Bird Songs (2010). Lovano’s tone was a bit wobbly in the opening song “Us Five,” but by the second song the band had clicked together as a result of impressive interplay between drummers Francisco Mela and Otis Brown III and bassist Esperanza Spalding. The three have developed a strong sense of each other’s sensibilities during the years they have played together, and along with the subtle and intelligent playing of pianist James Weidman they have become one strong rhythm section.

Yet as the set went on, the strength of the rhythm section became as much a hindrance as a benefit to Lovano. Mela and Brown, each playing a full drumset, were both brimming with ideas, and they appeared to play every single one of them. While the ideas were all tasteful and well developed on their own, in totality it became too much, as the drumming swallowed up the rest of the group. During solos it was evident that Mela and Brown love playing together, and they pushed each other relentlessly. But two full drum kits is an awful lot for such a small group, and since neither drummer took a back seat, Lovano had very little room in which to play. This narrowed his choices, and he was limited in his ability to show the creativity and style for which he is known.

But even within these limitations, Lovano found opportunities to show his signature sound and demonstrate why he finds such pleasure in playing with Us Five. Lovano dug in deep to the few openings left by the drums and turned out rhythmically intricate lines. The band responded to Lovano, challenging him even further. Lovano was at his best in the final number, “Yardbird Suite,” and his sweet tone called forth beautifully the subject of the tribute, Charlie Parker.

Much of the attention that Us Five receives is directed toward Spalding, the It Girl of Jazz; indeed, the audience’s most enthusiastic applause was directed to Spalding and not Lovano. Spalding seemed perfectly content in her role as one of five, positioning herself in the back of the stage and doing nothing to upstage Lovano while locking in tightly with Mela and Brown. But it was clear that the crowd was excited to see the young star, and Lovano was gracious in giving her several extended solos. Spalding played beautifully, offering in her solos a dynamic range that was missing from the rest of the evening.

Lovano clearly loves playing with his partners in Us Five, and it’s not hard to see why. Lovano has at hand an embarrassment of riches, and the quintet is becoming one of the most exciting and promising small groups on the jazz scene. Hopefully the members of the group will settle into each other a bit more and learn to pick their spots instead of nearly always playing to the hilt, but with this much talent on hand it is a pleasure to see them play live.

Among the many physical, spiritual, and institutional losses related to the still-ongoing pandemic is that of Los Angeles’ renowned Playboy Jazz Festival (PJF) at the … END_OF_DOCUMENT_TOKEN_TO_BE_REPLACED

It’s difficult to imagine what the stage and the audience would have looked like at Gaillard Center in Charleston, South Carolina, if Rhiannon Giddens’ new … END_OF_DOCUMENT_TOKEN_TO_BE_REPLACED

“It’s time to imagine a place where we can come together,” Danilo Pérez said from the hallowed stage of Washington, D.C.’s historic Sixth & I … END_OF_DOCUMENT_TOKEN_TO_BE_REPLACED

At the Zeiders American Dream Theater in Virginia Beach, Va., between April 8 and 10, the Vocal Jazz Summit convened in person for the first … END_OF_DOCUMENT_TOKEN_TO_BE_REPLACED