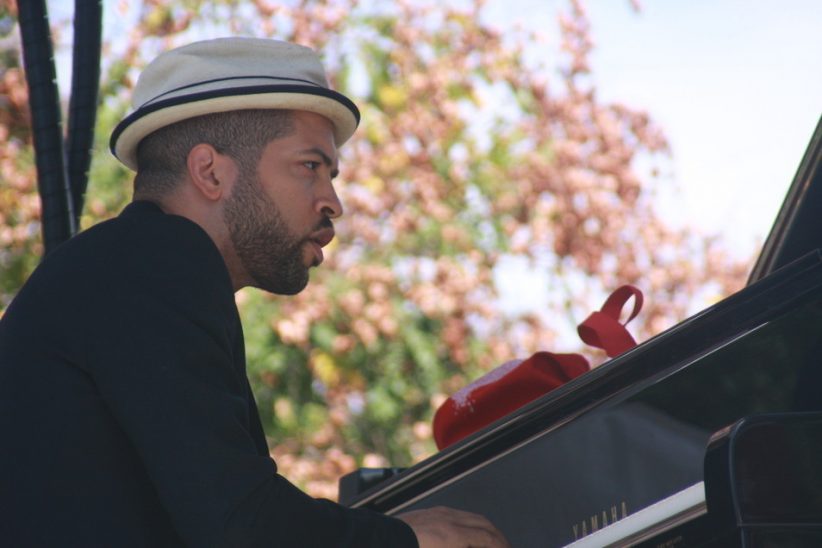 Recordings and concerts honoring a certain revered jazz titan have been so ubiquitous that pianist Kenny Werner once told me he “used to joke that you could not get your union card unless you did a tribute to Thelonious Monk.” Yet even in a world chockablock with Monk tributes of varying merit, it’s worth rejoicing over Jason Moran’s refreshing multimedia work In My Mind: Monk at Town Hall 1959, performed most recently in Boston on February 2, at New England Conservatory’s Jordan Hall.

The work, commissioned by Duke University, the San Francisco Jazz Festival, the Chicago Symphony Center and the Washington Performing Arts Society, got its start five years ago when Moran was asked to help celebrate Monk’s 90th birthday year by recreating the famous 1959 concert documented on the live album Monk at Town Hall. A passionate Monk admirer since an epiphany-inspiring incident in his early teens, Moran was nonetheless leery of a straightforward recreation of the original concert. He proposed using video and recorded conversations to examine the making of Monk’s Town Hall concert, and performing that historical exploration alongside the music itself. The result was In My Mind, which, Moran writes in the program notes, “allows me to ruminate on African-American slavery, jazz history, the piano, my life, religion and redemption.”

It was performed at Jordan Hall by an ensemble identified as Jason Moran and the Big Bandwagon (my italics), consisting of Moran and his longtime Bandwagon associates-bassist Tarus Mateen and drummer Nasheet Waits-augmented by a horn section (Andrew Halchak, alto sax; Carlos Fernandez, tenor sax; Kai Sandoval, trumpet; Jonathan Kenney, trombone; Cale Israel, bass trombone) culled from one of two student ensembles Moran directs as a part-time NEC professor. The music was the same half-dozen Monk compositions from the Town Hall concert: “Thelonious,” “Friday the 13th,” “Monk’s Mood,” “Off Minor,” “Little Rootie Tootie” and “Crepuscule with Nellie,” plus the brilliant and moving insertion of the hymn “Blessed Assurance” just before intermission.

The performances themselves were impressive. The horns each took at least one solid solo, Mateen kept the arrangements aptly anchored yet fluid, and Waits deftly delivered whatever the music called for, playing fiercely and/or freely in spots, switching to quiet brushwork for “Monk’s Mood.” Moran, dressed in a dark suit, strolled onstage alone to start the performance and put on a pair of headphones. His playing only rarely imitated Monk’s: a snippet of stride-like piano here, a tinkly tone cluster to end a piece there, and of course the Monk pieces’ familiar melodies. Mostly he went his own way, strategically dropping in chords to guide the proceedings, with occasional flurries of notes calling to mind Cecil Taylor more than Monk, most notably during a flash of pyrotechnics in “Off Minor.” “Crepuscule with Nellie,” in particular, sounded similar to the version on Moran’s superb recent album Ten, but with the added horns.

For all that good music, though, it was the visuals and supplemental audio that made the performance stand out. It started before Moran even came out onstage, with a projected image resembling a ’50s television screen showing the first of the many images assembled by video artist David Dempewolf to accompany the music. “Friday the 13th,” for example, ran through a handful of alternating images of Monk, among them a famous cropped shot of Monk in profile with cigarette and hat, taken by W. Eugene Smith during the Town Hall concert rehearsal. “Monk’s Mood” contained a written account of Moran discovering Monk via his parents playing “‘Round Midnight” to mourn the death of a family friend in an airplane crash. The pale yellow Dempewolf chosen for the typeface for this segment, alas, was nearly impossible to read over the imagery flowing beneath it. The colors chosen to spell out the audio that went with the other pieces were more visible. A good thing, too, since it helped make the illuminating and often humorous dialogue between Monk and arranger Hall Overton more intelligible.

Then there were the two marches. The first ended “Blessed Assurance,” which had accompanied an account of Monk’s life, with information concerning his slave ancestors and a harrowing story of Monk having his hands beaten by police as he gripped the steering wheel and refused to exit a car belonging to his patroness and friend, Baroness Nica de Koenigswarter. The brass instruments rose as they played the song’s refrain (“This is my story, this is my song”), the other musicians having left the stage, and then the three of them walked offstage single file, still playing, the dirge-like repetition of the refrain audible a time or two more even after they were out of sight.

The second march, which concluded “Crepuscule with Nellie,” was the first one’s opposite. Where the first mourned Monk’s struggles as an African-American, this one celebrated his life and art. Moran, Mateen and Waits gently rang bells as they led the horns offstage and through the audience, Moran pausing as they passed the first row to smile and greet fellow NEC professor Ran Blake, then turning and leading the ensemble up the aisle and out the door, the horns still joyously sounding, onto Gainsborough Street and into the night.

The 2022 Newport Jazz Festival’s three days of sunshine were bracketed, more or less, by a pair of all-star ensemble jams that included Christian McBride. … END_OF_DOCUMENT_TOKEN_TO_BE_REPLACED

In its first full edition since the onset of the pandemic, and with a new director of programming, the Festival International de Jazz de Montréal … END_OF_DOCUMENT_TOKEN_TO_BE_REPLACED

Among the many physical, spiritual, and institutional losses related to the still-ongoing pandemic is that of Los Angeles’ renowned Playboy Jazz Festival (PJF) at the … END_OF_DOCUMENT_TOKEN_TO_BE_REPLACED

It’s difficult to imagine what the stage and the audience would have looked like at Gaillard Center in Charleston, South Carolina, if Rhiannon Giddens’ new … END_OF_DOCUMENT_TOKEN_TO_BE_REPLACED