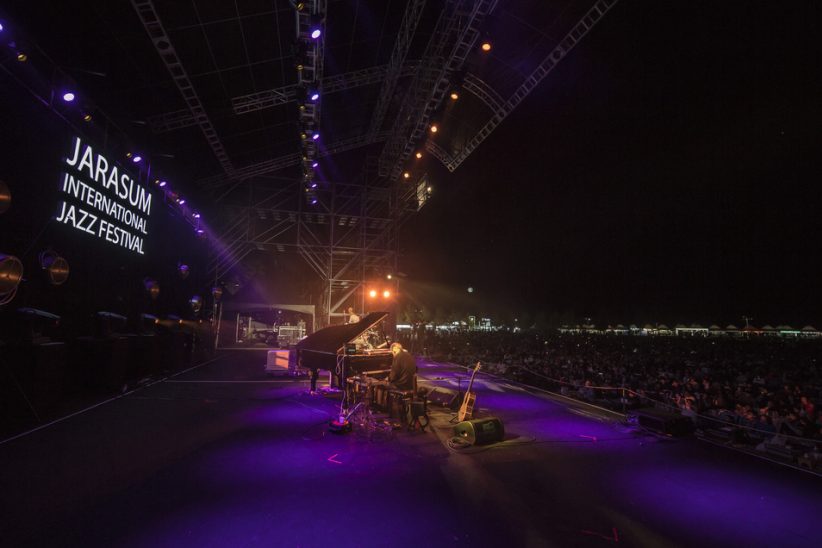 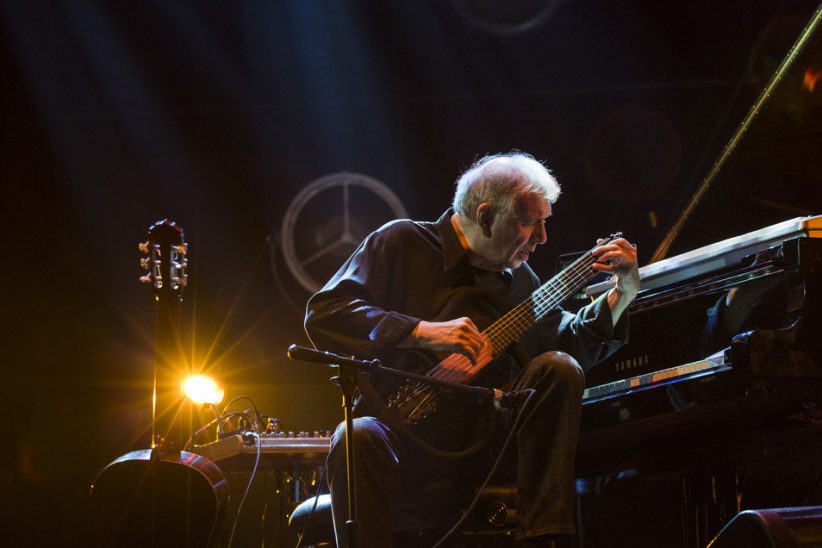 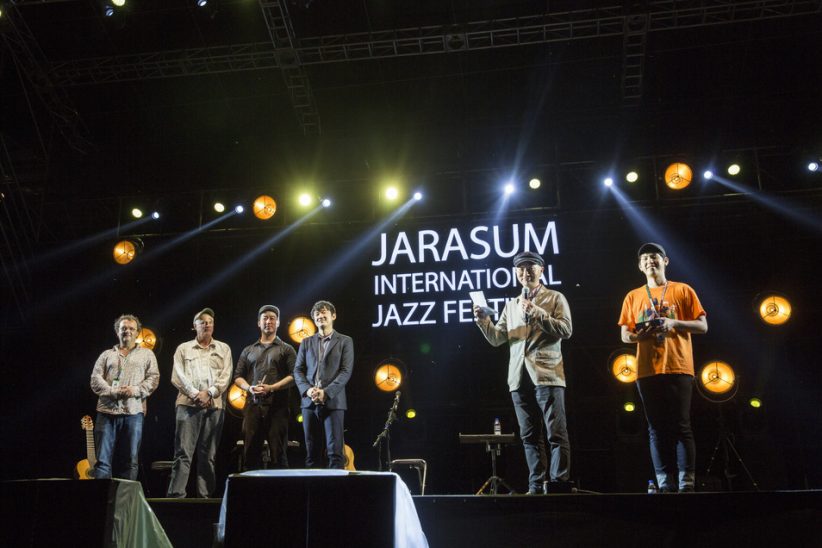 The Jazz Concours competition at the Jarasum International Jazz Festival 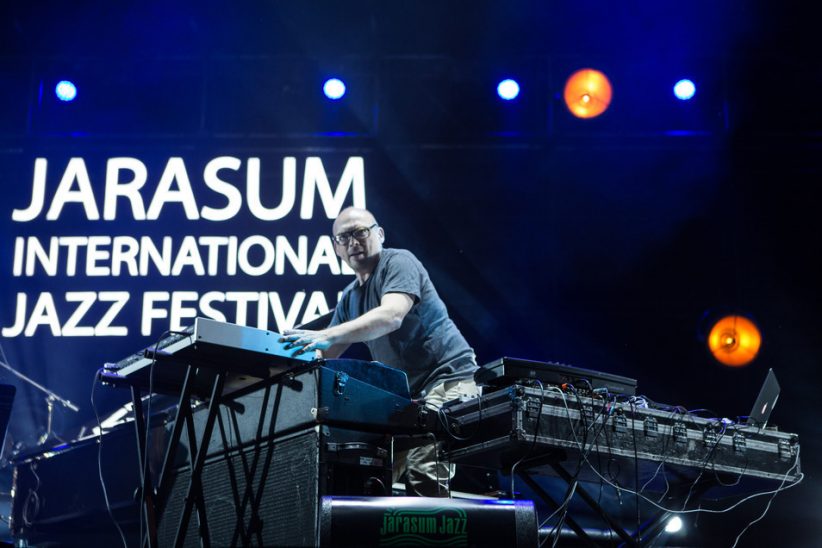 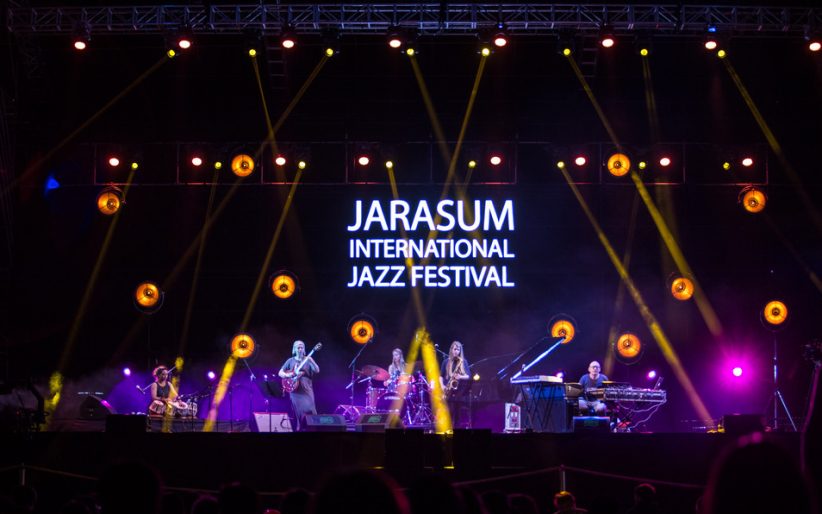 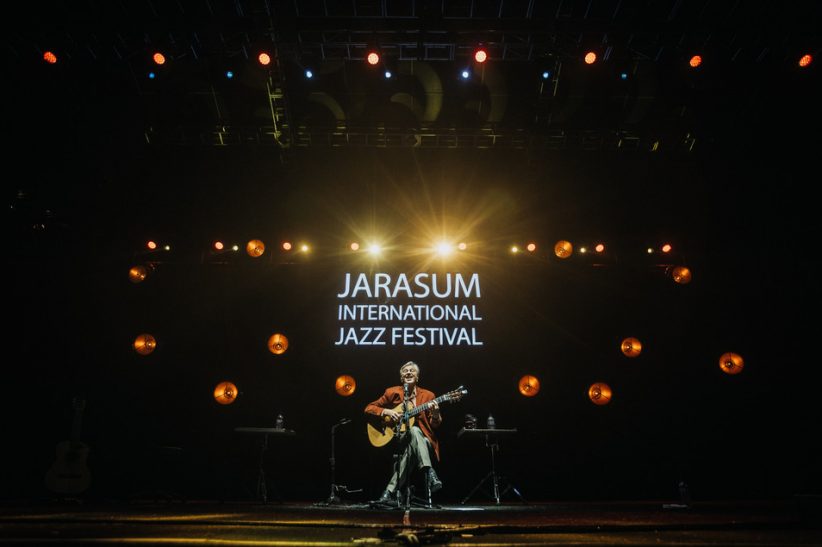 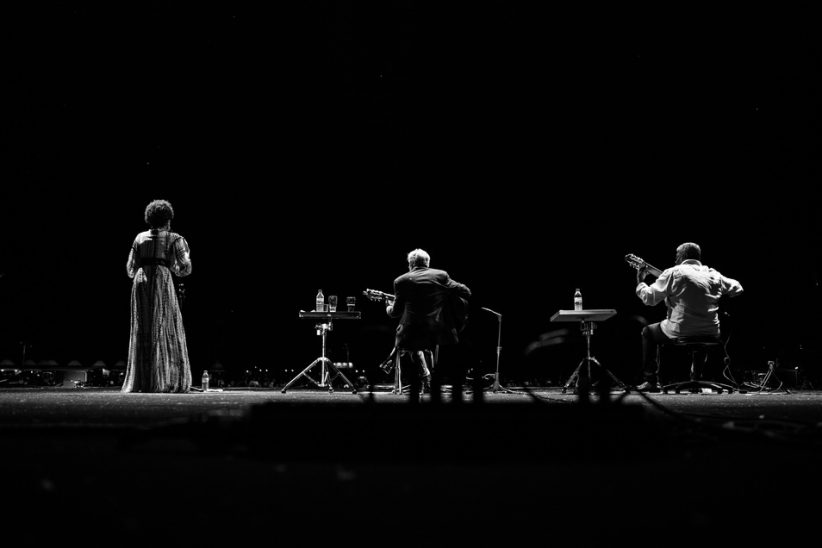 Korea has become known for exporting not only consumer products of all kinds (e.g. Samsung, Kia, Hyundai, et al.), but also the musical sensation of K-pop, whose artists sell millions worldwide. However, most Americans might be surprised to learn that the country has also produced a large number of professional jazz musicians on the U.S. scene and has established a respectable jazz scene of its own-from numerous jazz clubs in Seoul to a glossy magazine (MM Jazz) to at least two major jazz festivals.

I was recently invited to the Jarasum International Jazz Festival, which is like a Korean jazz version of Bonnaroo-a large music festival attended by over 100,000 people and held over three days in a park and campground about 60 km northeast of Seoul, near a small town called Gapyeong. The word Jarasum translates basically to Turtle Island, because the park area is in a valley surrounded by small mountains that are said to resemble a turtle. The park is a popular tourist destination for native Koreans during the non-winter time and features beautiful mountain views and all sorts of water sports. The camping grounds of the park were filled all three days with every kind of tent and camper. They even pitched tents on the same fields where the audience listened to the performances, which took place on 10 different stages, as well as at venues in the nearby town.

The audience was composed almost entirely of younger people, but also included lots of young families, a site not often seen at jazz festivals in the U.S. The festival felt like more like an annual outing for family recreation, much like a 4th of July picnic in America. And, yes, there were fireworks on at least two of the nights, which, given the topography of the site, made for sensational views. I’m guessing that for many, the bucolic camping and picnic experience combined with the fireworks and overall see-and-be-seen vibe made it a worthwhile trip no matter who the headliner was.

My sense was that the audience was not really a jazz audience and wasn’t necessarily there just for the music, though they are very respectful and attentive in a way that American audiences rarely are. No shushing or angry backward looks toward people talking loudly during the music were necessary here. Even the most run of the mill local acts got a quiet and receptive audience, but if they didn’t produce as performers they got that same silent treatment at the end of their set. No polite golf claps. Conversely, when talented performers played with intensity and verve, the audience responded in kind. I had heard from various American jazz artists such as Kenny Barron and John Scofield, who have played the festival in the past, that the size and responsiveness of the audience made for a special experience. “I felt like a rock star there,” Barron told me before my visit.

The music at the festival fell under the wide umbrella of jazz with nary a K-pop artist to be found onstage. Perhaps there were some in the audience like at the Seoul Jazz Festival this past May when Chanyeol from EXO made a very public appearance at a Jamie Cullum set. However, since so many of the young people dressed like K-pop stars, I wouldn’t have known the real thing if I stepped on his or her white-shoe-clad foot. The headliners for this year’s festival included Oregon, Lucky Peterson, Manu Katché, the Spanish Harlem Orchestra, Bugge Wesseltoft and Caetano Veloso. Every year the festival spotlights a country and this year it was France (next year will be Israel) and besides a mainstage appearance by Katché, there were sets from Henri Texier, the Airelle Besson Quartet and La Caravane Passe. Most of the acts, however, were Korea-based and reflected the wide diversity of styles that could be called jazz-from swinging big bands playing standards to more experimental acoustic music to funky neo soul and good old hard-driving postbop.

I enjoyed revisiting the music of Oregon, the seminal chamber jazz group featuring original members Ralph Towner and Paul McCandless, but it’s always a special thrill to see an artist whom I hadn’t seen before and who knocked me out. There were plenty at Jarasum but the one that stuck in my mind and made me go back to my record collection was Bugge Wesseltoft’s New Conception of Jazz, a 5-piece band that harkened back to ’70s electric Miles Davis, while also being very contemporary. Wesseltoft, who played a rack of keyboards like Joe Zawinul back in the day, was joined on-stage by an all-woman band, not that that really matters. I don’t know if it was the tablas played by Sanskritti Shrestha or the McLaughlin-style guitar of Oddrun Lilja Jonsdottir, but I felt transported back to those early Bitches Brew sessions where the electricity propelled the music forward. Wesseltoft’s tunes had that open fluid vibe that many of us can’t help but associate with the early fusion era and it sent me back to listen to his albums.

The Brazilian guitarist and singer Caetano Veloso closed the festival on Monday night with an exquisite acoustic performance that cut through the crisp fall air like a knife through butter. Veloso has been touring with the singer Teresa Cristina and guitarist Carlos Santos and he gave them their own 15-20-minute segment to open his set and later brought them back for his encore. Cristina has a beautiful voice and I expect she’ll become more widely known in the coming years in the North American market. Talent like that is simply too great to overlook. And Veloso’s stripped down presentation of voice and guitar consisted of an effective coda for the thousands of tired festival-goers.

Along with the Korean jazz pianist Ji Young Lee and bassist Kim Changhyun, as well as Denis Le Bas from the Jazz Sous Les Pommiers festival in Normandy, France, I was asked to judge a competition called Jazz Concours, in which four young Korean jazz artists performed 20-minute sets and were rated according to their technical mastery, creativity and presence/showmanship, with the winner receiving cash and a gig on the mainstage at next year’s festival. I enjoyed all four about equally and had a rough time choosing a favorite in all the categories, although in my view they all rated poorly in the showmanship criterion, a common problem among young jazz musicians.

Stage presence aside, the playing was on a high level commensurate with their jazz and music schooling in both Korea and the U.S. (Berklee is a particular favorite of young Koreans). The pianist Kyumin Shim was a student of Jason Moran and it showed in his mastery of a range of styles from stride to bop to post-modernism. I think the winner, saxophonist Sunjae Lee, stood out particularly to the Korean judges in large part because his composition “Breathe” dealt with the plight of the young victims of the ferry accident in 2014, an incident that has been seared into modern Korean culture and is still unresolved today as protests abound about the government’s handling of the tragedy. Lee’s melancholy rendition seemed to have a visceral impact on the audience and both Lee and Kim mentioned how important it is for the country’s jazz artists to have a social or political message to their music.

In addition to attending the festival, I also spent a week in Seoul attending the Performing Arts Market Seoul (like a Korean APAP) and exploring the city’s jazz and music scene. Along with my daughter, who lives in Seoul, and the pianist John Chin and his girlfriend Mara Stepe, we made the rounds of jazz clubs in Seoul, including the funky Club Evans in the uber-youthful Hongdae neighborhood (think a Korean Williamsburg), where we saw an energetic set by the Singapore-based jazz funk group the Steve McQueens, who had also performed at Jarasum. Later in the week we stopped by the Dizzy’s-like All That Jazz in the more Western neighborhood of Itaewon for a performance by my fellow competition judge-the bassist Kim Changhyeon and his trio, heavily influenced by Keith Jarrett’s Standards Trio. On another night, John checked out Once in a Blue Moon in the Gangnam area, while I visited a little hotel club in the Insadong arts district, which featured a young trio of Gi Won Shin (piano), Jae Wan Mun (bass) and Du Yong Song (drums), with cameos from saxophonist Yong Su Kim. We were able to hear live jazz virtually every night and it seemed that each venue featured not only the usual jazz photos and posters, but also shelves of vintage jazz vinyl. Indeed, at those clubs and some others, vinyl listening parties are all the rage.

I came away from the festival, conference and venues in Korea with a sense of the real hunger that’s there for jazz and all its permutations. Jazz may not be as popular as K-pop (what is?), but it’s loved and respected in this country with a strong affinity for serious music. And Jarasum demonstrated to American presenters how jazz can connect with a wider audience.

Among the many physical, spiritual, and institutional losses related to the still-ongoing pandemic is that of Los Angeles’ renowned Playboy Jazz Festival (PJF) at the … END_OF_DOCUMENT_TOKEN_TO_BE_REPLACED

It’s difficult to imagine what the stage and the audience would have looked like at Gaillard Center in Charleston, South Carolina, if Rhiannon Giddens’ new … END_OF_DOCUMENT_TOKEN_TO_BE_REPLACED

“It’s time to imagine a place where we can come together,” Danilo Pérez said from the hallowed stage of Washington, D.C.’s historic Sixth & I … END_OF_DOCUMENT_TOKEN_TO_BE_REPLACED

At the Zeiders American Dream Theater in Virginia Beach, Va., between April 8 and 10, the Vocal Jazz Summit convened in person for the first … END_OF_DOCUMENT_TOKEN_TO_BE_REPLACED