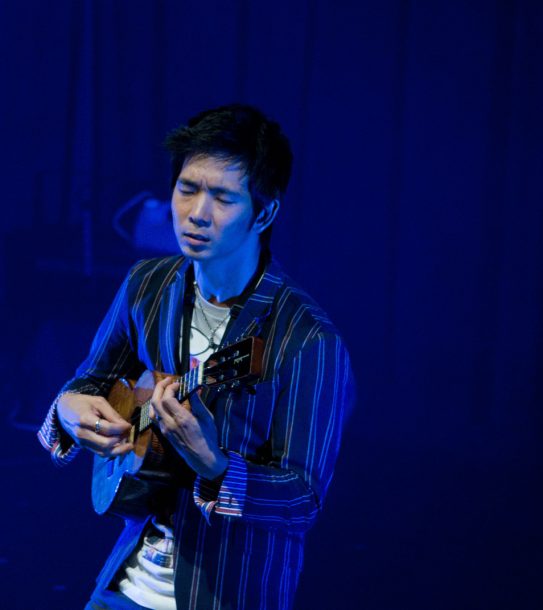 Toward the end of his performance at New York’s Highline Ballroom, Jake Shimabukuro looked out at the sold-out house and commented, “When I was growing up, there was no such thing as a touring solo ukulele player.” Indeed, there was not and, truthfully, there still isn’t-with the exception of Jake Shimabukuro.

Of course, the reason for that is because there has never been a ukulele player like him, one who has integrated elements of multiple genres into his music, whose phenomenal finger work, vast range of textures and tones and endearing persona immediately flip any skeptics within earshot. Shimabukuro is well aware that the ukulele is considered by most a novelty, a toy, a four-string baby guitar-not a real instrument. He knows that audiences associate it with fat guys in Hawaiian shirts and leis playing hula music for tourists, or worse, with the late Arthur Godfrey or Tiny Tim, entertainers who knew their way around a uke but milked it for its comedic value rather than exploring its sonic possibilities.

He is often self-effacing onstage, and fun to watch as he moves limberly around, but Shimabukuro is dead serious about his craft: A viral video of his interpretation of George Harrison’s “While My Guitar Gently Weeps” currently has more than nine million YouTube views. When that many people are watching a ukulele player, something is up.

What’s up is that Jake Shimabukuro falls into that rarest of categories: a musician who has completely and irrevocably reimagined the role of his chosen instrument. To call him virtuosic seems almost an understatement. It becomes apparent immediately when he takes the stage that he possesses a gift. Leading off at the Highline with “143,” the opening tune from his most recent album, Peace, Love, Ukulele, Shimabukuro-who noted that he began playing at age 4 in his native Hawaii-showed no attachment to the traditional method of simply and lazily strumming a basic chord progression in order to simulate native Hawaiian music. Much in the way that Béla Fleck has transformed the banjo, Shimabukuro-who doesn’t so much play jazz as borrow some of its attitudes and attributes-constantly seeks to expand the role of the ukulele. Complex chord structures alternate with blindingly picked lead runs; multi-layered melodies, counter-melodies and intricate harmonies dance around one another; and while it’s all extremely pleasing to the ear, whether a pin-drop ballad or a speedy quasi-bluegrass breakdown, never is it condescending.

Shimabukuro delighted in name-dropping influences as he introduced songs-one tune was inspired by Van Halen, another by Wes Montgomery, a third by the Japanese 13-stringed instrument the koto. His cover material drew from sources as diverse as Leonard Cohen (the soon-to-be-overexposed “Hallelujah,” played tenderly and pristinely), Queen (a magnificently stripped-to-its-essence “Bohemian Rhapsody”) and Journey (the dreaded “Don’t Stop Believing,” which he chose as his encore). This wasn’t so much to rack up hipness points-he gets those just by being Jake Shimabukuro-but because diversity is what he’s all about. His originals-among them “Ukulele 5-0,” written for the TV series Hawaii 5-0, “Go for Broke,” a tribute to “all active military,” and “Five Dollars Unleaded,” a reminiscence of childhood times with his father-each projected different emotional vibes. “Blue Roses Falling,” about losing a loved one, started as an introspective whisper, reached a crescendo, lulled and faded; “Let’s Dance” veered into flamenco territory; and “More Ukulele” (Shimabukuro’s response to the famous Saturday Night Live “More cowbell” skit) found a funky groove and followed it. “Orange World,” inspired by Fleck and the bluegrass classic “Orange Blossom Special,” was as percussive as a drum circle but way more tuneful.

Shimabukuro’s take on the Harrison/Beatles staple closed the pre-encore set and it was a markedly different reading than the famous YouTube clip: More dynamic, further out, less adherent to the song’s original changes, it showed that Jake Shimabukuro is a musician who is still finding his way, transitioning as he grows. Whether he will ever find love in the mainstream is anyone’s guess, and it remains to be seen if others take up the call and take the instrument to other places. But either way, never again will the ukulele be seen as a silly prop. Jake Shimabukuro is making sure of that.

In its first full edition since the onset of the pandemic, and with a new director of programming, the Festival International de Jazz de Montréal … END_OF_DOCUMENT_TOKEN_TO_BE_REPLACED

Among the many physical, spiritual, and institutional losses related to the still-ongoing pandemic is that of Los Angeles’ renowned Playboy Jazz Festival (PJF) at the … END_OF_DOCUMENT_TOKEN_TO_BE_REPLACED

It’s difficult to imagine what the stage and the audience would have looked like at Gaillard Center in Charleston, South Carolina, if Rhiannon Giddens’ new … END_OF_DOCUMENT_TOKEN_TO_BE_REPLACED

“It’s time to imagine a place where we can come together,” Danilo Pérez said from the hallowed stage of Washington, D.C.’s historic Sixth & I … END_OF_DOCUMENT_TOKEN_TO_BE_REPLACED