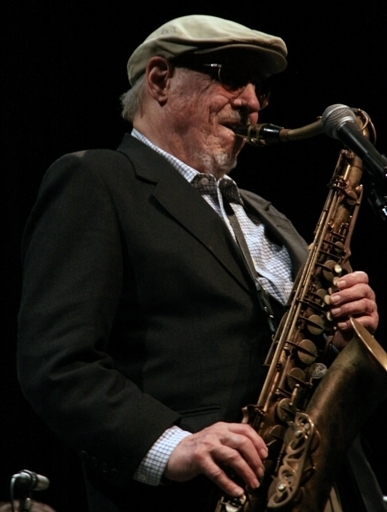 Ira Sullivan is still preaching the gospel of jazz. At age 80, he continues to perform on saxophones, flute, trumpet and flugelhorn, and showcase his younger bandmates. It’s been 50 years since he left Chicago’s bopping jazz scene to settle down in Miami to perform, teach and raise his family.

There were many interesting moments as Sullivan shifted instruments throughout the night, soloing solidly and teaming up with one or both of his horn-mates, longtime collaborator Dante Luciani on trombone and special guest Marc Berner on bass flute. The band also included Jerry Stawski on piano, Vince Evans on bass and James Martin on drums. Sullivan also called the audience essential to the equation. “Your ears are the other half of the music,” he said.

The band was at its strongest on “Bensonality,” a blues that Duke Ellington wrote in tribute to Chicago disc jockey Al Benson. This take featured Sullivan on tenor sax.

In this Valentine’s Day-eve event, Sullivan went thematic, performing “My Funny Valentine” as a two-flute feature with Berner. The contrast in their alto and bass flutes worked well and they were in sync whether playing in unison or comping behind one another. Sullivan shifted to trumpet for “Will You Be Mine?,” which he introduced as “”Will You Still Be Mine, Valentine?”

The leader’s soprano sax work throughout the night was imbued with an interesting Middle Eastern tone. He featured the soprano on the ballad “You Must Believe in Spring,” following it with “Spring Can Really Hang You Up the Most” on soprano and flugelhorn.

The rhythm section was featured on two tunes, “When I Fall in Love” and “Don’t Worry About Me.” Bassist Vince Evans also sang in a Tormé-like style on the latter song. James Martin was a marvel on his minimalist drum kit-a tiny bass drum, one snare, a hi-hat and two ride cymbals (no tom toms or rack of ancillary percussion devices). His touch was sure and full of nuance. He provided ample support-even at a whisper-like level when the moment called for it,

Sullivan began studying trumpet with his father before he was 4 and learned to play saxophone from his mother, because, as he put it, “The saxophonist couldn’t always make the gig.” He eventually added flute to his repertoire. He also threw in a bit of hand percussion on “So In Love” plus vocals on “The Frim Fram Sauce” that was a novelty hit for Nat King Cole.

“Music is one of the greatest gifts that God has given to man,” Sullivan told his audience of more than 400. The evening wound down with a two-flute feature on “Day By Day” from the musical Godspell and closed with the full band exploring Sullivan’s traditional closer, “Amazing Grace.”

The Port Charlotte audience loves Sullivan, given how this was his 11th performance in the series in 20 years. Sullivan will be in the area again March 24 when he performs in a quartet setting for the South County Jazz Club.

“It’s time to imagine a place where we can come together,” Danilo Pérez said from the hallowed stage of Washington, D.C.’s historic Sixth & I … END_OF_DOCUMENT_TOKEN_TO_BE_REPLACED

At the Zeiders American Dream Theater in Virginia Beach, Va., between April 8 and 10, the Vocal Jazz Summit convened in person for the first … END_OF_DOCUMENT_TOKEN_TO_BE_REPLACED

The Big Ears Festival returned to Knoxville in a big way in late March, drawing an estimated 30,000 music enthusiasts from across the U.S. and … END_OF_DOCUMENT_TOKEN_TO_BE_REPLACED

Let’s get this out of the way: The Savannah Music Festival is not a jazz festival. Held over the course of 17 days in late … END_OF_DOCUMENT_TOKEN_TO_BE_REPLACED