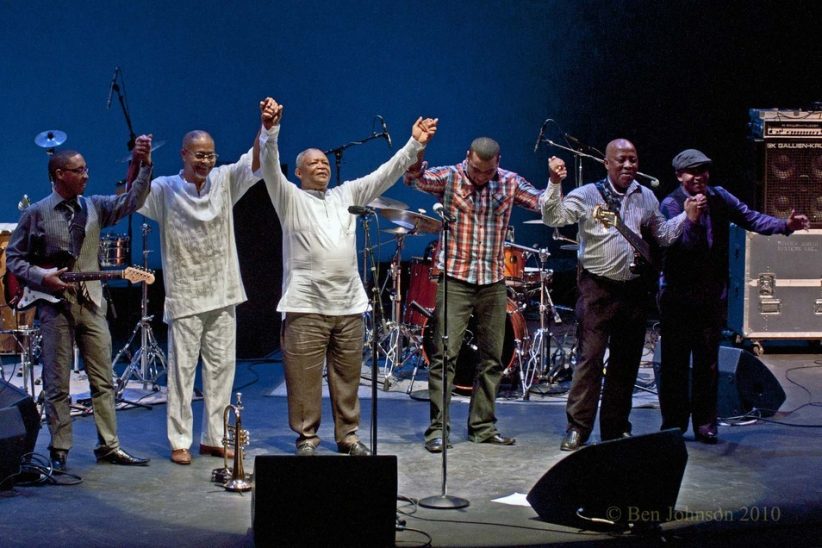 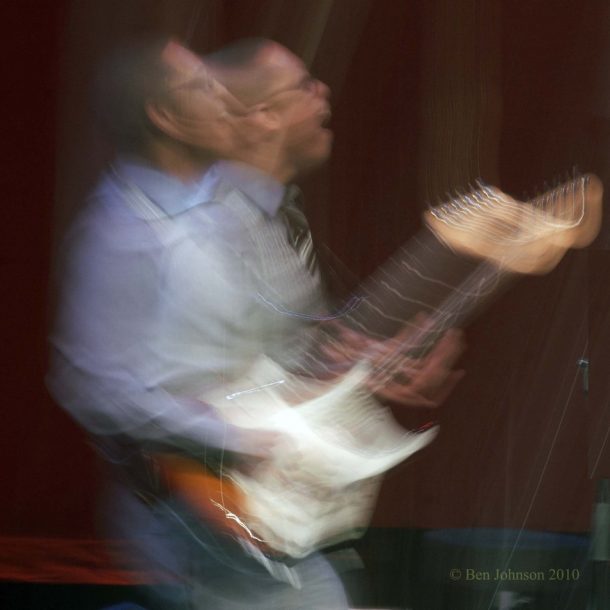 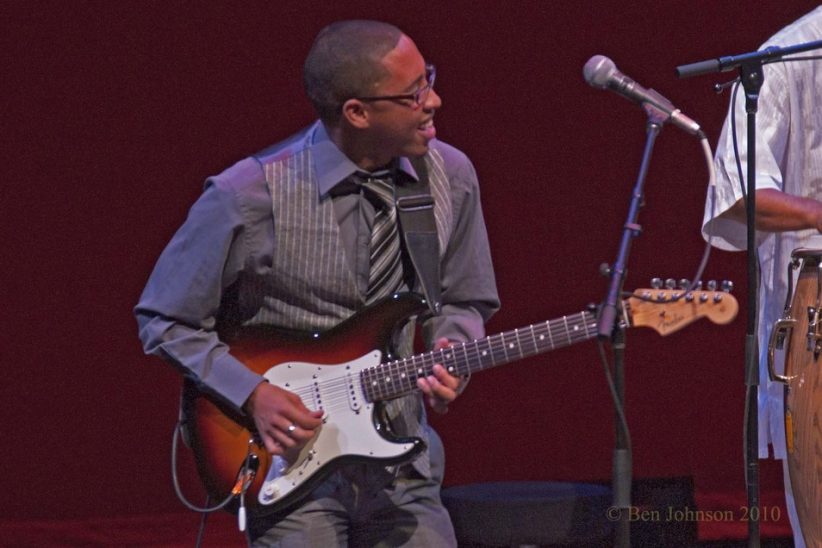 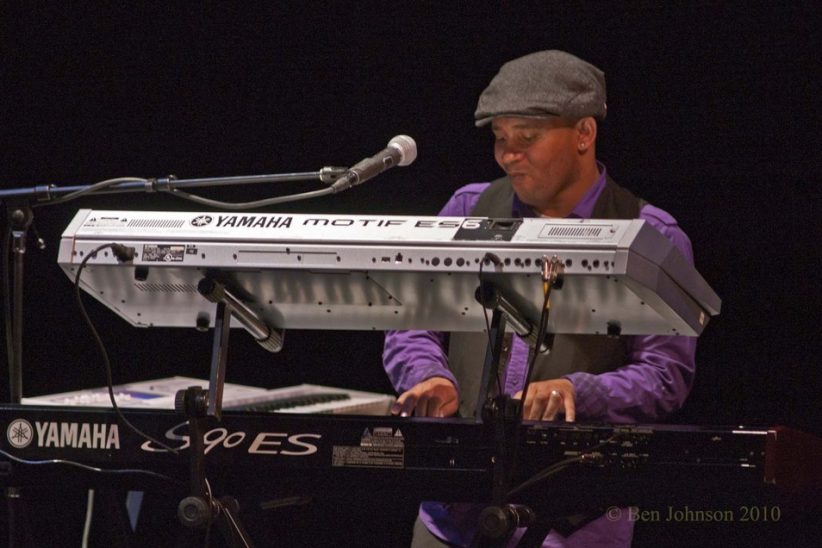 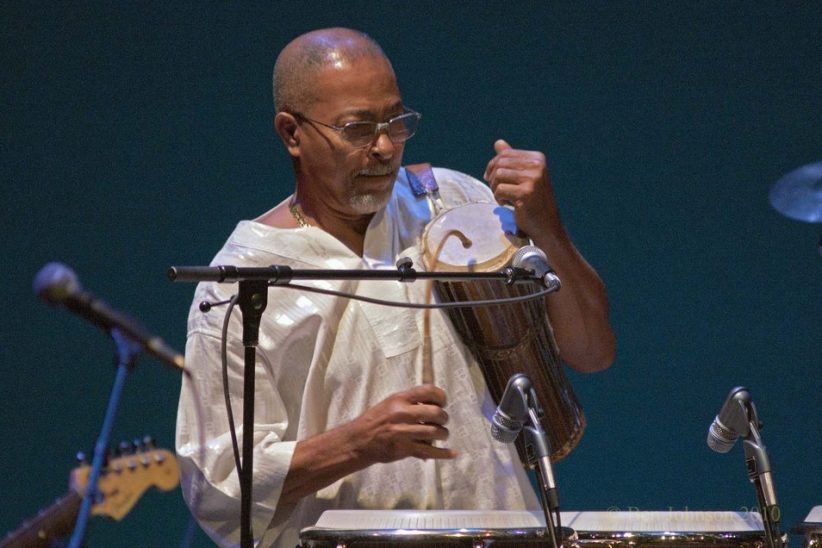 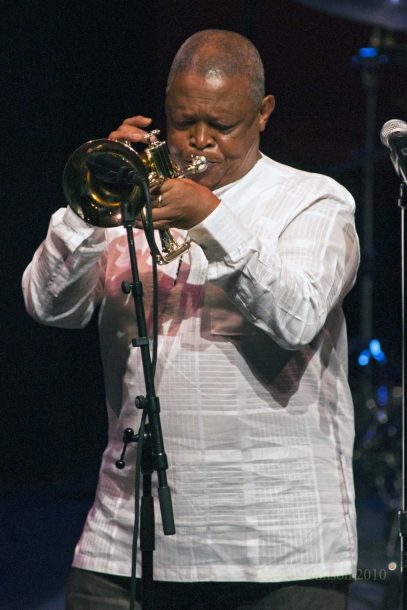 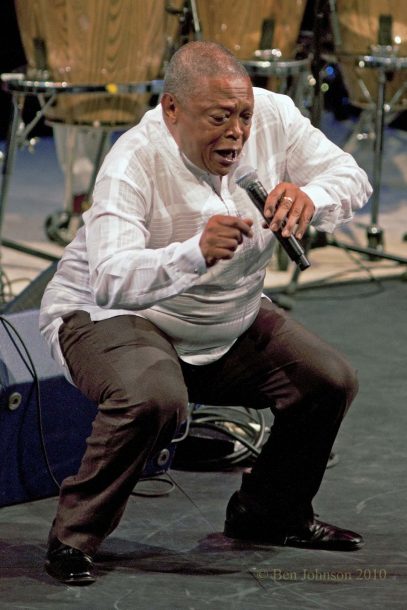 The Zellerbach Theatre, in Philadelphia, PA, presented Grammy award-winning, legendary South African trumpet player Hugh Masekela. The performer, composer, producer and social activist, is best known for his integral role in Paul Simon’s tour behind the classic album Graceland. Also well known for bringing the energy and spirit of his native South Africa to the stage in his Broadway hit musical, Sarafina, Masekela has been making fun, exciting, empowering music for forty years and counting.

A pre-show artist chat took place at 7:00 PM. Hugh Masekela spoke with Carol Muller, Professor of Ethnomusicology at the University of Pennsylvania about South African music and its influence on the evolution of world music.

Two numbers that are no surprise, but always a highlight of a Masekela concert, were “Grazin in the Grass” and “Stimela,” the coal train song.”Stimela” is a tribute to the migrant workers of South Africa and the trains that take them away from their families and towards the dangerous work miles underground by which they must make their living. This song never ceases to send goose bumps down your arms when performed live. The song opens with a spoken introduction, cowbell and train-whistle crescendo, Cameron John Ward on guitar provided a bluesy sound to the opening instrumentations. Masekela’s beautiful flugelhorn solo continued where the guitarist left off. The song escalated until all members of the band were singing

a cappella which left the audience respectfully silent.

The performance of “Lady,” demonstrated the band’s ability to alternate between very soft and subtle passages in the song and interwoven with all-out funky phrasing. In one of Hugh’s most enduring compositions, “The Marketplace”, the band recreates through the music the setting of two lovers in and around a beautiful vegetable market with all its colors.

Masekela sang, played, imitated a train whistle, danced at the front of the stage, and had the audience on their feet throughout the show. He was unstoppable for two and one-half hours!

After the show, we joined Hugh backstage for an informal chat. He was very congenial, and humorous. He shared his thoughts on his music, in that it has always been dedicated to people who have struggled. One comment he shared that I will always remember is that it is incumbent upon everyone of us to refuse to accept injustice!

The Zellerbach Theater is part of the Annenberg Center for the Performing Arts and is located on the University of Pennsylvania Campus in Philadelphia, PA. and has a long history of offering audiences a diverse selection of cultural and artistic offerings. More information on their schedule and mission can be found at their web site.

More images from the show are available at Ben Johnson’s gallery online.

“It’s time to imagine a place where we can come together,” Danilo Pérez said from the hallowed stage of Washington, D.C.’s historic Sixth & I … END_OF_DOCUMENT_TOKEN_TO_BE_REPLACED

At the Zeiders American Dream Theater in Virginia Beach, Va., between April 8 and 10, the Vocal Jazz Summit convened in person for the first … END_OF_DOCUMENT_TOKEN_TO_BE_REPLACED

The Big Ears Festival returned to Knoxville in a big way in late March, drawing an estimated 30,000 music enthusiasts from across the U.S. and … END_OF_DOCUMENT_TOKEN_TO_BE_REPLACED

Let’s get this out of the way: The Savannah Music Festival is not a jazz festival. Held over the course of 17 days in late … END_OF_DOCUMENT_TOKEN_TO_BE_REPLACED