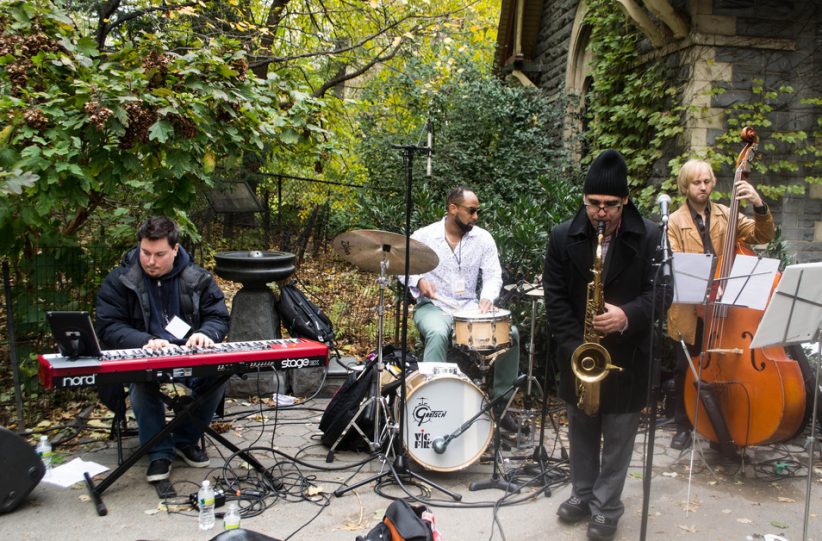 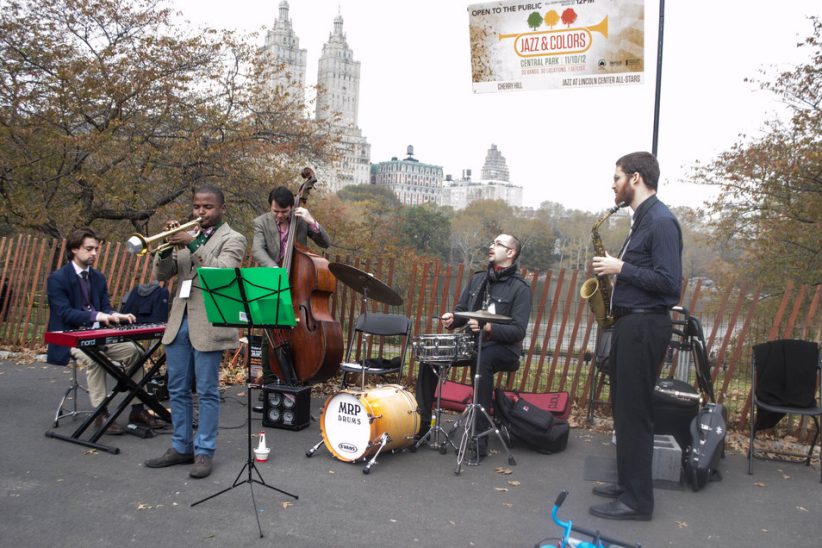 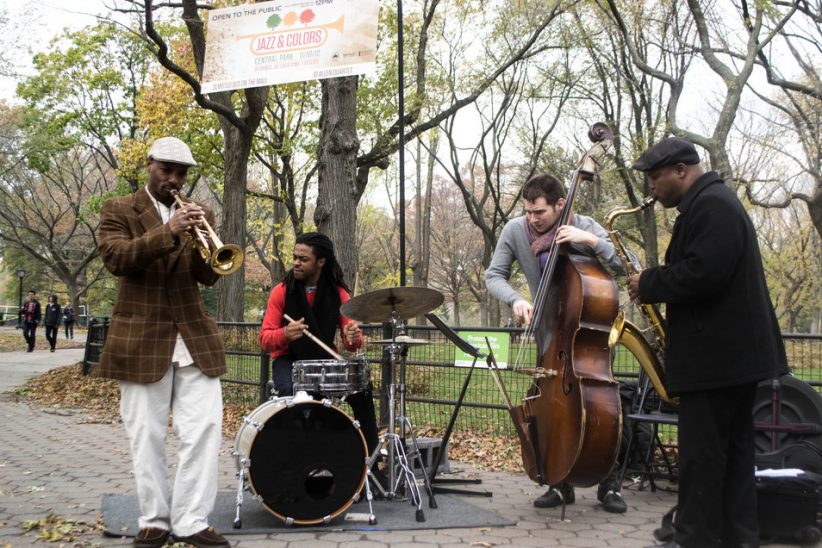 Jeff Tamarkin is working on a longer and more in-depth piece on the recent Jazz and Colors festival for the Jan./Feb. issue, but I was able to catch the second set. EH

Jazz programming’s powers of reinvention are mighty. Festivals designed in the image of rock showcases? Sure. A round-robin series of improvised duets? OK. Festivals on cruises and cargo ships? Why not?

On Saturday afternoon in New York, “Jazz and Colors” upped the ante, overtaking Central Park in a way that suggested a meld of installation and performance art or some smartly conceived protest stunt. Thirty ensembles placed fairly evenly throughout the area performed (ostensibly) two 90-minute sets containing the same tunes in the same order. Armed with maps, parkgoers hiked from spot to spot as if on some sort of busk-crawl-one featuring street musicians who sounded phenomenal and had an uncommon amount of advanced education under their belts. (That passersby would mistake these certified professionals for actual buskers was certainly a risk, even given the prominent signage at each location. I saw someone lift up a saxophonist’s case to drop a dollar in during an intermission set, and the jazz heads in the crowd shuddered.)

Without digging for numbers, the event, presented by entrepreneur Peter Shapiro, NYC Parks and the Central Park Conservancy, appeared to be a hit: a lot of focused listeners, a lot of terrific music, weather that was cooperative if less “colorful” than event producers might have hoped. The master set lists were deftly plucked, comprising mostly warhorse standards about the fall months, New York and Central Park (or any combination of the three).

For me, the event was a reminder of Central Park’s expansiveness. The park’s square-mile-plus of urban wilderness dwarfed the lineup’s magnitude. There wasn’t much (if any) bleed over from group to group, and while the maps were expertly drawn, you had to focus to find the band you were looking for. One set wasn’t enough, and I doubt two were, either. The temptation to move on and hear something else was strong, but you ate up valuable set time walking. The park and its places of interest were also the point.

The music, by fine mid-level talent, often made you want to stay put. (To clarify, “mid-level” applies to stature more than ability. These were some of the finest players going, but you weren’t going to spot Dave Holland or Joe Lovano jamming next to the carousel.) There was JD Allen’s quartet, a fiery and communicative bop combo that made “Body and Soul” sing, and the Mingus Big Band, stellar as usual but done an injustice by concrete-bandshell sound. The outstanding guitarist Doug Wamble veered somewhat from the set list with singer-songwriterly fare. Guitarist Joel Harrison boasted a heavyweight band including trumpeter Steven Bernstein, and they played accessible but inventive arrangements like an “Autumn in New York” recast by the band’s drummer, George Schuller. I hoofed it over toward trumpeter Roy Campbell’s group but they’d just wrapped up. I was out of breath and my knees ached. Maybe exercise was the point, too.

Among the many physical, spiritual, and institutional losses related to the still-ongoing pandemic is that of Los Angeles’ renowned Playboy Jazz Festival (PJF) at the … END_OF_DOCUMENT_TOKEN_TO_BE_REPLACED

It’s difficult to imagine what the stage and the audience would have looked like at Gaillard Center in Charleston, South Carolina, if Rhiannon Giddens’ new … END_OF_DOCUMENT_TOKEN_TO_BE_REPLACED

“It’s time to imagine a place where we can come together,” Danilo Pérez said from the hallowed stage of Washington, D.C.’s historic Sixth & I … END_OF_DOCUMENT_TOKEN_TO_BE_REPLACED

At the Zeiders American Dream Theater in Virginia Beach, Va., between April 8 and 10, the Vocal Jazz Summit convened in person for the first … END_OF_DOCUMENT_TOKEN_TO_BE_REPLACED