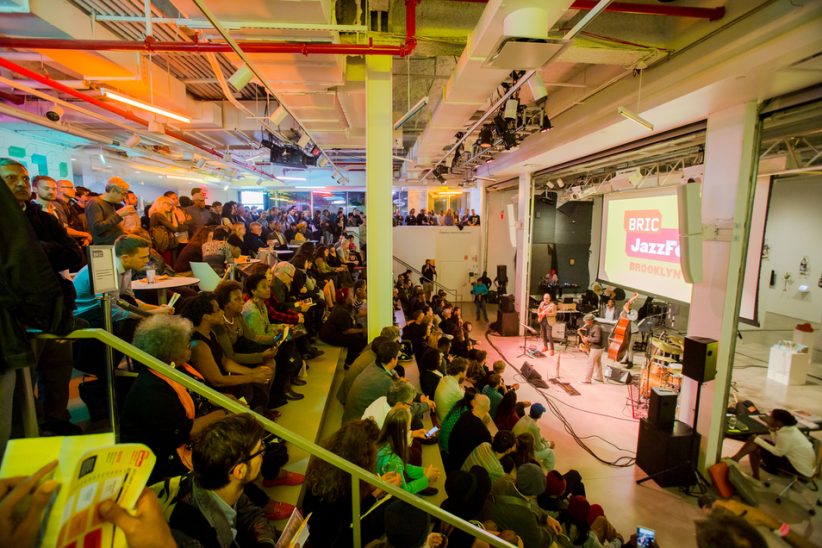 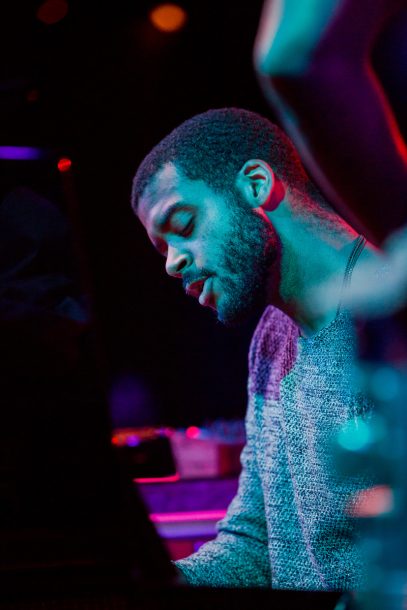 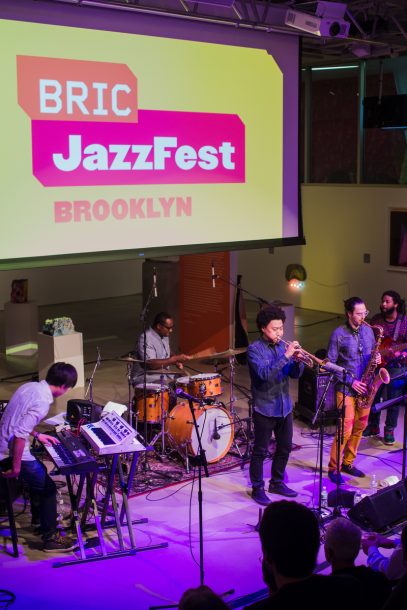 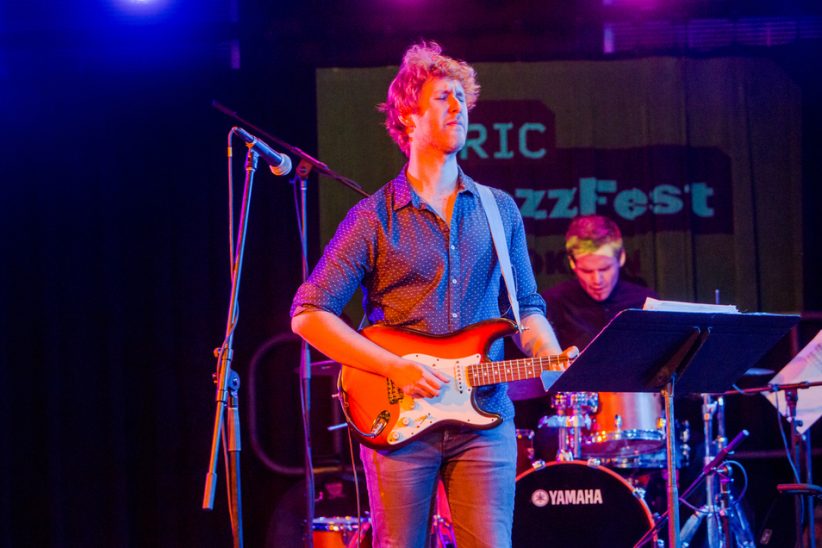 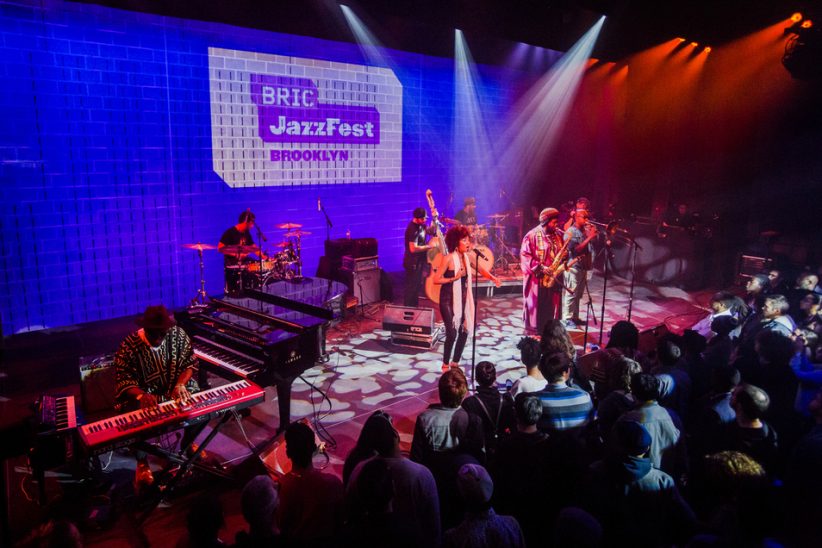 Sometimes in the arts a confluence of venue and event can occur that is so perfect it makes you wonder which came first-the concept of the show or the construction of the space. In the case of the inaugural BRIC JazzFest’s fun and well-wrought two-night marathon, which wrapped on Friday, that seemingly predestined venue is the BRIC House in Brooklyn’s Fort Greene neighborhood. A decades-in-the-making product of BRIC, the organization best known for its public-television efforts and the Celebrate Brooklyn! concert series, the facility opened in the fall of 2013 and features three rooms that should pique any ambitious arts presenter’s sense of possibility: a 400-capacity ballroom, with seated balcony, reminiscent of a fine-sounding rock club; a 75-capacity “Artist Studio” with broadcast-quality sound; and a quarry-like, 3,000-square-foot gallery space with an amphitheater built into one end-not so good for sound but great for atmosphere.

The festival’s curators included two producers from the Celebrate Brooklyn! Festival plus Brice Rosenbloom, of NYC Winter Jazz Fest, and that institution’s footprint was impossible to ignore, particularly during the marathon. (The fest also featured three individual performances beginning on Oct. 11, including those by the Ron Carter Trio and Battle Trance, the new-music saxophone quartet whose name announces its m.o. of deep-focus new-music and technical endurance.)

Nine acts were presented on each night of the marathon, scheduled from 7:30 to midnight, and many if not most of them were WJF veterans who uphold its mission statement: notions of jazz as a thriving, transformative contemporary art form, ideas that might seem like lip service if the music wasn’t still so wildly misunderstood in the general culture. On Thursday, there was saxophonist Donny McCaslin’s 21st-century jazz-rock quartet, offering imposing playing on top of expertly curated retro electronic sounds that gave the enterprise a kind of pop appeal. During roughly the same time slot, harpist Brandee Younger impressed with studied technique and admirable self-awareness; she understood the strange magnitude her ax holds on top of or apart from her quartet (a solo arrangement of Stevie Wonder’s “If It’s Magic” was especially affecting), while also realizing how engaging its timbre can be when deployed as a harmony instrument-at once otherworldly and reminiscent of post-Gary Burton vibraphone strategies.

Two acts on night one stretched the parameters of “jazz” programming with varying degrees of success. The acoustic piano trio Dawn of Midi impersonated the minute revelations of electronic minimalism with a conviction to fool the blindfolded, but L.A.-based Dessy Di Lauro’s Neo-Ragtime was a head-scratching booking, a cloying catch-all of a band whose combination of earnestness and theatrical schmaltz made it a sore thumb among so many smart, centered jazz acts.

Other aesthetic one-offs included Thumbscrew, the lone true-blue avant-garde outfit, featuring the sonically mischievous guitarist Mary Halvorson with bassist Michael Formanek and drummer Tomas Fujiwara. At its most engaging, Thumbscrew’s music works into a tumbling, headlong kind of swing akin to freebop. And Deva Mahal, the daughter of blues eminence Taj Mahal, touted a slippery but stout voice that needs a showcase gig with a guest list of neo-soul-hungry label heads.

A few bands working inside older jazz and R&B traditions were refreshing, given the forward-looking but perhaps overly calculated thrust of much else here. Michael Blake’s quartet featured leader-caliber personnel in bassist Ben Allison, drummer Ben Perowsky and Frank Kimbrough (a sterling pianist who deserved a proper grand, not the upright the Artist Studio space was equipped with). The band played material from Blake’s most recent album, Tiddy Boom (Sunnyside), homing in on stylistic pockets of jazz history with studious precision but also plenty of actual blues feeling. “Hawk’s Last Rumba” showcased Blake as post-swing, pre-bop tenorman, applying vibrato to a gorgeous melody with doubtless taste, while the rolling swing and planed phrasing of “Coastline” yearned for Hermosa Beach in the 1950s.

James Carter’s Organ Trio blasted a timeworn tradition into postmodern territory via breakbeats and the leader’s instrument-crushing, altissimo-saturated playing, which is so unapologetically virtuosic it makes Earl Bostic sound like Warne Marsh. On groove workouts like Bill Withers’ “Use Me,” the band looked and felt at home in the mid-sized ballroom, ready to school the soul-jazz arm of the jam-band scene. In his trio with bassist Vicente Archer and Headhunter Mike Clark on drums, Nicholas Payton blew trumpet like one of the best and played Rhodes and organ with the workmanlike, pocket-savvy simplicity of a midcentury R&B sideman. (As is his wont, he often did both at the same time.) Clark, of a generation when grooves were allowed to cruise instead of being constantly subdivided, provided the requisite earth on highlights like “L for Melvin Lastie,” a Booker T-esque dedication to the New Orleans trumpet player.

Directly at the jazz/R&B source was Friday’s main event, Dr. Lonnie Smith, with a band featuring simultaneous drummers Allison Miller and Kendrick Scott. Smith, back on Blue Note Records where he belongs-his new album comes out in January-just might become the sort of high-profile veteran who can swear off club stands in favor of concert halls and festival headlining slots. Recent gigs, including a closing set at the Charlie Parker festival this past summer, have been devastatingly strong, and his rapport with the underrated guitarist Jonathan Kreisberg has become noticeably deep. (Guitar students: Kreisberg’s solo on “Pilgrimage” needs to be transcribed and studied, for its narrative pacing and absolute balance of jazz-rooted control and blues-rooted fire.) And he’s found a secret weapon in the rising singer Alicia Olatuja, who appeared here on “Pilgrimage” and helped guide a combustible “My Favorite Things.”

The previous night’s headliner, Kamasi Washington, played a set that was more overheated than fiery. Washington, in case you don’t read indie-rock blogs, is a snowballing jazz phenomenon who was undoubtedly why the first night of the festival sold out at around 700 attendees while the second night did not. (Organizers estimate 500 for evening two.) Here, he and his band performed from his terrific if indulgent debut, a three-CD set titled The Epic and containing nearly three hours of music. John Coltrane needed 41 minutes to make his first statement as a bandleader, but hey, let’s not play that game. In 2015, it isn’t wise to be cynical about a young jazz musician maybe getting more attention than he or she deserves; in fact, it’s destructive. The rise of Washington, 34, and his cohorts out of L.A. is a tremendous story of homespun scene creation and jam-session elbow grease, and within it are meaningful lessons for jazz grad students looking to book actual gigs. Some of those takeaways are musical-like realizing that Impulse!, soul-jazz and exotica are more popular sounds than twitchy, unmelodic postbop-and some aren’t, like the importance of cultivating fashion sense and making connections with trendsetters outside of jazz.

Unfortunately at BRIC, the excitement hit a frenzied peak and went further still, until Allan Holdsworth doing a guest spot with the Soul Rebels would’ve seemed quaint. Make no mistake, Washington is a powerhouse tenorman second in his hometown only to Azar Lawrence (who is on a short list of the finest Trane-molded tenor players still working). But pile on Miles Mosley’s wah-soaked arco solos, and Brandon Coleman’s Moog keytar, and the break-the-snare attack of drummers Tony Austin and Ronald Bruner Jr., and the weight of the grooves and the meditative strength of the modal music became undercut. Put another way, even though the tunes and arrangements were straightforward, the bravado musicianship obscured the overall aesthetic. Nevertheless the snug crowd ate it up, and will hopefully parlay some of that enthusiasm into checking out the likes of Dr. Lonnie, and the trumpeter Marquis Hill, and James Carter, whose own overplaying relates directly to R&B’s bar-walking tradition, with an understanding of when to hit and when to quit.

It was the warmest October on record in Seattle. Usually, when the Earshot Jazz Festival comes to town, it provides an escape from the autumn … END_OF_DOCUMENT_TOKEN_TO_BE_REPLACED

It was bracing to stroll into a brand-new creation for a story about destruction. Sixty years after its opening and 45 years after its last … END_OF_DOCUMENT_TOKEN_TO_BE_REPLACED

“You better start swimmin’ or you’ll sink like a stone,” Bob Dylan stated profoundly in 1963. Throughout its unrivaled 65-year history, the Monterey Jazz Festival … END_OF_DOCUMENT_TOKEN_TO_BE_REPLACED

For years, the Pittsburgh International Jazz Festival (PIJF) took place on the street. Over one weekend in June, Downtown thoroughfares Penn Avenue or Liberty Avenue … END_OF_DOCUMENT_TOKEN_TO_BE_REPLACED