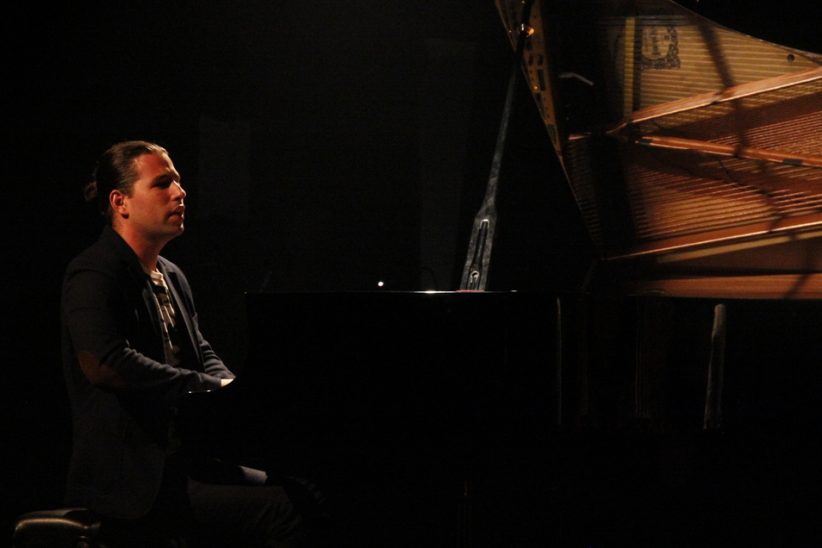 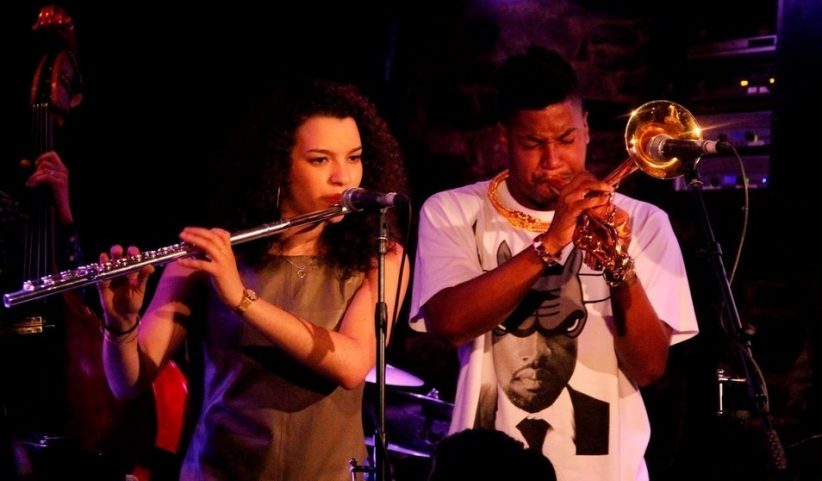 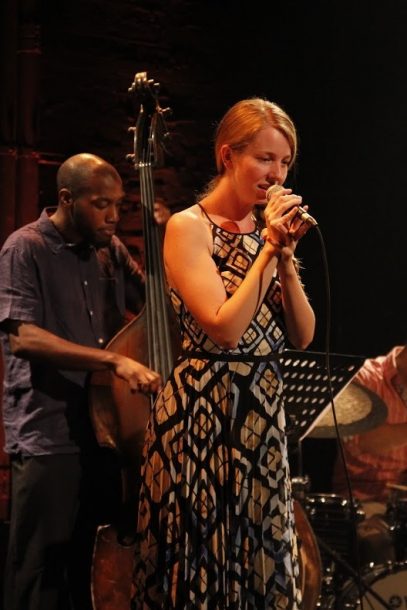 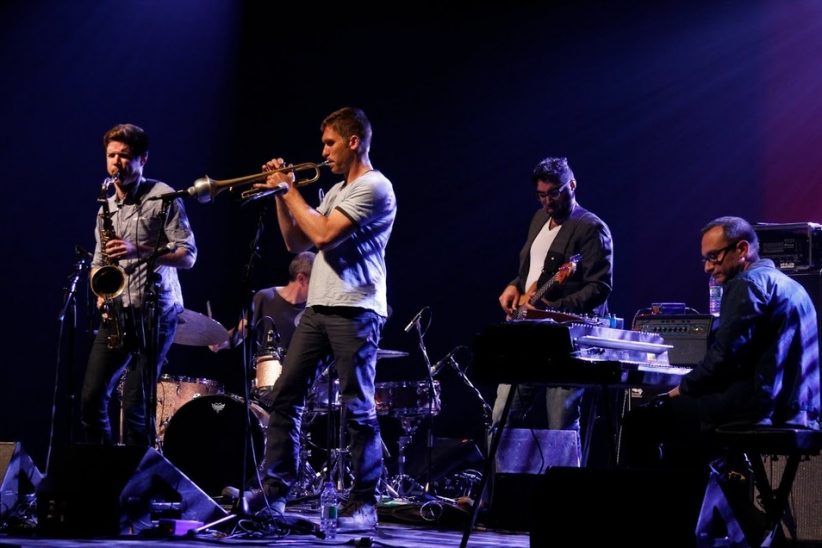 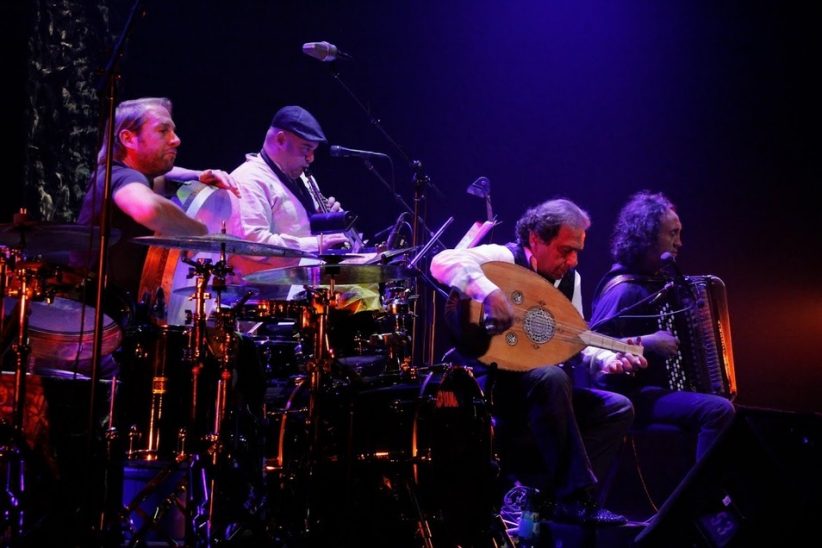 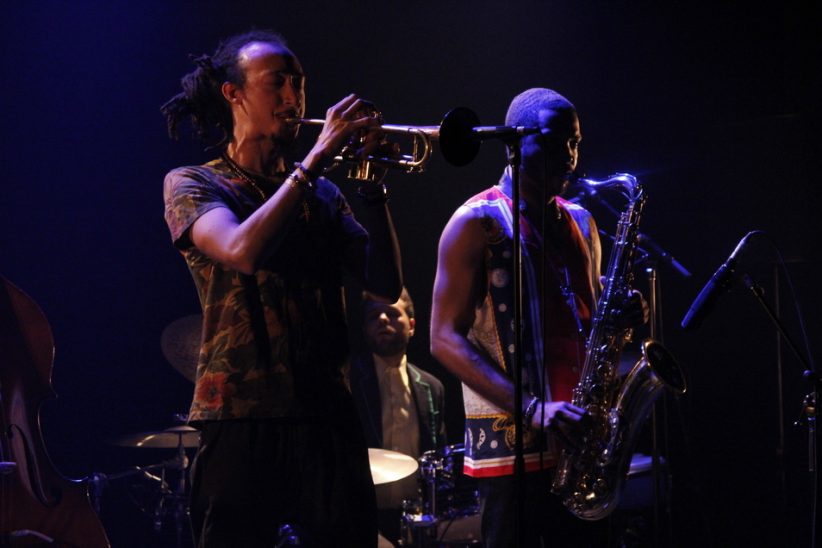 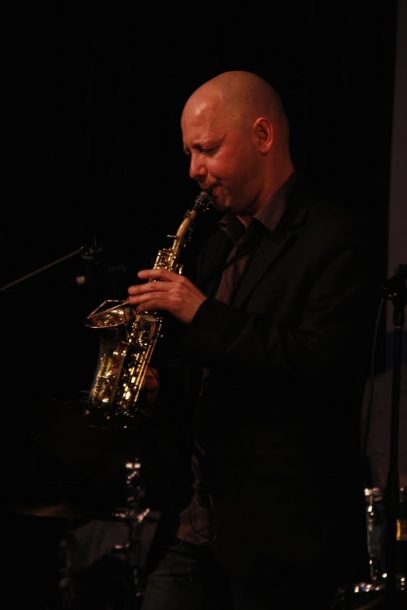 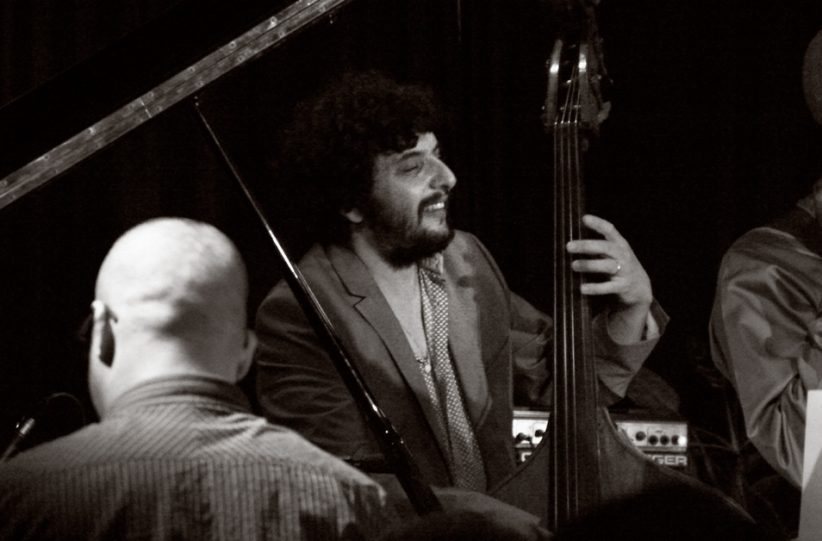 It’s easy to overdose on excellent jazz at the Festival International de Jazz de Montréal, particularly if you’re here for the 10-day duration; best to pace yourself and carefully craft a daily itinerary that, sadly, leaves out a lot of good music.

Opening night was a little less bass-heavy than planned, as Avishai Cohen, scheduled to return to the festival after 13 years, was not able to deliver his anticipated Invitation Series due to a visa mishap (unfortunately, the performance of Nigeria’s reigning juju music monarch, King Sunny Ade, was cancelled for the same reason). Italy-born, Barcelona-raised composer and bassist Giulia Valle, a central figure on the Barcelona jazz scene, led her group through a late afternoon outdoor set, assimilating influences from Spanish, Brazilian and Argentine traditions, her connection with the NYC scene informing her music as well (Valle studied with Scott Colley and Ben Street in New York, and has worked with pianist Jason Lindner and others).

A few blocks west, at the famed Upstairs jazz club, Israeli-born, NYC-based bassist Omer Avital led his blazing quintet (Greg Tardy and Joel Frahm on saxophones, Yonathan Avishai on piano and Johnathan Blake on drums) through two sets of familiar and new music. The set list included “Three Four” (off Avital’s recording with Third World Love), the gnawa-flavored “Afric,” citing influences from Avital’s North African roots, and the swinging encore “Bed-Stuy,” where the two horns played off one another in moving, thrilling ways.

The festival also inaugurated its new outdoor venue, the Club Jazz Casino De Montréal, with local collective the Brooks and magnetic frontman (Jacksonville, Fla., native) Alan Prater, who shook things up as they shared their love of vintage funk, soul and R&B, hundreds dancing the night away.

Kicking the night off at L’Astral was singer-songwriter Emma Frank, a native of Brookline, Mass., performing material from her new album, The People We’re Becoming. Having moved to Montreal nearly a decade ago to study at McGill, Frank has lived there ever since. At 27, she has developed a style all her own, reflecting myriad influences-from folk to pop, R&B to jazz to Joni Mitchell-her songs crafted in a way that allows plenty of space for her bandmates to improvise. Clearly inspired by Mitchell, whose songs Frank occasionally performs, her vocals possess an improvisatory quality even when she isn’t taking a solo. The enthusiastic audience was clearly enthralled.

Frank’s performance at L’Astral was part of the Jazz d’ici series, showcasing both up-and-coming and veteran Quebec jazz artists, many of whom have released albums during the past year, among them pianist Marianne Trudel (stay tuned for un upcoming review of her concert with trumpeter Ingrid Jensen in Part 2); guitarist Thomas Carbou with David Binney and Nate Wood; the Stephen Barry Band-a blues band on the scene for 40 years; pianist Guillaume Martineau and his quintet; and drummer Jim Doxas, presenting music from Blind Leap-his excellent first album as a leader with his tight-knight trio (Doxas also leads the unofficial jam session at House of Jazz).

Simultaneously, Alfredo Rodriguez-a leading voice among contemporary Cuban pianists-performed two stellar sets showcasing his virtuosity and unique style. Classically trained (as many Cuban musicians are), Rodriguez was mentored by Quincy Jones, who co-produced his second album, The Invasion Parade. Reflecting various influences, from traditional Cuban music to conga, guajira and Afro-Cuban jazz, Rodriguez opened with a 20-minute tour-de-force, offering the packed room a mesmerizing display of technique, energy innovation and passion, practically levitating off the piano bench with the last note, and drawing roaring applause. Having grown up watching videos documenting the music performed at this festival over the years, Rodriguez was thrilled to finally be playing here, and the audience was delighted to have him.

The late-night set at the Gesù featured Phronesis, often compared to Swedish piano trio e.s.t. and composed of Danish bass player Jasper Høiby, British pianist Ivo Neame and Swedish drummer Anton Eger. Returning to the Festival with their new album, Life to Everything, the band displayed its strong musical rapport, depth and emotive quality, solidifying its status as one of the most interesting contemporary piano-bass-drums trios around.

With the outdoor concert of young Montreal trumpeter Rachel Therrien sadly rained out, the marathon that was Day 3 began with “electric jazz” outfit Kneebody-Adam Benjamin on keyboards, Shane Endsley on trumpet, Ben Wendel on tenor sax, Nate Wood on drums and Sam Minaie on bass (filling in for Kaveh Rastegar). Opening for the Bad Plus, this impossible-to-peg band blends a ’60s free-bop sensibility with ’70s jazz rock, contemporary indie rock, hip-hop and modern classical minimalism. Commencing with the infectious “Drum Battle”-appearing on a forthcoming new album featuring a saxophone interplay with electronica artist Daedelus-Endsley anticipated that, with Daedelus absent, Wendel would “battle his own inner demons.” As Wood wove in and out of shifting rhythms and Minaie laid down incessant percussive bass lines, Endsley and Wendel explored the tune’s harmony, fusing jazz, funk and rock, and eliciting some serious head banging.

Running up to L’Astral during the break, I heard snippets of Zolani Mahola and South African indie band Freshlyground on the main outdoor stage, making it to Le Balmoral early enough to catch a tune by Israeli-born, Montreal-based saxophonist Tevet Sela (nominated for the festival’s TD Grand Jazz Award and the Stingray Rising Star Award), whose Middle Eastern inflections are amalgamated with classical harmonies, Eastern European influences and North-African rhythms.

Next door at L’Astral, old school, fast-fingered, raspy-voiced jazz pianist and vocalist Johnny O’Neal enchanted with “The More I See You” and “I’m Born Again” (appearing on last’ year’s Live at Smalls), a poignant rendition of Eubie Blake’s “I’d Give a Dollar For a Dime,” and “Where or When,” occasionally sauntering across the stage, scatting and snapping his fingers. Having established himself in the early 1980s, drawing comparisons to pianists in the vein of Art Tatum and Oscar Peterson, O’Neal all but disappeared for nearly two decades; at 58, he is currently enjoying a comeback of sorts.

The discovery of the night came in the form of young flautist Elena Ayodele Pinderhughes-Presidential Scholar and student at the Manhattan School of Music-who, at 20 years old, already possesses a clear and beautiful tone, and is an imaginative soloist and wonderful accompanist to trumpeter Christian Scott. The New Orleans native performed with his sextet at Upstairs over the course of two consecutive nights. Opening with “Twins,” a new tune appearing on an upcoming recording slated for release in September on Scott’s new label, Stretch Music, the quintet continued with Coltrane’s “Equinox,” featuring the young Braxton Cook on alto saxophone; the plaintive “Liberation over Gangsterism,” featuring a gorgeous flute solo; and “New Heroes” by pianist Lawrence Fields, featuring the wind section. Anchored in hard bop/post-bop, Scott demonstrated his chops, singing his bandmates’ praises and offering them plenty of room stretch out, as the rhythm section (Luques Curtis on bass and Joe Dyson on drums) kept pushing the music forward.

Leaving Upstairs, a chance encounter with jazz lovers who made the trip up from Rhode Island revealed a shared affinity for veteran Montreal trumpeter and educator Kevin Dean, who performed off-site at Dièse Onze jazz club, as did some of Montreal’s finest, including saxophonist Al McLean, bassist Alex Bellegarde and saxophonist Christine Jensen, with guest Ben Monder.

Day 4 presented all sorts of scheduling challenges: The John Scofield/Joe Lovano Quartet with Bill Stewart and Larry Grenadier coincided with the power trio of trumpeter Ron Miles, drummer Brian Blade and guitarist Bill Frisell, performing music from Circuit Rider; guitarist Kurt Rosenwinkel and his New Quartet played at the same time as the veteran Québécois trio of Jean Derome (saxophone), Normand Guilbeault (double bass) and Pierre Tanguay (drums). And most of this overlapped with the sold-out concert by “the Queen of Neo-soul” Erykah Badu at Salle Wilfrid-Pelletier, after which she received the festival’s Ella Fitzgerald Award acknowledging range, versatility, improvisational originality and repertoire.

Check out the schedule at Montreal Jazz Fest.

The 2022 Newport Jazz Festival’s three days of sunshine were bracketed, more or less, by a pair of all-star ensemble jams that included Christian McBride. … END_OF_DOCUMENT_TOKEN_TO_BE_REPLACED

In its first full edition since the onset of the pandemic, and with a new director of programming, the Festival International de Jazz de Montréal … END_OF_DOCUMENT_TOKEN_TO_BE_REPLACED

Among the many physical, spiritual, and institutional losses related to the still-ongoing pandemic is that of Los Angeles’ renowned Playboy Jazz Festival (PJF) at the … END_OF_DOCUMENT_TOKEN_TO_BE_REPLACED

It’s difficult to imagine what the stage and the audience would have looked like at Gaillard Center in Charleston, South Carolina, if Rhiannon Giddens’ new … END_OF_DOCUMENT_TOKEN_TO_BE_REPLACED