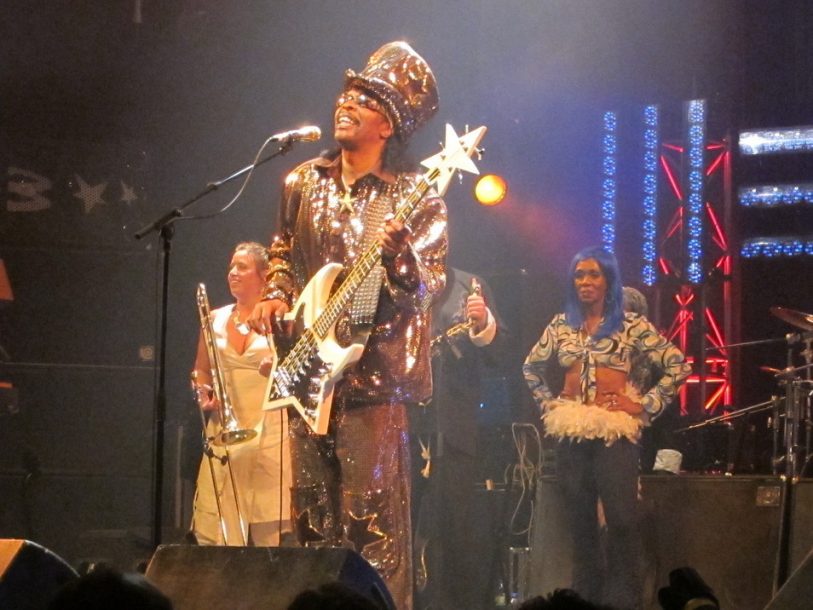 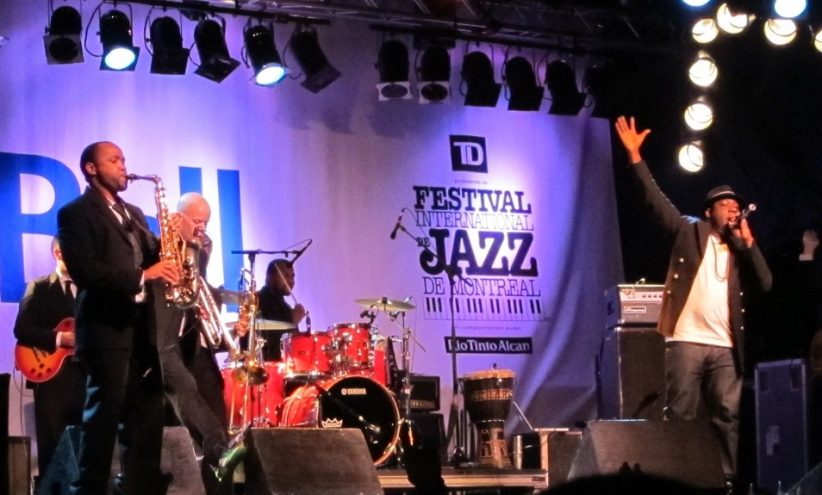 Blitz the Ambassador performing during the 2011 Montreal International Jazz Festival 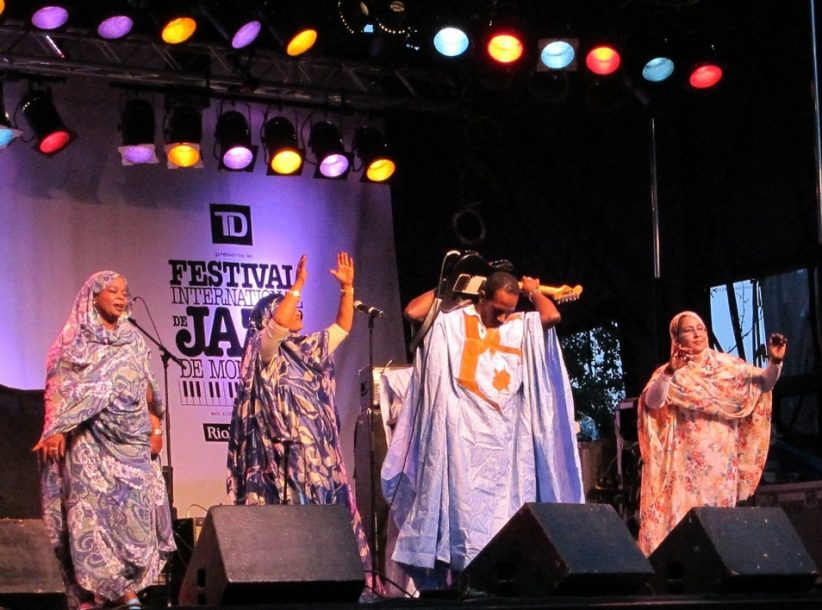 The Doueh Group performing during the 2011 Montreal International Jazz Festival 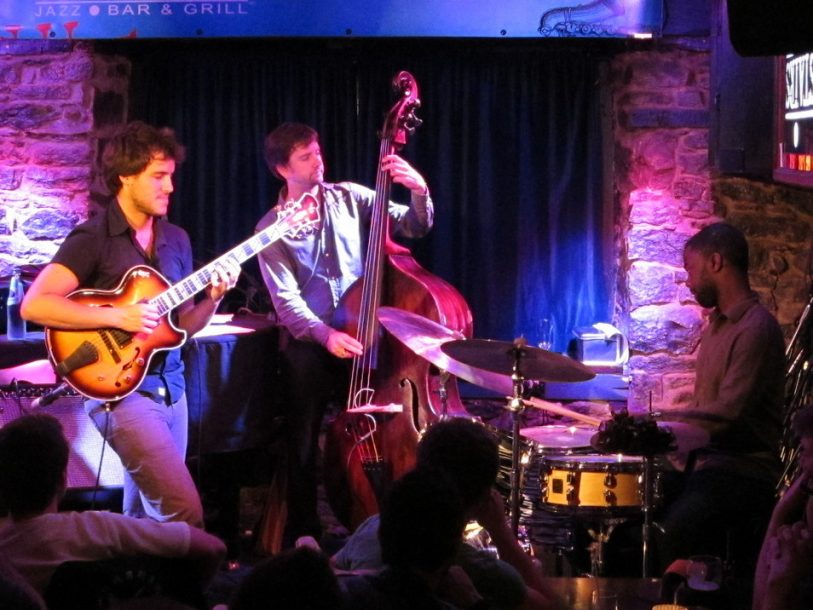 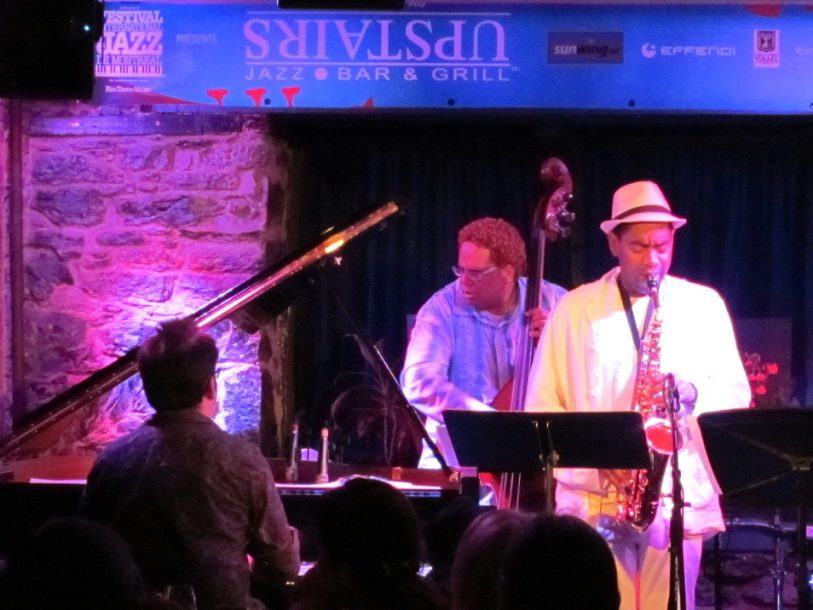 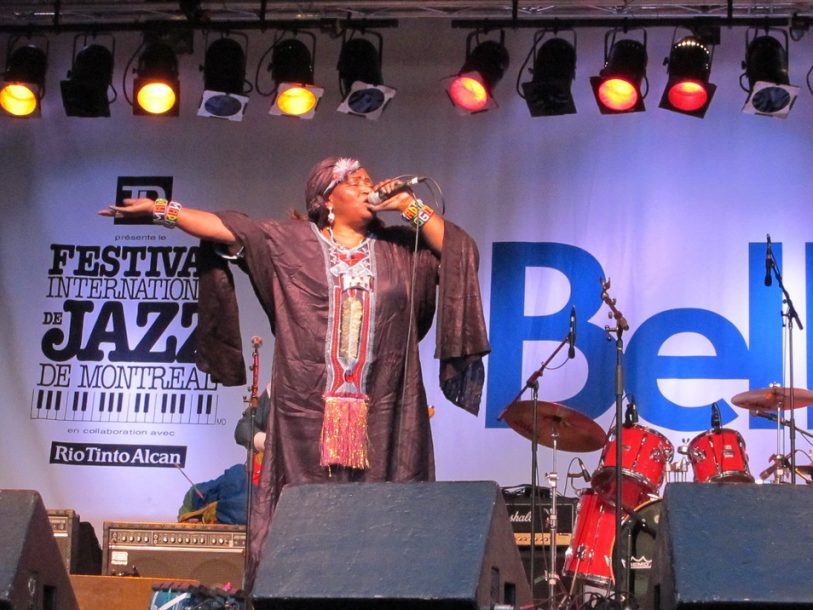 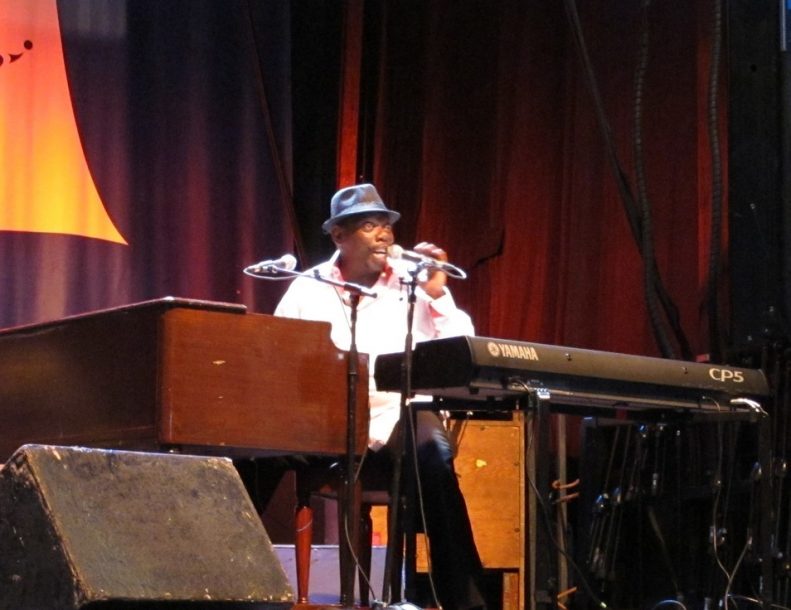 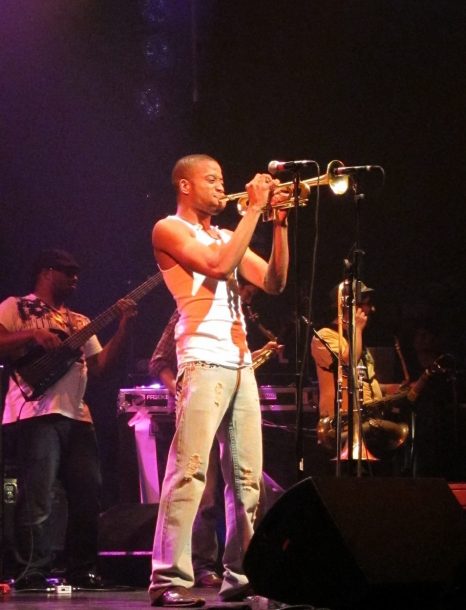 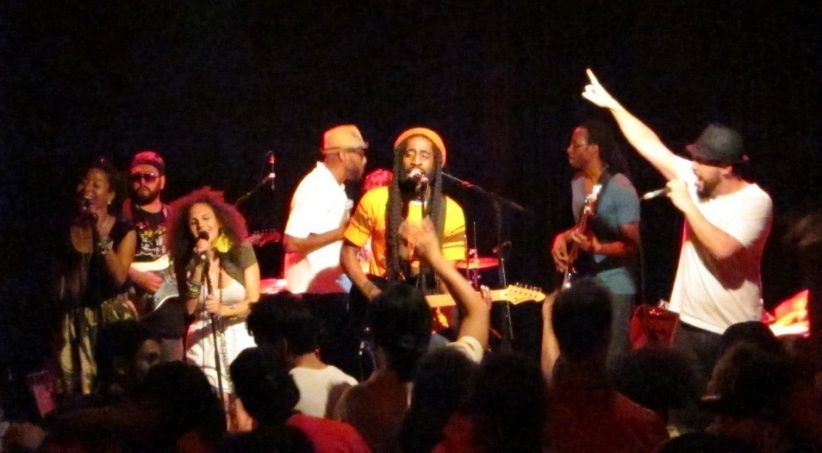 The Gesù offered much in the way of quality and excitement, but there was so much other music to discover in other venues, not to mention the outdoor stages.

A few blocks west of the festival grounds is Montreal’s famed Upstairs jazz club, which hosted an excellent series, opening with the Gilad Hekselman Trio. This young, gifted guitarist, Israeli-born and NYC-based, locked in with Joe Martin on bass and Marcus Gilmore on drums, mixing up standards (“Some Other Time”) with original material (“Suite for Sweets”) and tunes from his upcoming release Hearts Wide Open (“Brooze”). Hekselman played through complex harmonies with fluidity and lyricism, while not shying away from dissonant tensions that didn’t necessarily have predictable resolutions, keeping things fresh and exciting. His trio captivated the Upstairs’ attentive audience, offering Coltrane’s “Countdown” as an encore.

As for the outdoor scene, neither rain nor sweltering heat deterred festivalgoers seeking out music day and night, eager to party. Bluesman Lucky Peterson charmed an enormous audience at the Loto-Québec stage, exhibiting his mighty skills on guitar and Hammond B-3 with an exuberant mix of rock, soul and blues. Peterson delivered Al Green’s “Take Me to the River,” Stevie Wonder’s “Signed, Sealed Delivered” and “Trouble (been doggin’ my soul since the day I was born)” before stepping off the stage and into the audience with his guitar, thrilling the crowd with an unexpected, highly unusual close encounter.

The outdoor stages also featured diverse musical offerings from across the African continent. The Doueh Group of Dakhla – a city in the disputed territory between Morocco and Mauritania – performed on the multicultural Bell stage. Consisting of three singers/dancers, an electric guitar player who’s been justly dubbed the Jimi Hendrix of the Sahara, and a keyboard player filling drum, bass and other duties, the band delivered an electrifying set of desert trans music. Their take on the Sahrawi music of the Western Sahara blended the women’s hypnotic vocals with western soul and rock sensibilities, as Salmou Bamaar (aka Doueh) dazzled on the stringed tidinit and then on electric guitar. I half-expected him to burst into “Purple Haze” as he slung his guitar behind his back and over his head, his unique style and virtuosity driving the crowd into a dancing frenzy as the singers swayed around the stage in their long, flowing traditional outfits.

Ghanaian-American MC Blitz the Ambassador rocked the Bell stage with his exceptional flow and original brand of hip hop, mixing funk, soul and Afrobeat with his socially conscious, Afro-centric lyrics. Opening with “Akwaaba” (“welcome” in the Ashanti language of Ghana), off his recently released Native Sun, and with a full band including a hot horn section, Blitz lifted the crowd, speaking of the universality of hip hop as well as the “real side of things” in Africa (the oil, gold and diamond trade, corrupt governments, police and army brutality). “We can’t go on like this!” Blitz called out, and the roaring crowd chanted back: “Get involved! Get involved!”

South African Afro-fusion band Freshlyground, led by singer Zolani Mahola, performed two crowd-pleasing sets on the Rio Tinto Alcan stage, their distinct sound blending traditional kwela and African folk with jazz, blues and rock. No one seemed to mind the uncharacteristically low temperatures or chilling wind that night; everyone just wanted to have a good time.

My last African installment was “the Nightingale of Mali’s North,” Khaira Arby. The Malian singer, surrounded by a band of young musicians hailing from Timbuktu and playing traditional and western instruments, unleashed her powerful, evocative vocals on songs relating to their desert land’s history and struggles. An ardent feminist, she spoke of women’s equality and empowerment, drawing cheers from the hundreds of people crowding the stage.

Last summer’s closing Mardi Gras extravaganza was a huge hit; this year the festival invited back the Soul Rebels Brass Band, who rocked the main TD stage with their infectious New Orleans musical mélange. Walking from venue to venue the following night I caught glimpses and sound bytes of the New Orleans-based jazz-funk band Galactic who, on the heals of their latest recording The Other Side of Midnight: Live in New Orleans, played the festival’s main stage, their signature sound mixing funk, jazz, hip hop, rock and deep soul with rumbling basslines and driving guitars.

Young “supafunkrock” phenom Trombone Shorty & Orleans Avenue opened for His Imperial Funk Majesty Bootsy Collins, though the order could easily have been reversed; Shorty delivered a scorching set to a frenzied crowd at the Metropolis, preceding an uneven, largely disappointing set from Bootsy. The rising New Orleans star delivered hits (“Something Beautiful”) as well as a tribute to Louis Armstrong (“The Sunny Side of The Street”), playing more trumpet than trombone; at one point he flaunted his circular breathing technique, holding what seemed like an endless note before collapsing onto the stage, breathless. Shorty’s adoring crowd could have danced on for hours, but the stage had to be reset for Bootsy; after a brief one-hour show he offered “When the Saints Go Marching In” as an encore, leaving them wanting more. Bootsy, touring in support of his recently released Tha Funk Capitol of the World, had likely hoped to transform Montreal into the world’s Funk Capital that night; sadly, he fell short. After a solid 30-minute run through some beloved funk anthems, supported by Parliament-Funkadelic veterans, Bootsy disappeared for over 20 minutes, his hypeman and band unable to hold the crowd’s attention. By the time he reached “I Got the Munchies for Your Love” his consistently dwindling audience was mostly gone.

Montreal’s own Nomadic Massive sealed the deal after the B-52’s mega-concert on closing night. Holding court for four straight nights at the Savoy, they packed the room, throngs waiting outside hoping to get in. The high-energy group, replete with a horn section and MCs delivering conscious lyrics in English, French, Creole, Spanish and Arabic, performed songs from their first album, Nomad’s Land, some Afro-funk and vintage reggae. This truly international, multi-cultural band that is the quintessence of Montreal was the perfect close-out to the 10-day festivities.

Another triumphant edition of the Montreal Jazz Festival!

“It’s time to imagine a place where we can come together,” Danilo Pérez said from the hallowed stage of Washington, D.C.’s historic Sixth & I … END_OF_DOCUMENT_TOKEN_TO_BE_REPLACED

At the Zeiders American Dream Theater in Virginia Beach, Va., between April 8 and 10, the Vocal Jazz Summit convened in person for the first … END_OF_DOCUMENT_TOKEN_TO_BE_REPLACED

The Big Ears Festival returned to Knoxville in a big way in late March, drawing an estimated 30,000 music enthusiasts from across the U.S. and … END_OF_DOCUMENT_TOKEN_TO_BE_REPLACED

Let’s get this out of the way: The Savannah Music Festival is not a jazz festival. Held over the course of 17 days in late … END_OF_DOCUMENT_TOKEN_TO_BE_REPLACED