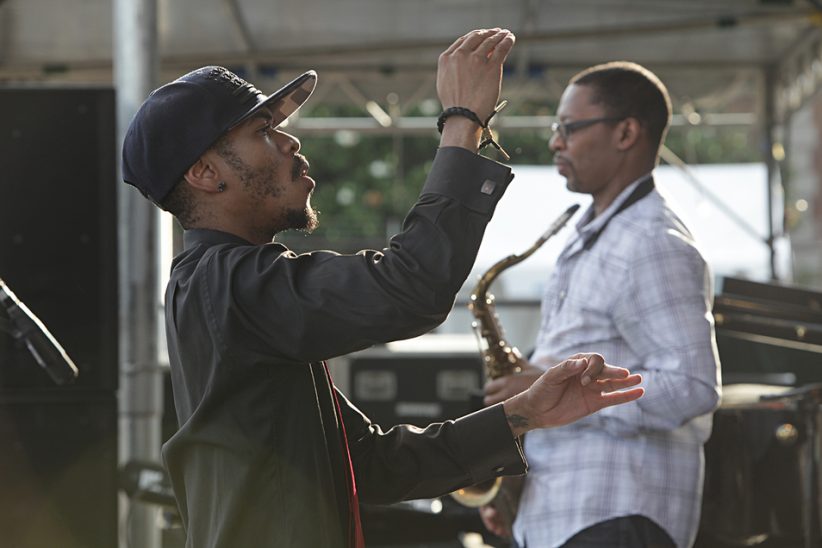 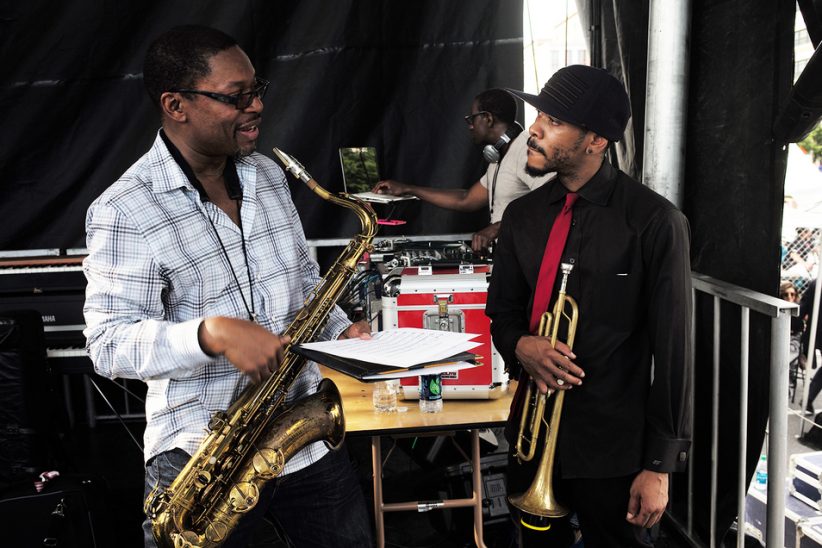 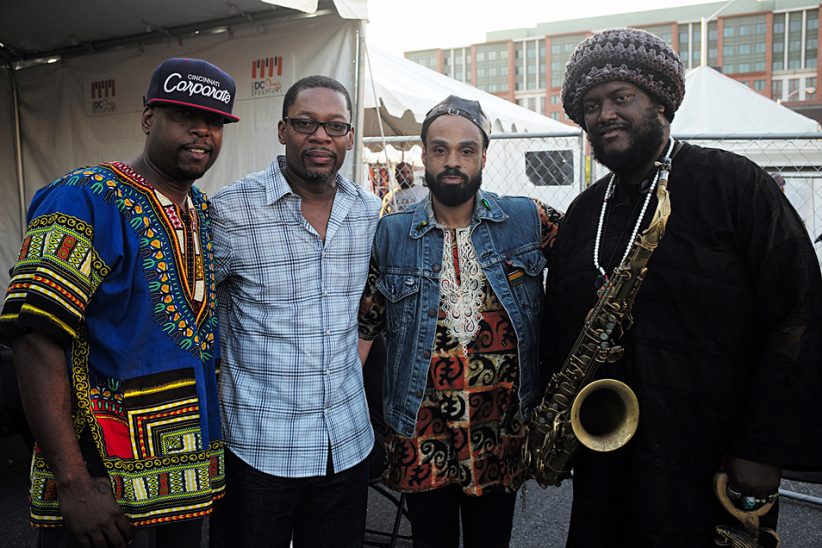 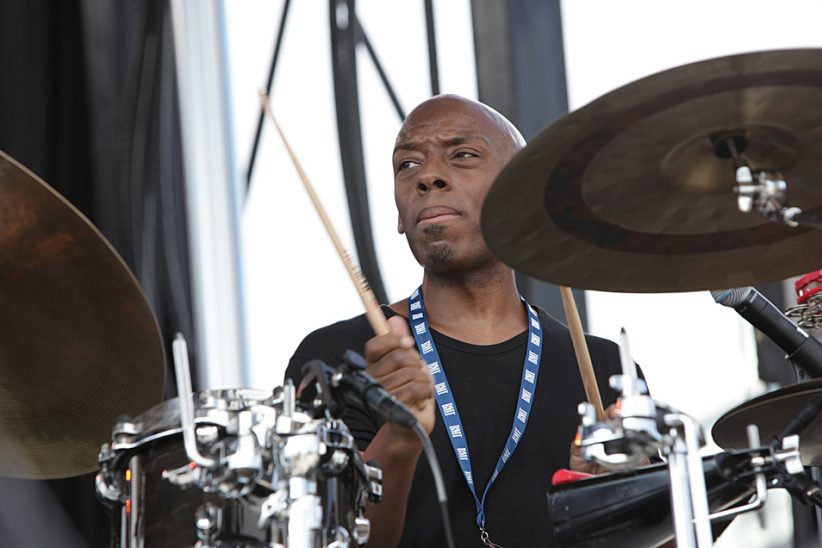 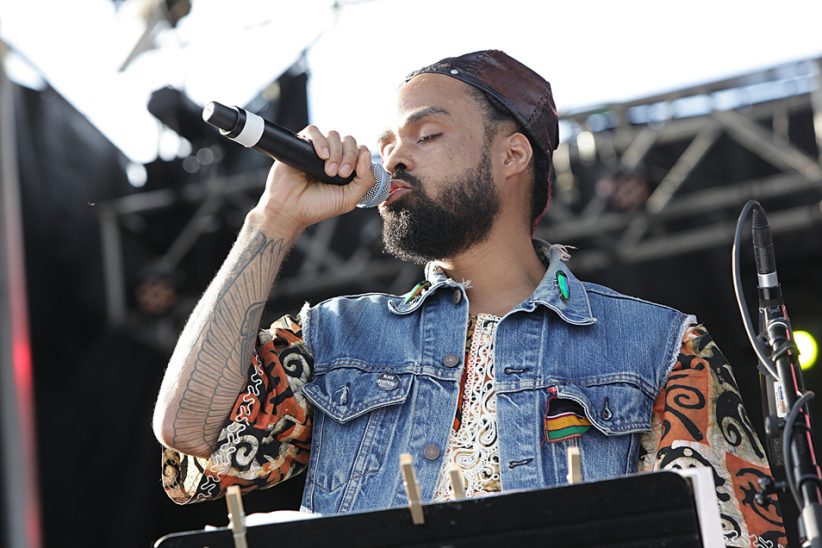 In May of 2015, Los Angeles saxophonist Kamasi Washington released his triple-disc debut album, The Epic-and promptly became a phenomenon, critically adored and featured in newspapers, magazines and on Charlie Rose. It’s the most meteoric rise of any jazz musician in recent memory, perhaps in a generation. To wit: Thirteen months later and against all odds, still-newcomer Washington finds himself closing the 2016 DC Jazz Festival.

In fairness, his performance on June 19 (the last of the festival’s 10 days) had a hell of a lead-in. Washington headlined a seven-hour marathon of music that was part of the festival’s “DC Jazz Fest at the Yards” segment. Held for its fourth year at Yards Park, a picturesque (and futuristic) outdoor space near the Washington Nationals’ baseball park, the lineup also included trumpeter Igmar Thomas and the Revive Big Band; drummer E.J. Strickland’s electric group, Transient Beings; and D.C. alto saxophonist Fred Foss, paying tribute to his mentor Jackie McLean.

Foss opened the afternoon with a low-key but immensely enjoyable acoustic set. His alto tone was in itself a tribute to McLean’s-tart, bluesy and slightly sharp. It was never slavish, however; Foss’ creativity steered clear of that, heaping piles of blues upon a rhythm tune and steering McLean’s “Melody for Melonae” into even more adventurous territory than its author. His band helped with the heavy lifting as well; pianist Cyrus Chestnut and bassist Herman Burney offered stunning solos on a “Sweet Georgia Brown” contrafact before trading eights with punctilious drummer Savannah Harris.

Strickland, another sharp-eared drummer, came next. Mistress of ceremonies (and DCJF executive director) Sunny Sumter described his five-piece Transient Beings as a “jazz, Afrobeat, hip-hop, funk, fusion and more band.” Strickland’s introductory drum solo bore witness to that catholic description: try as one might, it couldn’t be pinned to any single musical tradition. Once the band came in, however, they divvied up the component parts: Strickland assayed complex funk, bassist Richie Goods gave the music a hip-hop thump, rhythm guitarist Tom Guarna added a counter-rhythm derived from West Africa, David Gilmore added flashy fusion guitar, and Thana Alexa provided a jazz vocal. Alexa’s microphone presented some sound problems. Early in the set, she several times requested that her volume be turned up, but doing so audibly shorted out the mic. But the ensemble was powerful enough to transcend those problems, particularly with their closing “Testimonial,” on which Alexa, Strickland and Gilmore were swathed in a phase effect that added a layer of psychedelia to their already heady stew.

Thomas and the Revive Big Band, one of the most reliably adventurous ensembles on the jazz map, debuted a new project at the Yards. Thomas called it “A Journey Through the Legacy of Black Culture,” which explored African-American musical evolution from the Delta blues (“Sitting on Top of the World”) and early jazz (“Potato Head Blues”) through an uproarious big-band arrangement of Afrika Bambaataa’s seminal rap record “Planet Rock.” It was an ambitious program, and it delivered, thanks to extraordinary work by Thomas, trombonist Kuumba Frank Lacy (who stood in for electric slide guitar during the Chicago blues segment) and pianist James Francies. Not to mention special guests. Neo-soul singer Bilal provided the bulk of the vocals, including stand-ins for Howlin’ Wolf (“How Many More Years”), Ray Charles (“I Got a Woman”), James Brown (a medley) and Stevie Wonder (“Higher Ground”). Rapper Talib Kweli acted as the MC for the project’s hip-hop element, dropping what seemed to be freestyle lyrics in his socially conscious vein about the relationship between African-American music and American race relations. The third guest was tenor saxophonist Ravi Coltrane, who shone on two segments of the program that represented developments in jazz: a slow, pretty, pathos-laden take on his father’s “Central Park West,” and a ferocious, harmonically askew performance of Monk’s “Thelonious.” The latter was one of the show’s true highlights, its arrangement featuring many moving parts and a deliciously shambolic solo by Francies, before Thomas veered it sharply into hip-hop.

(At the same time, though, Revive was responsible for the evening’s most baffling musical moment. For the third tune, Thomas announced Thomas A. Dorsey’s gospel classic “Take My Hand, Precious Lord.” But the tune itself, sung by tenor saxophonist James Casey, was very clearly a gospelized version of Carole King’s “You’ve Got a Friend”-similar to Aretha Franklin’s mashup of the two songs, but without reference to “Take My Hand.” Far from explaining, Thomas again referred to Dorsey’s title at its conclusion.)

It was dark-nearly 9 p.m.-when Washington took the stage with his seven-piece band, curtailed from the 30-plus musicians that appear on The Epic. But this made the roar of sound that began his set that much more thrilling. It never let up through “Askim,” “Final Thought” (featuring keyboardist Brandon Coleman on keytar) and an arrangement of Terence Blanchard’s “Malcolm’s Theme” (with Washington’s father Rickey guesting on flute). Several times the speakers erupted in feedback, but the fault wasn’t the festival’s: Washington and his band simply overwhelmed the sound setup. The saxophonist, trombonist Ryan Porter, and singer Patrice Quinn brought something close to religious ecstasy to Yards Park, a fitting capstone to a day of music that was larger than life.

Among the many physical, spiritual, and institutional losses related to the still-ongoing pandemic is that of Los Angeles’ renowned Playboy Jazz Festival (PJF) at the … END_OF_DOCUMENT_TOKEN_TO_BE_REPLACED

It’s difficult to imagine what the stage and the audience would have looked like at Gaillard Center in Charleston, South Carolina, if Rhiannon Giddens’ new … END_OF_DOCUMENT_TOKEN_TO_BE_REPLACED

“It’s time to imagine a place where we can come together,” Danilo Pérez said from the hallowed stage of Washington, D.C.’s historic Sixth & I … END_OF_DOCUMENT_TOKEN_TO_BE_REPLACED

At the Zeiders American Dream Theater in Virginia Beach, Va., between April 8 and 10, the Vocal Jazz Summit convened in person for the first … END_OF_DOCUMENT_TOKEN_TO_BE_REPLACED