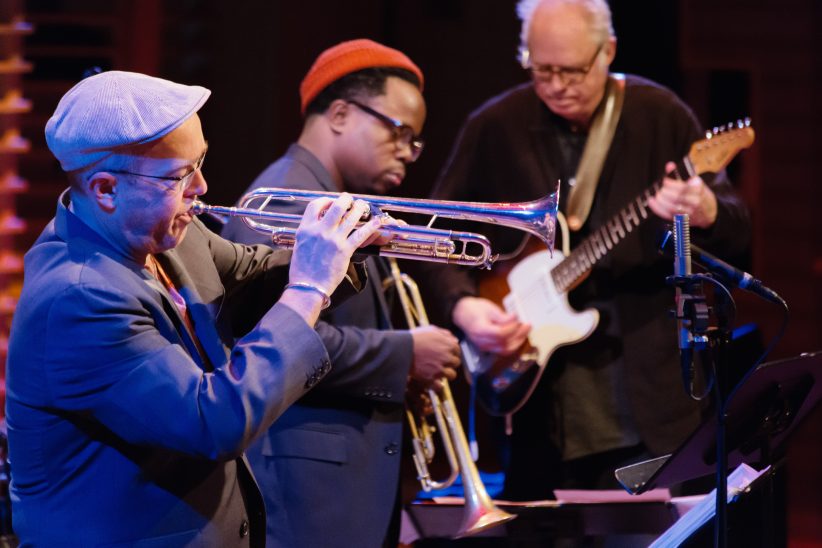 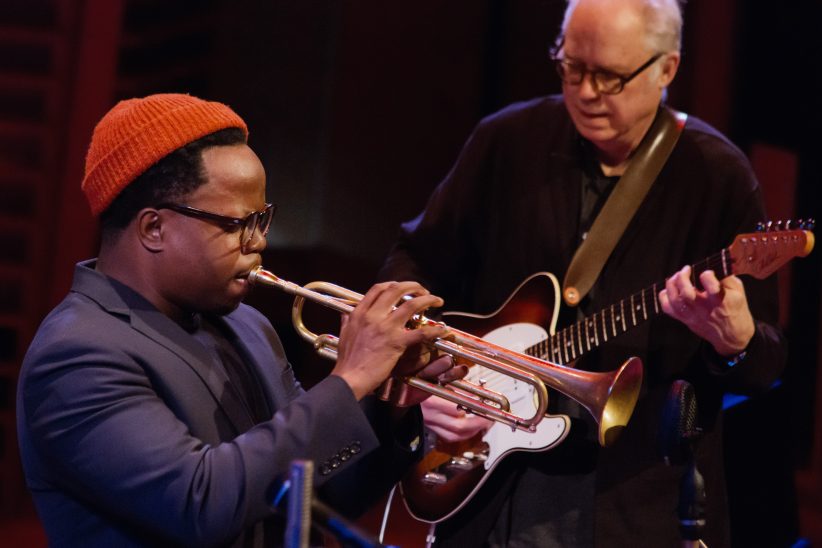 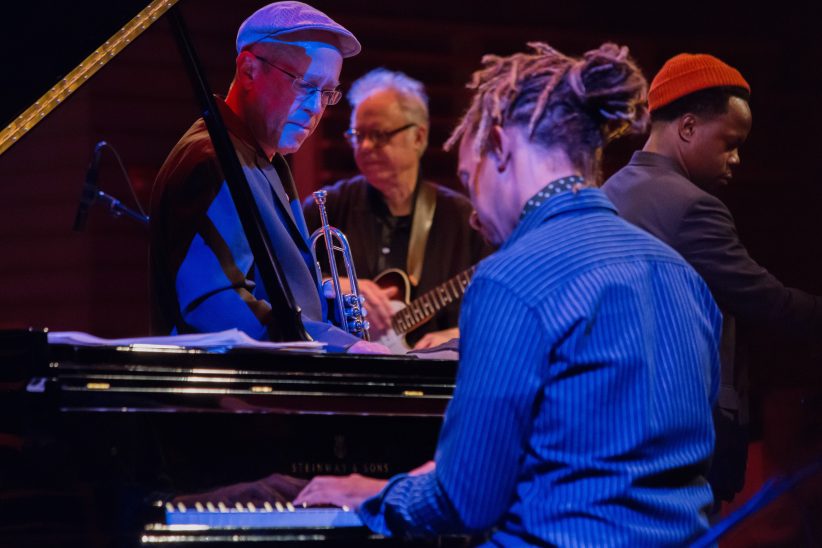 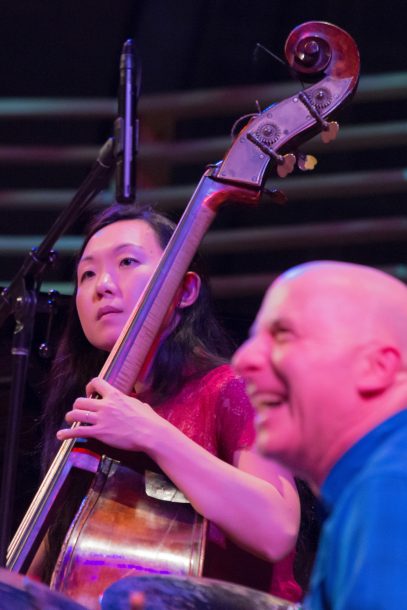 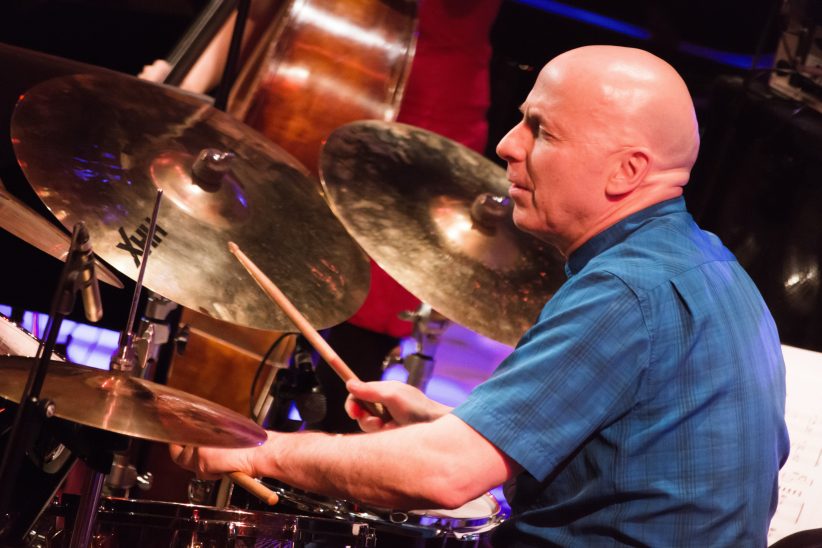 For Dave Douglas, the art of the tribute has never been about the act of strict repertory theatre. In saluting undersung trumpeter Booker Little, honoring trailblazing pianist-composer Mary Lou Williams, nodding toward Lester Bowie’s Brass Fantasy (with his own Brass Ecstasy) and highlighting the importance of any number of horn heavies through his role as President and Co-Founder of the Festival of New Trumpet Music (FONT), Douglas has made it clear that he prefers cambered roads to straight highways. Deep respect and strong historical foundations support each and every one of his dedicatory designs, but innovation and a penchant for rebuilding from the cellular level on up typically inform such projects to an equal if not greater extent. That’s easy to hear on recordings recognizing the aforementioned figures, and it was plainly obvious in the unveiling of Dizzy Atmosphere.

Programmed as part of Jazz at Lincoln Center’s centennial celebration of Dizzy Gillespie, this event found Douglas taking a sui generis collection of creative leading lights through a performance that proved revelatory in its modernizing strengths and resourceful in its refashioning of the titular figure’s canonical works. Adopting Wayne Shorter’s “Zero Gravity” mantra, both as part of the concert’s subtitle and as an overarching conceit, the sextet beamed in emissions from the great beyond which eventually coalesced in collective stabilization. At the show’s dawn, drummer Joey Baron’s coloristic contributions arrived with the meeting and meanderings of thin dowels, guitarist Bill Frisell added to the cosmic trip with looping blips, and various thrums and refractions tangled in the mists before Douglas and his frontline partner, fellow trumpeter Ambrose Akinmusire, set the intriguing “Almazan” on its clear course. The painterly poetics of the two trumpeters belied the wild horn sprees to come, Baron’s eventual addition of a streamlined groove and artfully caustic rejoinders upped the ante, and conversational episodes and solos—Frisell mingling with pianist Gerald Clayton, Frisell and bassist Linda May Han Oh each moving to the fore at separate times—seduced before the ensemble circled back around.

A segue from that mystery-laced opener brought the band to one of the feel-good moments of the night—an electrifying “Manteca.” Fractured riffs from the classic big-band chart hinted at its arrival, Douglas brilliantly extemporized, Clayton and Akinmusire traded solos with aplomb, and a surprisingly loyal rendering of the familiar bop-swing section made for a crowd-pleasing moment. Baron, threatening to steal the show here and elsewhere, stamped his signature blend of puckish wit, animalistic fervor and serious groove all over this music. Then, in a complete shift of mood leading toward a dreamy romance with the unknown, Akinmusire took to the spotlight with the most audacious and impressive of breakout displays.  Using extended techniques—circular breathing, spurts and splutters, puckered postulations, a percussive and rolling use of mouthpiece in bell—he held the room in rapt fascination.

Those first four numbers presented as an artistic representation of the wandering spirit that served Gillespie well throughout his career. The remainder of the program, with a slightly more centralized unfolding, played like a musical encapsulation of Diz’s joy and heart. Trips through retooled classics like “Blue ‘N’ Boogie” and “Pickin’ the Cabbage” spoke to artistic flair, and “We Pray,” a mournful ballad housed in the penultimate slot, represented pure empathy. In its sum total, Dizzy Atmosphere and its cross-connected comrades managed to acknowledge and salute Gillespie’s pioneering efforts without ever mimicking his motions or taking on his mantle. You couldn’t ask for a truer tribute to this giant.

The 2022 Newport Jazz Festival’s three days of sunshine were bracketed, more or less, by a pair of all-star ensemble jams that included Christian McBride. … END_OF_DOCUMENT_TOKEN_TO_BE_REPLACED

In its first full edition since the onset of the pandemic, and with a new director of programming, the Festival International de Jazz de Montréal … END_OF_DOCUMENT_TOKEN_TO_BE_REPLACED

Among the many physical, spiritual, and institutional losses related to the still-ongoing pandemic is that of Los Angeles’ renowned Playboy Jazz Festival (PJF) at the … END_OF_DOCUMENT_TOKEN_TO_BE_REPLACED

It’s difficult to imagine what the stage and the audience would have looked like at Gaillard Center in Charleston, South Carolina, if Rhiannon Giddens’ new … END_OF_DOCUMENT_TOKEN_TO_BE_REPLACED