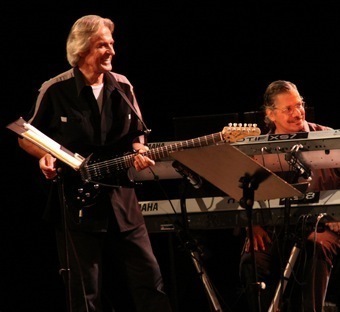 It’s always instructive to attend opening and closing nights of an extended engagement. Often, a given band will hit its stride on the bandstand over the course of the week and be flying by the final night. Sometimes the opposite happens. The excitement of opening night and thrill of the first-time hit can result in sheer sparks on the bandstand that only become more muted and predictable with repetition.

Then again, there are bands that don’t hold to a prescribed set list, where each night is entirely its own unique entity. These bands not only don’t play the same thing twice, they don’t even play the same thing once. Such was the case with the Five Peace Band, which occupied the stage for the first weekend of Chick Corea’s month-long 70th birthday celebration at the Blue Note. In its initial phase, this fusion supergroup composed of Corea on keyboards, John McLaughlin on guitar, Kenny Garrett on alto sax, Christian McBride on bass and either Vinnie Colaiuta or Brian Blade on drums played large concert halls on tour in 2008 and 2009. To fit these cavernous venues and play to the back row, they necessarily affected a rock-band aesthetic. This scenario invariably led to the kind of bombastic chops-grandstanding that defeats nuanced interplay. But on Nov. 4, the opening night of their three-night engagement in the intimate Greenwich Village nightclub, these seasoned virtuosos were cooking on a low flame and conversing in subtle ways that would never read in the big concert halls.

For JazzTimes’ (and this writer’s) first time back to physical, face-front-to-the-stage live performance in more than a year, one thing was certain: It was spooky. … END_OF_DOCUMENT_TOKEN_TO_BE_REPLACED

On January 10, 2010, an earthquake measuring 7.0 on the Richter scale struck Haiti, destroying much of its capital city, Port-au-Prince. Ten years later, with two … END_OF_DOCUMENT_TOKEN_TO_BE_REPLACED

There’s no way to cover Winter Jazzfest in its entirety—11 days of performances, talks, and other events at 21 venues in two New York City … END_OF_DOCUMENT_TOKEN_TO_BE_REPLACED

The Polish city of Wrocław—population 640,000—doesn’t have a very robust jazz scene, but for 10 days this past November it was transformed into one of … END_OF_DOCUMENT_TOKEN_TO_BE_REPLACED