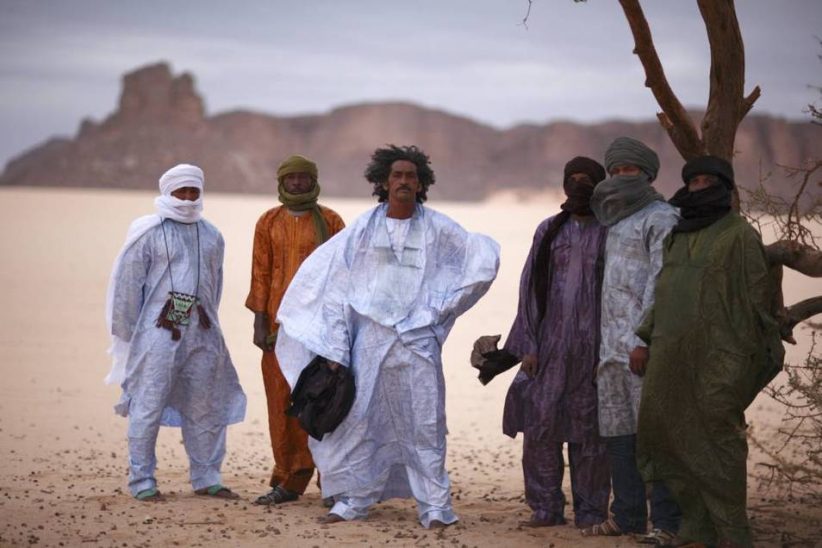 Not much can warm a cold, grey evening in West London. Tinariwen’s inimitable desert blues, however, is a rare exception. Riding high off their recent success at the Grammys, the Tuareg rockers from the Sahara, adorned in their full desert regalia, were in typically stunning form as they played to a packed Shepherd’s Bush Empire, put on by music promoters Soundcrash.

For those unaware of this exceptional outfit, Tinariwen is an ever-shifting band (for this gig, they were a six-piece) of Tuareg-Berber musicians from northern Mali. They were founded by Ibrahim Ag Alhabib, who, as a boy, saw a western film in which a cowboy played a guitar, inspiring him to construct his own guitar from a tin can, stick and bicycle brake wire-so the story goes. With war raging in his Malian homeland, he grew up in Libyan refugee camps, jamming with fellow young Tuaregs who drew on the local assouf style and bootlegged cassettes of Santana, Led Zeppelin, Dylan, Marley and Hendrix that found their way into the refugee camps.

Ibrahim formed Tinariwen around 1979 in the camps but the men soon joined the Libyan military after former dictator Gaddafi issued a decree in 1980 inviting all young Tuareg men living illegally in Libya to receive full military training. During their army years, they continued to sing and play guitar, vowing to record music for free for anyone who supplied a blank cassette tape. It wasn’t till 2001 that the group started to gain a following outside the Sahara with the release of The Radio Tisdas Sessions and performances at Mali ‘s Festival au Désert and Roskilde in Denmark. Their critically acclaimed album Aman Iman in 2007 then propelled them into the international limelight.

Their material at the London gig drew on their entire oeuvre from early releases to their latest record, Tassili (which recently won the Grammy for Best World Music Album). Vocals were mainly shared between Hassane in orange, Abdallah in green and Imtidaw in yellow, backed by other-worldly ululations from Mina, the band’s sole female member. The first trance-like openers-all built on repetitive patterns but far from tedious-had promise but their infectious, pounding fusion of desert blues properly took off halfway. Swedish-Argentinean singer/guitarist Jose Gonzalez (their support act in the first half) joined them for “Tenere,” a song about treasures in the desert; his mellow, haunting vocals blended perfectly with their desert grit and distorted Stratocasters.

Their occasional stripped-down acoustic blues numbers provided fine counterpoint to their distorted electric sounds, like a troupe of Saharan Robert Johnsons. One hypnotic a cappella song, with just an Arabic flute melody over the droning vocal canon, was particularly memorable. After rowdy demands for an encore, they built toward a spectacular finish with intricate guitar work, heartfelt vocals and an enthusiastic crowd jumping and clapping along.

Neither kitsch nor gimmicky, this tough ensemble has weathered well with their gritty heritage and is far ballsier than their whole-foods, world music label suggests. Admirably, despite their success and international standing, they have stuck to their roots (their most recent album, for example, was recorded in a remote desert town in southern Algeria ). Perhaps the only downside of the gig was the absence of their founder and ragged-haired singer Ibrahim, who remains in Mali. His soulful vocals make him one of the true kings of desert blues and his presence would have been a bonus.

This year is going to be important for Tinariwen, not only because of the awards but because the Touareg have declared an independent homeland in Mali, a country increasingly blighted by political troubles and sectarian violence. Yet there was no mention on stage about such worries-instead, the emphasis was solely on their music, firmly rooted in survival and solidarity.

For more of the same, check out Tinariwen’s younger compatriots, Tamikrest and Terrakraft, as well as the joyous music of Vieux Farka Touré, son of the late great Ali.

It’s difficult to imagine what the stage and the audience would have looked like at Gaillard Center in Charleston, South Carolina, if Rhiannon Giddens’ new … END_OF_DOCUMENT_TOKEN_TO_BE_REPLACED

“It’s time to imagine a place where we can come together,” Danilo Pérez said from the hallowed stage of Washington, D.C.’s historic Sixth & I … END_OF_DOCUMENT_TOKEN_TO_BE_REPLACED

At the Zeiders American Dream Theater in Virginia Beach, Va., between April 8 and 10, the Vocal Jazz Summit convened in person for the first … END_OF_DOCUMENT_TOKEN_TO_BE_REPLACED

The Big Ears Festival returned to Knoxville in a big way in late March, drawing an estimated 30,000 music enthusiasts from across the U.S. and … END_OF_DOCUMENT_TOKEN_TO_BE_REPLACED