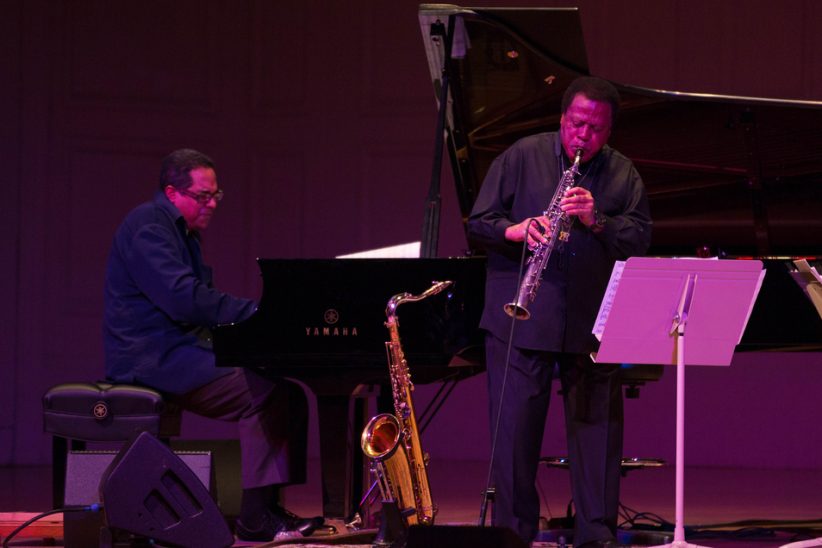 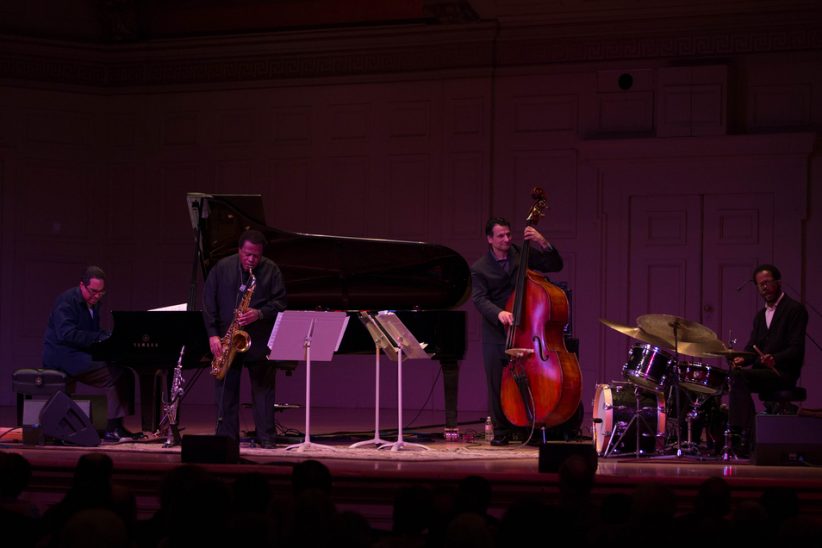 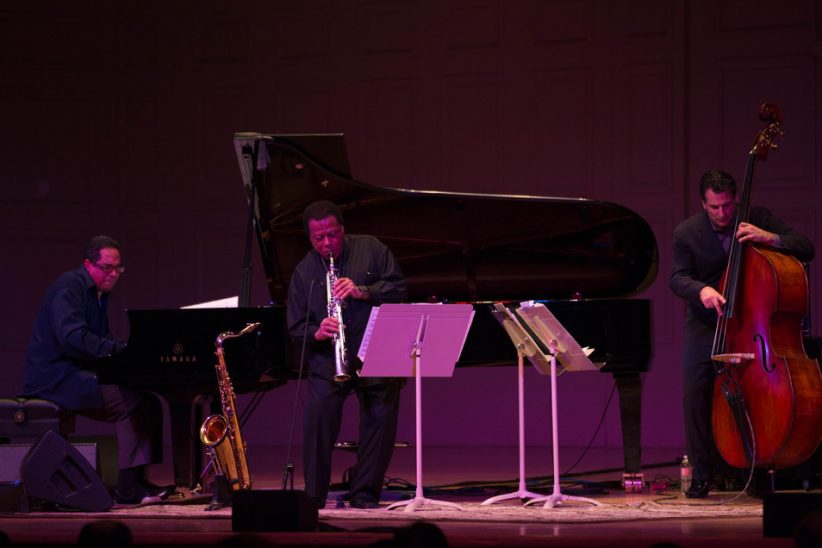 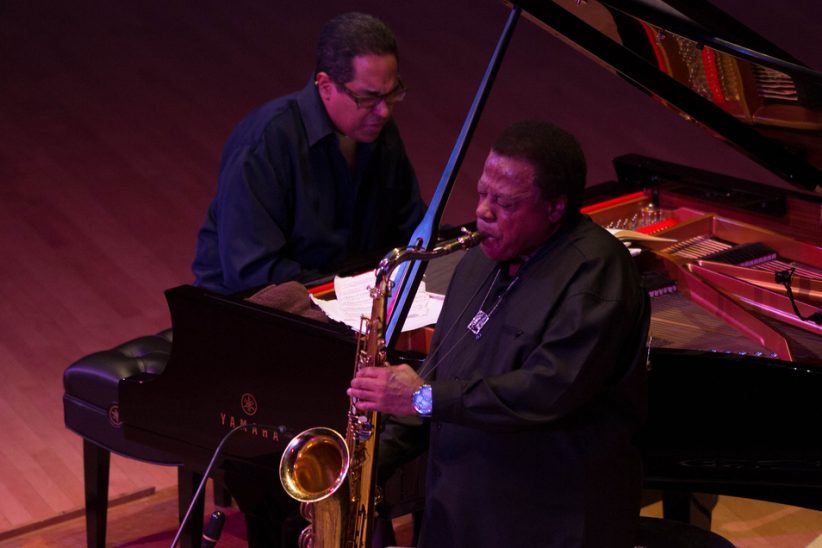 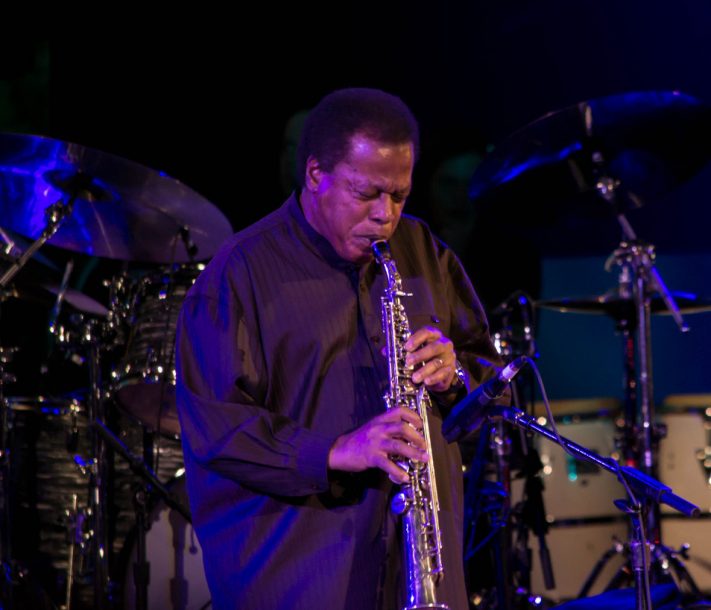 The Celebrity Series of Boston brings some of the best concert-hall jazz to the city each year, and this past weekend, as part of its own 75th anniversary year, it outdid itself by booking what must surely have been the last of this year’s several celebrations of Wayne Shorter’s 80th birthday (whose actual date was August 25): a triple header at Symphony Hall of the trio billing itself ACS (for Geri Allen, Terri Lyne Carrington and Esperanza Spalding), the Dave Douglas and Joe Lovano co-led quintet Sound Prints, and Shorter’s own magnificent and longstanding acoustic quartet. For all that instrumental firepower, however, the evening was most memorable for reinforcing Shorter’s status as one of jazz’s greatest composers.

The hall was full of musicians (Miguel Zenón, Bill Pierce, Aristides Rivas and Tupac Mantilla of the Julian Lage Group, and the husband-wife duo Mili Bermejo and Dan Greenspan were among those in the audience) when ACS took the stage shortly after 5 p.m. for a set of their arrangements of a half-dozen Shorter classics. They led off with pieces associated with two previous great bands Shorter had been in: “Masqualero” (which appeared on the 1967 Miles Davis quintet album Sorcerer) and “Mysterious Traveller” (from the so-titled 1974 Weather Report album). Carrington soloed on drums early into “Masqualero,” with Spalding bowing the lead for a stretch on bass and Allen providing sparse, thoughtful comping on piano.

Spalding had seemed more a sidekick on the trio’s previous pass through Boston, but this time she was upfront with her trio mates and clearly enjoying herself flashing her jazz bona fides, her upright bass being featured more as a lead instrument than in most ensembles. Her arrangement of “Virgo” (from Shorter’s 1964 Blue Note debut album, Night Dreamer) was a highlight of the set, and opened with her whistling the theme while plucking a few notes from her bass. Carrington chimed in with percussion and Allen added some minimalist piano, as if tossing Spalding suggestions via the instrument, the tune developing more slowly than the previous material. Eventually it morphed into Allen quoting Shorter’s perhaps best-known composition, the haunting “Nefertiti” (from the great Davis quintet album of that name, also from 1967). Allen floated some fluffy, billowing chords, Spalding plucking fiercely beneath her. Allen’s playing grew more abstract and weightier as the tune built toward its climax, Carrington creatively churning the beat a la Tony Williams. The trio’s set concluded with Carrington’s arrangement of “Infant Eyes,” from another of Shorter’s stellar early albums for Blue Note, Speak No Evil, which led off with Carrington using mallets and featured Spalding briefly playing her bass unaccompanied.

The Douglas-Lovano quintet, which followed after a short pause for the stage to be reset and the piano retuned, was more obviously hierarchical. Douglas and Lovano manned the front line on trumpet and tenor sax, respectively, and took turns announcing tunes and introducing (and reintroducing) the band, which is rounded out by Lawrence Fields on piano (best known otherwise as a member of Christian Scott’s band), Linda Oh on bass (she’s also in Douglas’ working quintet) and Joey Baron on drums.

Baron, one of the more in-demand and inventive drummers now at large, was playing his kit with his hands early into the group’s first number, “Sound Prints,” the Lovano original for which the ensemble is named. Lovano and Douglas each took strong solos, followed by another from Fields, with Oh anchoring the action with her fleet pizzicato work and the horns eventually kicking back in with some masterful interplay. A similarly brisk reading of Douglas’ “Sprints” followed, and then it was time for a pair of compositions the group had commissioned from Shorter himself, unveiled two months earlier at the Monterey Jazz Festival. Curiously, neither piece (their titles were “Destination Unknown” and “To Sail Beyond the Sunset”) afforded the principals much space to stretch out with their horns. Instead, Douglas and Lovano were confined more to playing written lines than one would expect, and the featured soloist on both pieces was Fields, who rose admirably to the occasion. Oh also took a strong solo on the second commissioned work, and Baron was at his quick-witted best accompanying her, mostly by striking the rims and sides of his assorted drums, the two of them smiling widely at each other as her solo concluded.

Was it Shorter’s little joke to keep the horns on a short leash for the commissioned works? His slyly reducing his risk of being upstaged in Boston? Probably not. After all, two very strong horns were similarly constrained through that classic recording of “Nefertiti” by Davis’ second great quintet, repeating its memorable theme while the rhythm section sizzled inventively beneath them. Shorter doesn’t let others’ expectations dictate how he composes. Whatever his motivation in this case, though, the intense blowing that had characterized Sound Prints in previous appearances seemed tightly rationed here by comparison.

Shorter’s own set followed a slightly longer intermission, and he didn’t do a lot of blowing either. Instead, he let his all-star sidemen-pianist Danilo Pérez, bassist John Patitucci, drummer Brian Blade-do the heavy lifting while he stepped in and out with short, pointed lines on tenor or soprano sax, offered up like a Zen master’s koans. Shorter didn’t seem entirely himself at times: He sat on a stool against the piano for roughly half of the set, shook his left hand repeatedly trying to rid it of some kind of dirt or stickiness picked up from his music stand, and breathed hard after some of his more energetic snatches of playing. That would never have worked for another great octogenarian saxophonist whom Celebrity Series had scheduled for the same venue two months earlier, and indeed Sonny Rollins had canceled that show due to illness. Shorter’s playing is more about picking his spots than sustained stretches of power and invention a la Rollins, and his band mates’ being stars in their primes affords him the luxury of mimicking a shrewd veteran pitcher who has lost some hop from his fastball but still excels on smarts. Or in Shorter’s case, genius.

The quartet, which Shorter assembled in 2000, is widely regarded as jazz’s premiere working combo, its playing free and abstract without the abrasiveness those words can imply. In some ways it builds on the freedoms that second Davis quintet established and loosens things even further, while maintaining beauty and approachability. They led off the Symphony Hall set with another of Shorter’s most recognizable pieces, “Orbits,” which appeared on the Davis quintet album Miles Smiles and which Shorter has recorded twice since with this quartet, on Alegría and this year’s live album Without a Net. Patitucci opened bowing his bass, as he would much of the set, and Pérez played deep, booming chords from his left hand, soon joined by clusters of others with his right. Shorter rose from his stool and blew fragments of the familiar melody on his tenor, Pérez echoing him on piano, Shorter adding some fluttery notes as accents when Pérez took a solo. Blade joyously kept things swirling rhythmically, as he would throughout the set; at one point he woke up the room with a thunderous bang that might have been heard outside on Mass Avenue.

None of the several tunes the band stretched out on was named, though melodic lines of varying familiarity emerged in places. Shorter went back and forth between tenor and soprano, and when he rested his sidemen demonstrated they could be among jazz’s most groundbreaking trios were they so inclined (and not already busy leading their own groups). Their rapport, and their familiarity with Shorter’s musical language, was remarkable. As with Rollins, knowledgeable fans come to the quartet’s performances knowing the music will be strong and hoping it will be transcendent. This night didn’t quite clear the latter bar, and all that freedom on stage proved too much for some. A handful of people left before the set was done, and perhaps a quarter of the audience departed before the encore, which proved a mistake. Shorter was by far his most energized for that final short piece, standing and blowing his soprano powerfully through most of it, his sidemen remaining at full throttle. Judging by that, the master and his late-period quartet still have some transcendence left in them.

Among the many physical, spiritual, and institutional losses related to the still-ongoing pandemic is that of Los Angeles’ renowned Playboy Jazz Festival (PJF) at the … END_OF_DOCUMENT_TOKEN_TO_BE_REPLACED

It’s difficult to imagine what the stage and the audience would have looked like at Gaillard Center in Charleston, South Carolina, if Rhiannon Giddens’ new … END_OF_DOCUMENT_TOKEN_TO_BE_REPLACED

“It’s time to imagine a place where we can come together,” Danilo Pérez said from the hallowed stage of Washington, D.C.’s historic Sixth & I … END_OF_DOCUMENT_TOKEN_TO_BE_REPLACED

At the Zeiders American Dream Theater in Virginia Beach, Va., between April 8 and 10, the Vocal Jazz Summit convened in person for the first … END_OF_DOCUMENT_TOKEN_TO_BE_REPLACED