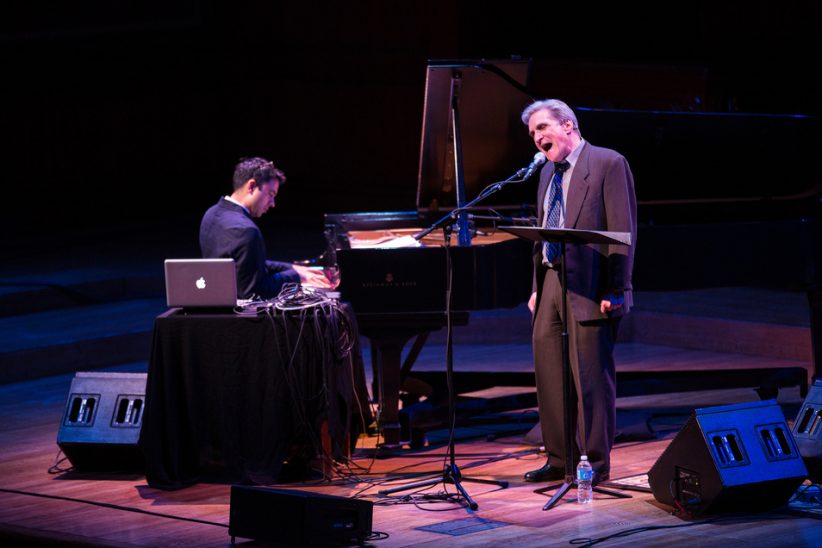 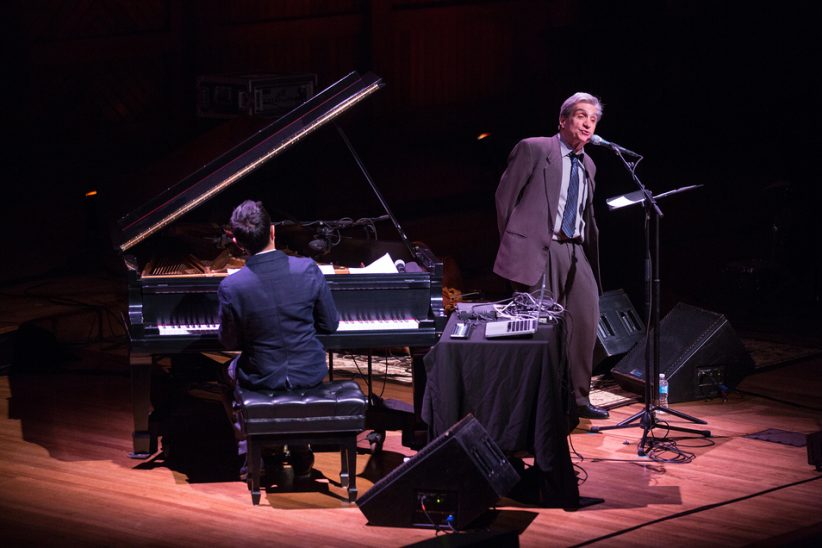 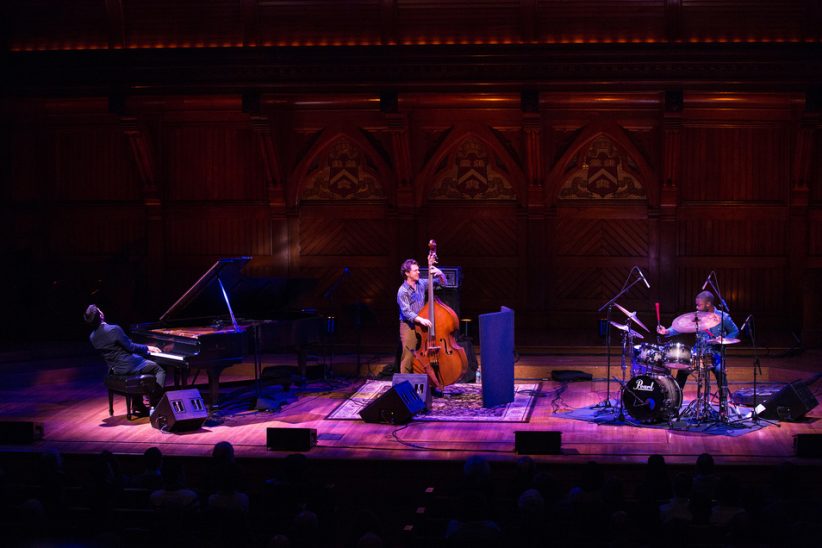 Vijay Iyer’s appointment to the music faculty at Harvard University hadn’t been announced when the Celebrity Series of Boston booked his trio and former U.S. poet laureate Robert Pinsky to perform together at Harvard’s Sanders Theatre. But when the event took place March 14, it doubled as a highly impressive, albeit accidental, welcome-to-town party for Iyer.

The duo of Iyer and Pinsky, who has taught for years across the Charles River at Boston University, opened the festivities. Both men have significant experience coupling poetry with jazz. Pinsky’s PoemJazz project with pianist Laurence Hobgood was released as an album in 2012, and his training as a saxophonist and deep love of jazz fuel the unmistakable musicality of his work. Iyer has collaborated on projects with the late, great Amiri Baraka and the hip-hop artist Mike Ladd, the latter pairing having produced three albums, among them last year’s Holding It Down: The Veterans’ Dreams Project.

They went right to work together, with minimal chit-chat between pieces, looking to pack in as many as possible before Iyer’s trio mates joined him onstage. (“What a pleasant thing it is to not have to yack a lot between songs,” Pinsky said about midway through the seven they did.) Pinsky stood at a microphone in a tie and gray sport coat, moving his legs to the rhythms being produced by Iyer’s piano and the cadences of his own voice; Iyer sat at a grand piano, an Apple laptop to his right, which he occasionally employed for sampled electronic accompaniment. (“You see, this piece is a trio,” joked Pinsky, as the second poem, “Last Robot Song,” opened with a soft computer drone.)

They opened, appropriately enough, with “Horn,” a tribute to Charlie Parker wrapped around an image of Bird taking seriously some chanced-upon ideas of a lesser player. “The master, a Legend, a ‘righteous addict,’ pauses/While walking past a bar, to listen, says: Listen-/Listen what that cat in there is doing. Some figure,/Some hook, breathy honk, sharp nine or weird/Rhythm this one hack journeyman had going./Listen, says the Dante of bop, to what he’s working.”

“Last Robot Song” also referenced music, opening with the lines “It was a little newborn god/ That made the first instrument.” But the rest of the set’s poems-“Antique,” “Takes and Gives,” “The Want Bone,” “The Refinery,” “House Hour”-explored other topics, with Iyer providing sensitive accompaniment throughout. “Takes and Gives” had a film noir-like feel to it, Pinsky shuffling the order of its handful of lines while repeating them in a deadpan tone. “House Hour” was a highlight, Pinsky’s “love song to a lower middle class neighborhood” such as neighboring Somerville.

The trio’s set followed after a short break. Iyer described the enjoyable busyness of his new life at Harvard, which has coincided with Herbie Hancock’s series of lectures at the school. “It’s like the Internet,” he said, “because everywhere you look, there’s something to click on. Before you know it, six weeks have gone by.” He then introduced his longtime bandmates, Stephan Crump on bass and Marcus Gilmore on drums, noting that Gilmore grew up in Queens but has local ties. “Maybe you know his grandfather, whose 89th birthday was yesterday,” Iyer teased before naming him. “The great Roy Haynes.”

Then they got down to work, moving through material drawn from their albums #Historicity# and #Accelerando# as well as new work to be recorded later this year. The paused just once for Iyer to announce tune titles: “Hood” and their cover of Henry Threadgill’s “Little Pocket Size Demons” from #Accelerando#, the ballad “Our Lives” (available with #Historicity as an iTunes bonus track) and “before that a bunch of stuff.” The titles didn’t seem important, though. The fun was in witnessing the group’s distinctive redefinition of the jazz piano trio.

Familiar jazz touchstones were generally absent. No walking bass lines from Crump, no reliance on ride cymbal triplets from Gilmore, or on left-hand chord changes comping right-hand melodic excursions from Iyer. The bluesiest the music got all night had been Iyer’s intro to Pinsky’s reading of “Antique,” and the trio deemphasized soloing as well-though Gilmore had a brilliant extended one late in the set, with Iyer smiling on appreciatively, and Iyer himself played an entire piece solo, Crump and Gilmore remaining onstage as he did so.

Those absences, Crump’s emphatic bow work and the group’s interplay sometimes called to mind a classical chamber ensemble. But the music was intensely improvisational. Rhythm was paramount, and not just owing to Gilmore’s nonstop dynamism. At one point Iyer’s left index finger tapped a repetitive midrange note for the others to maneuver around, his own right hand crossing over his left for a rumbling bass pattern. Twice the trio wowed the crowd by building a groove toward a climax, then stopping abruptly in perfect sync, precision made possible by their decade of playing together. Celebrity Series jazz events tend to lean toward the tried and true, but if this performance was more experimental than most it was also embraceable. The rhythms kept feet tapping and white-haired heads bobbing noticeably throughout the theater.

The highlight of the evening, though, was when Iyer announced that the trio was going to do something it had never done before and brought Pinsky back onstage to join them for one more poem. “These guys do produce some energy, don’t they?” Pinsky asked the audience as he resumed his place at the microphone. “Ginza Samba” was a masterly, narrative-rich history of the invention of the saxophone and the spreading of jazz throughout the world, with references to a pair of African cousins, their ties to the Russian poet Pushkin and “A great Hawk or Bird, with many followers/Among them this great-grandchild Of/the Jewish manager of a Pushkin estate, blowing/His American breath out into the wiggly/Tune uncurling its triplets and sixteenths … .” The musical accompaniment to this was spot on (and the four performers’ varying ethnic backgrounds seemed to serendipitously underline the poem’s intercontinental theme); no one would have guessed this the first time the trio had worked with Pinsky.

One final trio piece followed, and then Iyer grabbed his mike to name his bandmates once and say he wasn’t sure when next they would be back in town. “You’ll see more of me, because I have tenure,” he added playfully. “So it will be hard to get rid of me.”

The 2022 Newport Jazz Festival’s three days of sunshine were bracketed, more or less, by a pair of all-star ensemble jams that included Christian McBride. … END_OF_DOCUMENT_TOKEN_TO_BE_REPLACED

In its first full edition since the onset of the pandemic, and with a new director of programming, the Festival International de Jazz de Montréal … END_OF_DOCUMENT_TOKEN_TO_BE_REPLACED

Among the many physical, spiritual, and institutional losses related to the still-ongoing pandemic is that of Los Angeles’ renowned Playboy Jazz Festival (PJF) at the … END_OF_DOCUMENT_TOKEN_TO_BE_REPLACED

It’s difficult to imagine what the stage and the audience would have looked like at Gaillard Center in Charleston, South Carolina, if Rhiannon Giddens’ new … END_OF_DOCUMENT_TOKEN_TO_BE_REPLACED