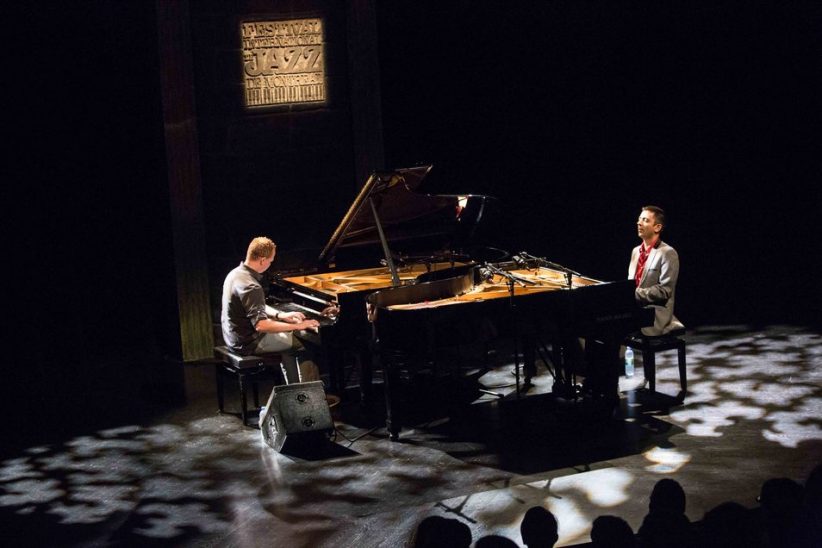 Craig Taborn and Vijay Iyer at the Montreal Jazz Festival, 2013

Vijay Iyer performed three shows as part of the prestigious Invitation Series at the 2013 Montreal International Jazz Festival. The pianist opened his run in a trio setting, with drummer Justin Brown and bassist Stephan Crump by his side, and then closed with a solo show. Sandwiched in between was arguably the most intriguing offering, a duo performance with fellow pianist Craig Taborn.

The outing, which took place July 5 at the festival’s intimate Gesu Center, definitely lived up to its vast potential, with the two young masters combining talents in curious, yet complementary ways. There are many reasons why we don’t see more jazz piano duo shows. One is simple practicality, since many venues don’t have two pianos on site. Just as significant, however, is that 176 keys can be a lot for some listeners to take, especially if the two players don’t have much of a game plan for how they intend to trade leads. Then there’s the matter of whether the individual styles make for a suitable match. Partnerships should be entered into with a degree of caution, even if both of the candidates are accomplished players in their own right.

Iyer and Taborn, two players in their early 40s, were definitely a match made in jazz heaven. They never spoke during their 70-minute main set, yet they showed an amazing level of communication as they ran through one adventurous number after another. They kept the crowd guessing throughout the set list, motoring through a variety of tunes that spanned the gamut of modern jazz styles. The pair opened with a softly percussive piece that stretched nearly 20 minutes, displaying a kind of synergy that seemed to grow more potent as each minute clicked on the clock.

The opener was a marathon, run at a trot, which seemed to leave the crowd a bit winded and, perhaps, bewildered. It was a barrage of notes that never resulted in any discernible melody. Showing excellent judgment, the duo went in a different direction with the second tune, which was a short, yet muscular offering that ran just three minutes or so.

Trading pianos after the third number, Iyer and Taborn got right back to business, conjuring up more magic from the keys in a decidedly avant-garde fashion. Although Iyer’s name came first on the marquee, there was no real star of the show. The two players volleyed short leads countless times, delivering the musical equivalent of a tennis match.

It was intentionally disorienting at times, with the only real break coming on the few occasions when one player (Iyer, usually) would briefly agree to comp the other.

Among the many physical, spiritual, and institutional losses related to the still-ongoing pandemic is that of Los Angeles’ renowned Playboy Jazz Festival (PJF) at the … END_OF_DOCUMENT_TOKEN_TO_BE_REPLACED

It’s difficult to imagine what the stage and the audience would have looked like at Gaillard Center in Charleston, South Carolina, if Rhiannon Giddens’ new … END_OF_DOCUMENT_TOKEN_TO_BE_REPLACED

“It’s time to imagine a place where we can come together,” Danilo Pérez said from the hallowed stage of Washington, D.C.’s historic Sixth & I … END_OF_DOCUMENT_TOKEN_TO_BE_REPLACED

At the Zeiders American Dream Theater in Virginia Beach, Va., between April 8 and 10, the Vocal Jazz Summit convened in person for the first … END_OF_DOCUMENT_TOKEN_TO_BE_REPLACED