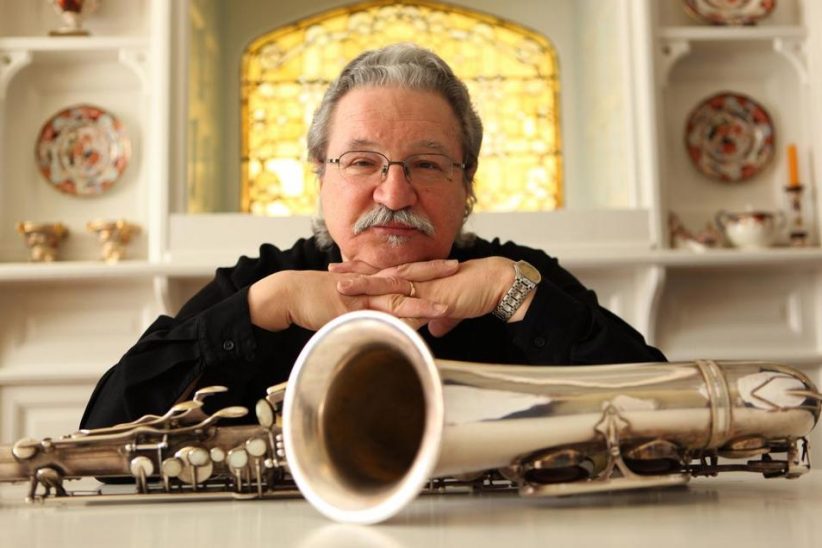 Notwithstanding the essential role that records and CDs play in the documenting of an artist’s or ensemble’s work; or in the writing of jazz history; or the private pleasures they bring listeners and collectors; or the programming of radio shows, there’s nothing quite liking hearing musicians in person. I could cite numerous examples of singers and players whose work I’ve come to appreciate more from seeing them in performance than on record-in a few cases, even, artists I enjoy hearing in person never really do it for me on record.

The latter does not apply to tenor saxophonist Ralph Lalama, whose recorded work over the past 20 years has been a staple of [my radio program] Jazz a la Mode. Lalama has made several great records for Criss Cross Jazz, a critically acclaimed pair for Mighty Quinn, and his recent release, BopJuice: Live at Smalls, is fabulous. And while I’d seen Lalama a few times over the years with the Mel Lewis Orchestra and its successor, the Vanguard Jazz Orchestra, it’s only been in the past two years that I’ve seen him in the kind of small-group setting that most effectively showcases his great playing and charismatic style on the bandstand.

Thanks to the Northampton [Mass.] Jazz Workshop, which has booked them twice, Ralph and his wife, the fine vocalist Nicole Pasternak, have appeared locally at Green Street Café and the Clarion Hotel. Lalama also appears regularly at Smalls Jazz Club in new York, and in addition to playing for fans who pack the basement nightclub at 183 West 10th Street to see him in person, subscribers to the Smalls video stream can see him anywhere they happen to be on the internet. (Nicole, by the way, is traveling to Hartford on the first Monday of every month to sing with the Hartford Jazz Orchestra at Arch Street Tavern. She’s a worthy successor to the recently deceased Bobbi Rogers, who sang with the HJO for decades.)

I was in the city earlier this month for the Jazz Connect Conference, and while there Ralph’s BopJuice trio was at Smalls. Conference-goers deliberated over a variety of jazz options on January 11, but the matter was settled for me as soon as I saw the lineup at Smalls, and I took in both sets Lalama played that evening. (In what is standard operating procedure at Smalls, a $25 cover charge brought me, on this particular night, not only two sets by BopJuice, but two sets by Greg Hutchinson’s quintet featuring Aaron Goldberg, Stacy Dillard, Ron Blake and Joe Sanders, and an early morning show by pianist Anthony Wonsey.)

BopJuice includes drummer Clifford Barbaro, and Mike Karn was there playing bass on the 11th. Tenor, bass and drum configurations inevitably bring to mind the great Sonny Rollins trios of the late ’50s, the period when Rollins eschewed a chordal instrument and made such magnificent music with Wilbur Ware and Elvin Jones; Ray Brown and Shelly Manne; Henry Grimes and Pete LaRoca. Lalama is cut from a similar mold as Rollins: robust tone; strong beat; melodic inventiveness on jazz and popular standards; all suspended on a harmonic tightrope.

With Karn and Barbaro, he played such gems as “Lester Left Town” by Wayne Shorter; “Take the Coltrane” by Duke Ellington; Ralph’s original bossa, “Nonchalant”; and three standards that were launching pads for Rollins in his prime: “Wonderful Wonderful”; “Will You Still Be Mine”; and Johnny Mercer’s “I’m an Old Cowhand,” a comic cowboy song written for Bing Crosby that Rollins retooled as a jazz vehicle on Way Out West. Lalama referred to it only as “the dumbest song ever written,” and he rode it hard.

Lalama was born into a musical family in Aliquippa, Pa., 62 years ago. He attributes his love for tunes that precede the rock ‘n’ roll era to what he imagines hearing even before his birth. He told R.J. DeLuke at All About Jazz that his mother was a professional singer who performed until she was eight months pregnant with him. “I was in her womb hearing these tunes live on the stage. I was hearing that vibration. It happened naturally…the…Songbook…is in my blood.”

While Lalama excels in the trio and quartet settings that he’s recorded in over the past 20 years, he’s spent his entire career affiliated with big bands. When he was a student at Youngstown State University in Ohio, Thad Jones heard him and encouraged him to come to New York. Once he arrived, Lalama worked occasionally with Thad and Mel Lewis in a quintet, and occasionally subbed for one of the tenors in their band, either Frank Foster or Gregory Herbert. He went on the road with Woody Herman in 1976, and paid dues and “learned to be cool” working with the hot-tempered Buddy Rich. By 1983, when he joined the Mel Lewis Orchestra, the illustrious saxophone section boasted Ted Nash, Dick Oatts, Joe Lovano and Gary Smulyan. Lalama’s stayed on through the years, which means that for the past 30, he’s worked at the Village Vanguard virtually every Monday night.

I can only wish for Ralph many happy and healthy years to come.

Among the many physical, spiritual, and institutional losses related to the still-ongoing pandemic is that of Los Angeles’ renowned Playboy Jazz Festival (PJF) at the … END_OF_DOCUMENT_TOKEN_TO_BE_REPLACED

It’s difficult to imagine what the stage and the audience would have looked like at Gaillard Center in Charleston, South Carolina, if Rhiannon Giddens’ new … END_OF_DOCUMENT_TOKEN_TO_BE_REPLACED

“It’s time to imagine a place where we can come together,” Danilo Pérez said from the hallowed stage of Washington, D.C.’s historic Sixth & I … END_OF_DOCUMENT_TOKEN_TO_BE_REPLACED

At the Zeiders American Dream Theater in Virginia Beach, Va., between April 8 and 10, the Vocal Jazz Summit convened in person for the first … END_OF_DOCUMENT_TOKEN_TO_BE_REPLACED