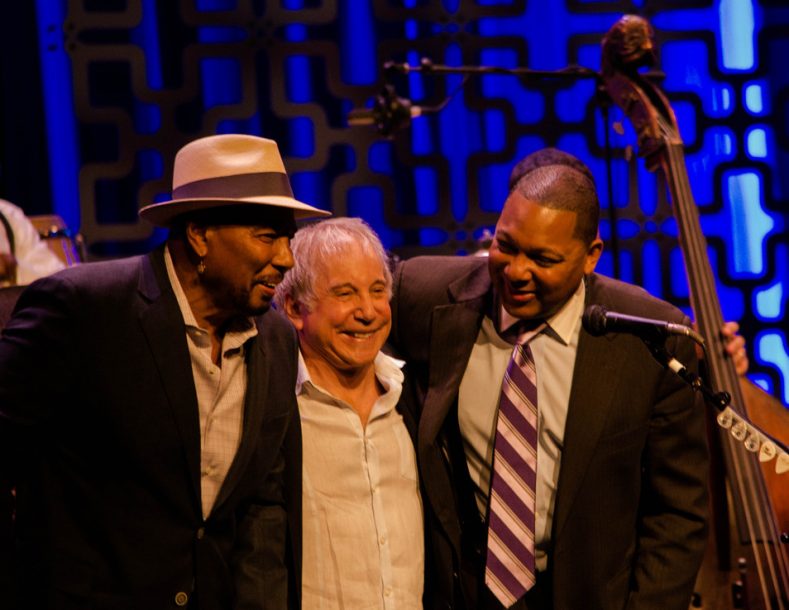 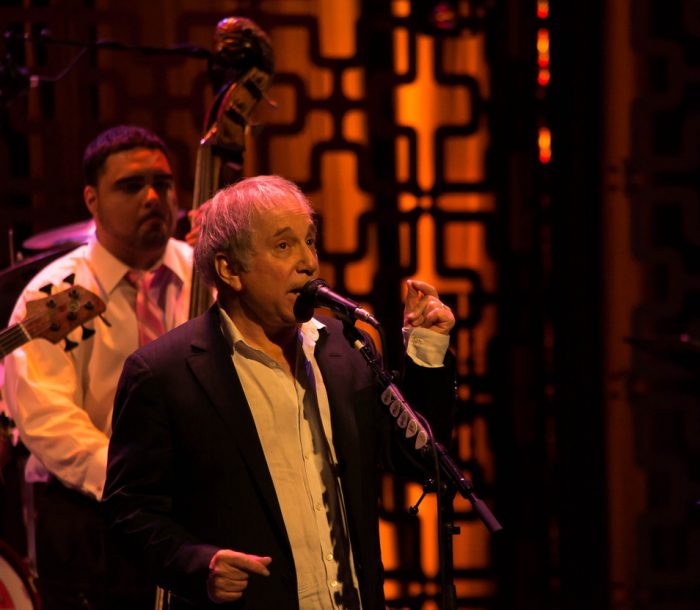 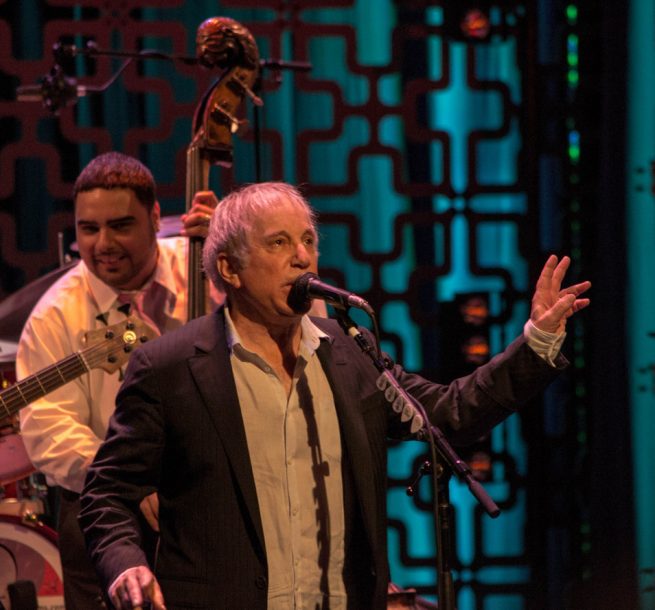 For all of their stylistic differences-one’s a virtuosic jazz purist, the other a gifted singer-songwriter-Paul Simon and Wynton Marsalis had no trouble transcending category and finding common ground in the second of three joint performances at Jazz at Lincoln Center. For Marsalis, reaching beyond the jazz wall has long been a favorite pastime: In 2007, he collaborated at JALC with the country/roots singer Willie Nelson and early last year he teamed with blues-rock guitar legend Eric Clapton (both of those shows were released on CD and DVD; the Simon shows were, not visibly anyway, apparently not recorded or filmed). Marsalis has also bonded artistically with classical orchestras, dance troupes and the Ghanaian percussionist Yacub Addy.

Simon, for his part, has always been a curious and resourceful musician. As far back as his Simon and Garfunkel days in the ’60s, he brought in players from outside cultures to spice up arrangements, and since the ’80s, he’s made a habit of mixing it up: the iconic Graceland (1986) featured South African musicians and singers, and on 1990’s The Rhythm of the Saints, he utilized Brazilian, zydeco, Afro-Cuban and jazz musicians to help realize his compositions.

Simon had plenty of assistance bringing his songs to glorious fruition at JALC as well: His band and the Marsalis-led Jazz at Lincoln Center Orchestra commandeered the stage simultaneously, numbering more than 20 in all. A battery of horn men, percussionists, keyboardists and guitarists provided a wide range of melodic coloring and rhythmic pulse as Simon ran through a career-spanning setlist of 15 tunes, many expanded for the occasion and all but one-the old New Orleans R&B staple, “Rockin’ Pneumonia and the Boogie Woogie Flu,” sung here by guest Aaron Neville-from his own canon.

The show got off to a tentative start. For roughly half of the opener, Graceland‘s “Diamonds on the Soles of Her Shoes,” the orchestra and Simon’s crew didn’t quite mesh: once the acappella lead-in gave way to a polyrhythmic feast of rhythms and sounds, the beats were slightly off, the two bands not quite finding their groove together. But that issue was quickly resolved and from then on the ensembles played as one. African-rooted guitar lines gave way to tenor and alto sax and trumpet and trombone solos-the expanded orchestra slipped seamlessly from jazz motifs to solid soul, New Orleans met Havana met Harlem, and lyrics written for a contemporary listenership found new homes in arrangements that suggested Ellington or Armstrong as often as they did rock and roll.

If there was any skepticism regarding the pairing of Paul Simon and the Marsalis outfit, the singer laid it to rest quickly and definitively. His phrasing is that of a studied jazz singer, nuanced and full of surprising turns. For all of the careful plotting his songs inhabit, Simon is an improviser at heart. On an easy-rolling “Slip Slidin’ Away” and, later, “Kodachrome,” both from his early solo career, he sang ahead of the beat and behind it but never lost track of it; his careful diction made each word count, and he cut the players all of the slack they needed. He seemed loose up there, but never was there any doubt that he was in complete control of the proceedings at any given moment.

Remarkably, Simon’s voice hasn’t changed a bit since he first became a star in his twenties; there’s none of the gruffness that often comes with age, but although his voice is a youthful one, he’s grown into it-it fits the intimate nature of his words even more comfortably than when he wrote these songs. He’s one of those artists who makes it all look so effortless, although it’s obvious just how much work he puts into every aspect of his work.

And those songs! Although, with a few exceptions, he largely avoided the big hits in favor of deep album tracks that lent themselves to the format, there wasn’t a clunker in the bunch. “Crazy Love,” another Graceland track, positively rocked, its pounding 4/4 inspiring handclaps from Simon and some of the others, particularly as Marsalis and the other trumpeters blew in tandem. Arranged for this show by JLCO alto saxophonist Ted Nash (each song played was arranged by a JLCO member), it sported sophisticated harmonics and ample soloing from the horn section. “That Was Your Mother,” yet another from Graceland, was originally housed in a Louisianan framework that naturally felt right at home in the hands of Marsalis and crew-zydeco became late-’40s boogie woogie by the time they were done with it, and a beaming Simon couldn’t help but strum an invisible washboard as his band member Mick Rossi took an accordion solo.

Solos in general were brief but plentiful, and Marsalis didn’t get special treatment, despite being co-billed with Simon. He ventured up from his seat in the rear of the horn section only once during the program (for a stunning voice-trumpet duet with Simon on “The Sound of Silence” that reduced the audience to appropriate pin-drop silence), and soloed economically and sporadically when it was his turn. He rarely spoke either (neither did Simon, for that matter), breaking his silence only to praise Simon for the “depth of love” he gave to the project and thanking him for donating his services to the JALC cause (which prompted Simon to deadpan, “This is the first I’m hearing about the no money.”).

It would have been more than enough to enjoy the Simon-Marsalis merger for 90 minutes but there was another treat to be savored: New Orleans great Aaron Neville’s all-too-brief guest segment. Arriving for a NOLA brass-band reworking of “Take Me to the Mardi Gras,” from 1973’s There Goes Rhymin’ Simon, Neville provided falsetto harmonies before taking a lead vocal on the aforementioned Huey “Piano” Smith and the Clowns chestnut “Rockin’ Pneumonia and the Boogie Woogie Flu.” But Neville’s showstopper was yet to come: an interpretation of “Bridge Over Troubled Water” that ranked alongside the Art Garfunkel-sung original for sheer exquisiteness. At first minimal and funereal, cello and bass providing the melody, the arrangement flowered steadily, taking on a more urbane, uptown sheen until it broke out as a full-blown big band extravaganza, mirroring the original recording’s grandness. Neville’s quavering voice was a perfect fit; he recorded it for his 2000 album Devotion, and his version is worth seeking out.

Among the other highlights: “Further to Fly,” from The Rhythm of the Saints, here rendered as a conga-heavy, flute-accented tropical jam that caused Simon to dance in place; a similarly Latinized “Late in the Evening,” spotlighting the percussionists; the soulful punch of the horns in the “slip out the back, Jack” chorus of “50 Ways to Leave Your Lover”; and the set-closing “The Boxer,” the Simon and Garfunkel classic, which was given a full-bodied treatment that featured a verbatim recreation of the original’s horn break. An encore of “You Can Call Me Al” signaled party time, the JALC audience finally roused from its seats to shake and shimmy.

Like Marsalis’ prior side trips with Nelson and Clapton, the Simon dates are not intended to be anything but a one-time-only event. That’s too bad-one can only imagine just how creative this particular collective could get if given the luxury of a full tour to build upon what they managed to come up with at JALC after only three days of rehearsals.

Among the many physical, spiritual, and institutional losses related to the still-ongoing pandemic is that of Los Angeles’ renowned Playboy Jazz Festival (PJF) at the … END_OF_DOCUMENT_TOKEN_TO_BE_REPLACED

It’s difficult to imagine what the stage and the audience would have looked like at Gaillard Center in Charleston, South Carolina, if Rhiannon Giddens’ new … END_OF_DOCUMENT_TOKEN_TO_BE_REPLACED

“It’s time to imagine a place where we can come together,” Danilo Pérez said from the hallowed stage of Washington, D.C.’s historic Sixth & I … END_OF_DOCUMENT_TOKEN_TO_BE_REPLACED

At the Zeiders American Dream Theater in Virginia Beach, Va., between April 8 and 10, the Vocal Jazz Summit convened in person for the first … END_OF_DOCUMENT_TOKEN_TO_BE_REPLACED