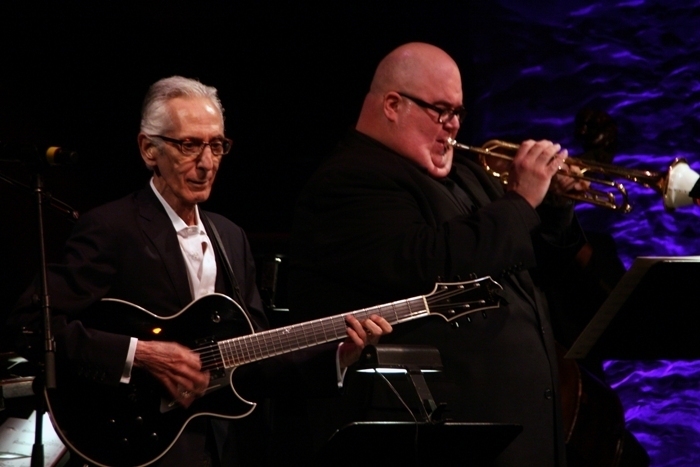 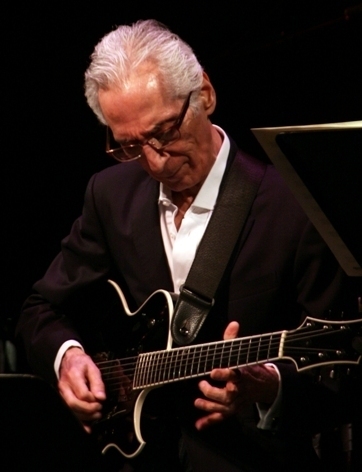 Guitarist Pat Martino quickly set the tone with a blistering revisit of the boppish “Lean Years” at his concert Feb. 4 with the Naples Philharmonic Jazz Orchestra. “Lean Years,” which first appeared on Martino’s 1967 Prestige album Strings!, remains one of his signature tunes.

The program also included two other Martino originals (“Inside Out” and 1974’s “On the Stairs”), and a half-dozen covers of jazz standards that the Philadelphia native has recorded over the years. Those included Dave Brubeck’s beautiful ballad “In Your Own Sweet Way,” John Coltrane’s “Impressions” and the Charlie Christian-Benny Goodman burner “Seven Come Eleven.”

There were two favorite moments:

A co-feature in which Martino and Basham, whose “day job” is concertmaster of the Naples Philharmonic, turned Wayne Shorter’s “Footprints” into a melodic conversation.

The evening showcased Martino’s blazing technique, his swinging pulse and the deep, dark sound he gets from his guitar, ingredients that have been part of his distinct sound since he burst on the scene in the early 1960s.

Every audience that hears Martino ought to be thankful they’ve had the opportunity. In 1980, he underwent emergency neurosurgery to repair a congenital brain aneurysm. He then had to relearn the guitar and his style by studying his vintage recordings. After a 15-year near-absence from recording and performing, he was back on the scene in the mid-1990s.

Martino, now 70, has a keen outlook about how the experience changed him. “The guitar is of no great importance to me,” he says. “The people it brings to me are what matter. They are what I’m extremely grateful for, because they are alive. The guitar is just an apparatus.”

In a recent Facebook posting, trumpeter Miller called Martino “an inspiration both musically and personally. Not only is he a great artist who lifts the bandstand with his genius, but spiritually he emboldens you to live in the moment and embrace the now. An unforgettable day of music and discussion.”

Each month during the concert season, the band brings in a special guest. Next up are tenor saxophonist Jimmy Heath on March 4 and trumpeter Jon Faddis on April 1.

For years, the Pittsburgh International Jazz Festival (PIJF) took place on the street. Over one weekend in June, Downtown thoroughfares Penn Avenue or Liberty Avenue … END_OF_DOCUMENT_TOKEN_TO_BE_REPLACED

The mood was understandably festive as John Fedchock’s New York Big Band took to the stage at Birdland on Sunday, September 18. Not only was … END_OF_DOCUMENT_TOKEN_TO_BE_REPLACED

Considering the lineup—stacked with talent—and the musician to whom they were paying their respects—a cult figure, rightly or wrongly—the New York City live tribute to … END_OF_DOCUMENT_TOKEN_TO_BE_REPLACED