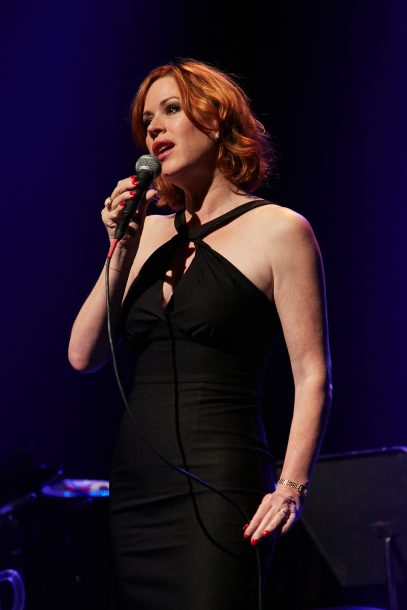 Whatever happened to Molly Ringwald? The once-celebrated actress is not working on The Breakfast Club II, Still Pretty in Pink or any other film that might appeal to aging fans of the old “Brat Pack” bunch. Instead, she’s singing jazz standards-very convincingly. And she’s even hawking a new CD-even more convincingly.

“We are going to play a little game,” she told the crowd assembled for her July 6 show at the Montreal International Jazz Festival. “This is called, ‘How many times does Molly hold up her CD?'” For the record, she held it up plenty, at least a half dozen times, as she pitched the debut, Except … Sometimes, with all the subtlety of a late-night infomercial. But, wait, there’s more-did she mention that she’d sign copies of the CDs for fans after the gig? Why, yes, she did.

The greatest sales pitch, however, came in musical form. Ringwald thrilled fans-many of whom probably didn’t know what to expect from the show-with a solid 16-song, two-set performance that drew almost entirely from the Great American Songbook. The 45-year-old native Californian hardly came across like a rookie during this show. Her technique was at least as strong as her voice, and she handled both ballads and uptempo tracks with confidence and apparent ease. Jazz, as she explained to the crowd, is in her DNA, since she’s the daughter of accomplished jazz pianist and bandleader Bob Ringwald.

She filled the set with a goodly number of aching love songs, which seemed particularly appropriate given the date on the calendar. “Today is my wedding anniversary,” she explained to the crowd, right before launching into the classic “I’ll Take Romance.” “And I’m spending it with you, not my husband.”

Her hubby’s loss was certainly our gain, as Ringwald continued through bewitching versions of such classics as “You Fascinate Me,” “It Never Entered My Mind” and “The Very Thought of You.” (See below for a complete set list of the show.) Plus, we couldn’t have hoped for better accompaniment: Peter Smith (who co-produced the album with Ringwald) on piano, Trevor Ware on bass and the always-amazing Clayton Cameron on drums.

She had a nice trick up her sleeve-even though she was wearing a sleeveless cocktail dress- saved for the finale. She brought a rush of memories to the crowd as she covered Simple Minds’ Breakfast Club anthem “Don’t You (Forget About Me),” which was indeed a memorable way to bring the set to a close.

3. I Get Along Without You Very Well (Except Sometimes)

3. It Never Entered My Mind

5. The Very Thought of You

6. Ballad of the Sad Young Men

It’s difficult to imagine what the stage and the audience would have looked like at Gaillard Center in Charleston, South Carolina, if Rhiannon Giddens’ new … END_OF_DOCUMENT_TOKEN_TO_BE_REPLACED

“It’s time to imagine a place where we can come together,” Danilo Pérez said from the hallowed stage of Washington, D.C.’s historic Sixth & I … END_OF_DOCUMENT_TOKEN_TO_BE_REPLACED

At the Zeiders American Dream Theater in Virginia Beach, Va., between April 8 and 10, the Vocal Jazz Summit convened in person for the first … END_OF_DOCUMENT_TOKEN_TO_BE_REPLACED

The Big Ears Festival returned to Knoxville in a big way in late March, drawing an estimated 30,000 music enthusiasts from across the U.S. and … END_OF_DOCUMENT_TOKEN_TO_BE_REPLACED