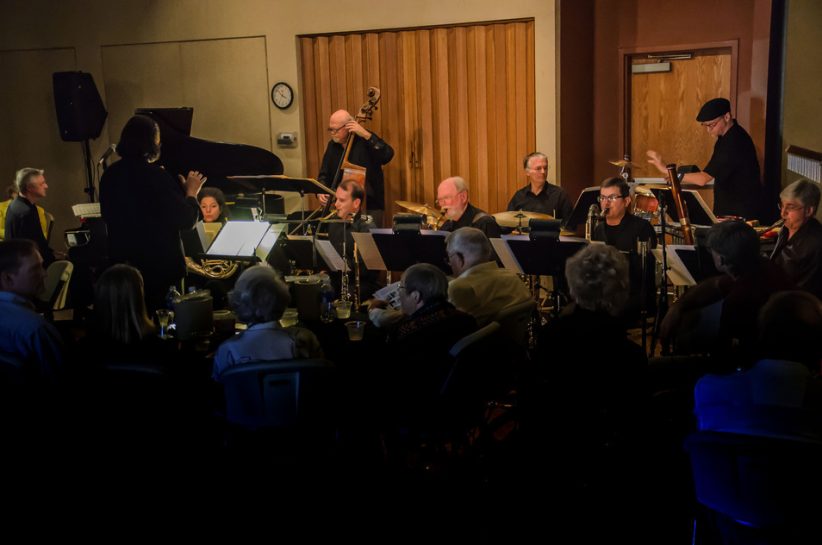 Back in the day, Palm Springs, Calif., was known for the Racquet Club, where, legend has it, Marilyn Monroe was discovered, and for the Biltmore Hotel, where the Rat Pack hung out. Nowadays, it is known for the world’s densest concentration of golf courses (124 at last count) and for geriatric affluence. Suntanned geezers slowly drive their Aston Martin cabriolets up and down Highway 111, which links Palm Springs to even more upscale communities of the Coachella Valley like Rancho Mirage, Palm Desert and Indian Wells.

One thing the Palm Springs area is not known for is jazz. But a surprising amount of real jazz is available in the Valley, primarily because of the American Jazz Institute. Since 1997, AJI has sponsored clinics, mentoring programs and an Internet radio site (AmJazzIn). It maintains an extensive jazz archive at its office in Palm Desert, and presents three concert series each year. One venue is a restaurant in Indian Wells, Vicky’s of Santa Fe, where singers like Jackie Ryan and Mary Stallings appear. The other two venues are unusual but workable. Concerts are held in Pete Carlson’s Golf & Tennis store in Palm Desert. People on the level of Peter Erskine, Gary Smulyan and Tim Hagans have played Pete’s, wailing amid displays of irons, woods and racquets. The other venue is a large room adjacent to an aviary (currently presenting “Birds of the Australian Outback”) on the grounds of the Living Desert, a beautiful zoo and botanical garden in Palm Desert. On Sunday, February 9, the Mark Masters Ensemble performed the music of Antonio Carlos Jobim. It was the fourth of six events in this year’s “Jazzoo” concert series.

Masters is the president of AJI. He is also one of the most astute and prolific arrangers in jazz. Many of the concerts sponsored by AJI present Masters conducting expanded ensembles. He has released a diverse portfolio of albums on the Capri label, but he also takes on ambitious projects that may never get recorded, like his Jobim concert. Masters is able to populate his bands with first-tier players from Los Angeles, which is only two hours to the west, out Interstate 10. (Palm Springs became popular with movie stars because of the “two hour rule,” which, contractually, prohibited them from venturing more than two hours from Hollywood while a film was being shot.)

As an arranger Masters is drawn to atypical concepts. He has an Ellington album that features compositions, not by Duke and Strayhorn, but by Duke’s saxophone players. (He also did a recital last December of pieces by Ellington’s brass players.) His curiosity has led him to repertoire as different as Dewey Redman’s and Steely Dan’s. (Both of those projects were recorded for Capri.) Even when he goes to more conventional sources for his material, he finds unexpected slants on it. His afternoon of Jobim contained mostly obscure pieces. Masters confessed that he “did not know most of these songs existed” until he began doing the research for this concert.

It began with “Come for a Dream.” The sinuous unwinding line was only unfamiliar through the first chorus. Then it began to sound inevitable, like a melody that had always been there, as natural as a Corcovado shore breeze. Jobim songs are like that. They feel like they were always present in your subconscious until Jobim brought them to the surface.

This opening piece established Masters’ chosen rules of engagement. The freshness of his Jobim vision derived from repertoire but also from instrumentation. His nonet contained four woodwind musicians who all played alto flute in addition to the standard saxophones, and who also played English horn (Joe Stone), bass clarinet (Brian Williams) and bassoon (Allen Savedoff). At one end of this row sat French horn player Stephanie O’Keefe. Behind them, percussionist Brad Dutz also had a vibraphone at his disposal. “Come for a Dream” introduced the haunting, seductive sonorities made possible by this extravagance of instruments, and also revealed Masters’ skill in manipulating the shades of his color palette. First carried by three alto flutes and bassoon, the song floated, lighter than air. Then Gary Foster’s alto saxophone solo transformed the melody into light. Foster was the featured soloist in Masters’ band. His saxophone sound is so clear and pure it is like a direct emanation of spirit. (Foster has been making major contributions to West Coast jazz ensembles since 1963, when he played on Clare Fischer’s masterwork Extension, recently reissued on the International Phonograph label.)

Masters found most of the material in a Jobim songbook from the ’60’s. There were traditional lead sheets with melodies and chord progressions. Masters then reimagined the songs as large, intricate designs, as multitudes of discrete elements arrayed across nine voices. On “It Was Night,” O’Keefe’s French horn, deeply blended with four flutes, murmured the pensive theme, which was then passed through Brad Dutz’ vibraphone to Ed Czach’s piano to the saxophones that the flute players had taken up. Every time the melody moved it changed colors.

Masters made some striking discoveries in that songbook. “I Always Knew” is as rapt and spellbinding as anything Jobim ever wrote. The nonet played it straight through, in a one-chorus arrangement without solos, definitive and complete. “If You Never Come to Me” was another melody from somewhere in your dreams, portrayed in rich, complex colors of English horn, flute, bassoon and bass clarinet, shadowed by whispered counterlines. “Hope Lost” was more wistful than sad, and contained another flowing Foster solo like thought become breath.

Jobim’s elegant, graceful music suits Masters’ strengths as an arranger, which are his light touch, his clarity and his instinct for meaningful subtle detail. He told the audience that, as a reward for their attention, he would let his pianist, Ed Czach, play something they knew. Everyone could tell what was coming, but when Czach and the rhythm section bounced into it, the crowd whooped with delight anyway. On this 80-degree sunny Sunday in February, the only thing missing was a shore for the girl from Ipanema to walk on. Actually, there is a lot of beach in Palm Desert. Just no ocean.

The 2022 Newport Jazz Festival’s three days of sunshine were bracketed, more or less, by a pair of all-star ensemble jams that included Christian McBride. … END_OF_DOCUMENT_TOKEN_TO_BE_REPLACED

In its first full edition since the onset of the pandemic, and with a new director of programming, the Festival International de Jazz de Montréal … END_OF_DOCUMENT_TOKEN_TO_BE_REPLACED

Among the many physical, spiritual, and institutional losses related to the still-ongoing pandemic is that of Los Angeles’ renowned Playboy Jazz Festival (PJF) at the … END_OF_DOCUMENT_TOKEN_TO_BE_REPLACED

It’s difficult to imagine what the stage and the audience would have looked like at Gaillard Center in Charleston, South Carolina, if Rhiannon Giddens’ new … END_OF_DOCUMENT_TOKEN_TO_BE_REPLACED