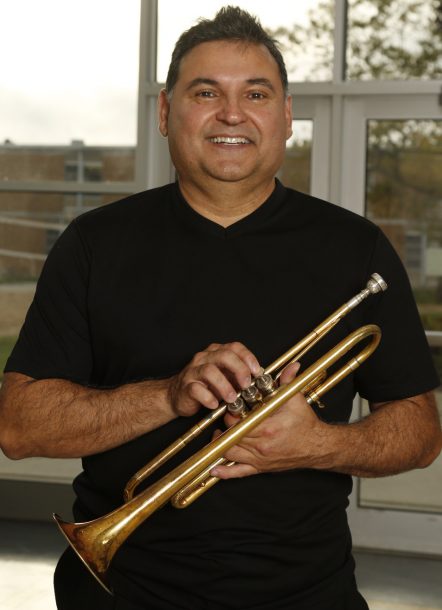 Let the jazz fit the room. A recent Saturday night in Thiensville, Wisc., saw Lou Menchaca’s quartet assembled in a tiny corner of the Cheel, a small restaurant that specializes in Nepalese fare. Well prepared for the gig, tenor saxophonist Albert Abena set aside his large horn in favor of flute and clarinet. The leader’s trumpet was traded for the softer sound of his flugelhorn, while an acoustic bass provided rhythm. Only the Roland piano required a power source, but this was certainly not the only electricity present within the group.

Using this impromptu stripped-down instrumentation, gentle music filled the room for late evening diners. It served as background ambience for those who chose to talk. But for the ones who came to listen, the quartet consistently provided rich rewards, as recognizable tunes and excellent solos filled several outstanding sets.

Benny Golson’s “Killer Joe” opened the night, with each player checking the atmosphere in the room. Satisfied that actual jazz would not only be tolerated but encouraged, Menchaca then led his group through what became a Miles Davis tribute set. Fine renditions of “My Funny Valentine,” “Freddie Freeloader” and “On Green Dolphin Street” were played. The leader was generous with the solo space for his other players, but he never allowed the tunes to get cumbersomely long or the solos self-indulgent.

Because of a chamber jazz approach to the instrumentation, the mix was good and each instrument could be clearly heard. Although Theo Merriweather’s keyboard was electric, it had the sound of an acoustic piano, fitting the tone of the other instruments. Clean and precise lines were heard all night from the bass of Tom McGirr, both as he offered rhythmic support and when embarking on an occasional solo.

The clarinetist took a few well-considered solos, but equally impressive were the tight harmony lines that Abena played with Menchaca’s flugelhorn during the heads of several pieces. The reed player’s less frequently heard flute also brought a fresh dimension to the music. I would like to hear this same band on a night when Abena is blowing his tenor, but in this intimate setting the clarinet did not seem like a replacement, but rather a logical instrument of choice.

The leader himself always knew right where the most interesting notes in a chord were hidden. Menchaca’s horn solos brought new life to these standards, reminding the listener why they are so durable in the first place. In addition to the Miles book, other selections included Stanley Turrentine’s “Sugar” and the standard “You Stepped Out of a Dream.”

The band, like the room itself, was calm; tempos remained relaxed. Menchaca allowed a great amount of freedom in this atmosphere, and sometimes tradition was laid aside. One of the players occasionally took a second solo on a tune, perhaps thinking of something he had forgotten to say in his first break, or maybe wanting to comment musically on a colleague’s previous solo.

If the first rule of public performance is to know the room and its audience, Lou Menchaca and his Jazz Express succeeded beautifully. The quartet did an excellent job of presenting high quality jazz to this sometimes attentive audience.

The 2022 Newport Jazz Festival’s three days of sunshine were bracketed, more or less, by a pair of all-star ensemble jams that included Christian McBride. … END_OF_DOCUMENT_TOKEN_TO_BE_REPLACED

In its first full edition since the onset of the pandemic, and with a new director of programming, the Festival International de Jazz de Montréal … END_OF_DOCUMENT_TOKEN_TO_BE_REPLACED

Among the many physical, spiritual, and institutional losses related to the still-ongoing pandemic is that of Los Angeles’ renowned Playboy Jazz Festival (PJF) at the … END_OF_DOCUMENT_TOKEN_TO_BE_REPLACED

It’s difficult to imagine what the stage and the audience would have looked like at Gaillard Center in Charleston, South Carolina, if Rhiannon Giddens’ new … END_OF_DOCUMENT_TOKEN_TO_BE_REPLACED