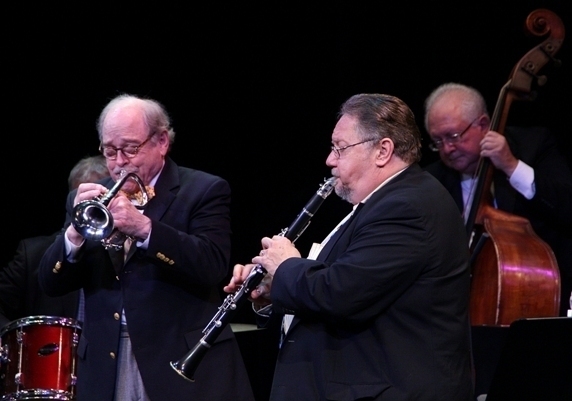 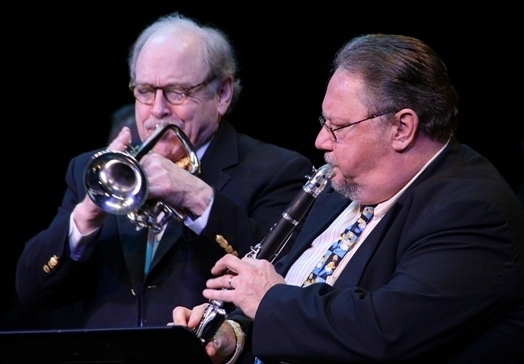 The Jim Cullum Jazz Band in concert in Sarasota, Florida, 3/14 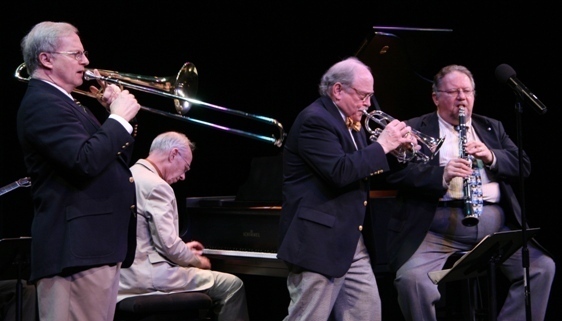 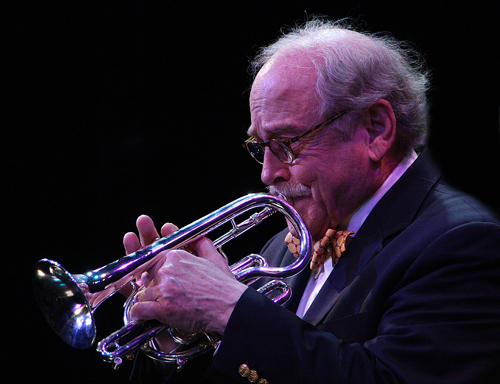 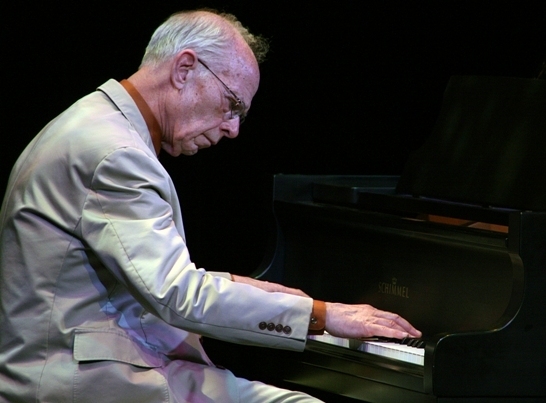 The Jim Cullum Jazz Band’s performance in Sarasota, Fla., on March 15, and a concert the prior night in Ft. Lauderdale, turned out to be a reunion performance with two longstanding members of the traditional jazz septet.

Clarinetist Allan Vaché spent 18 years in the San Antonio-based band before moving to the Orlando area 22 years ago. Bassist Don Mopsick was with the Cullum outfit for 19 years before concluding that tenure in 2009 and moving to southwest Florida. The band also included veteran members John Sheridan on piano, Mike Pittsley on trombone, Kevin Hess on drums (who began working with the band several nights a week at age 14), and relative newcomer Clint Baker on rhythm guitar

Cullum and company filled the 200-plus-seat Glenridge Performing Arts Center in Sarasota, where the audience included pianist Dick Hyman, who lives in nearby Venice and has been a guest artist with the band many times.

The evening’s repertoire ranged from Jelly Roll Morton and Bix Beiderbecke to Benny Carter and George Gershwin, material that was jazz standard fare before 1940. Shining moments: Sheridan’s solo piano feature on Beiderbecke’s “In A Mist,” Vaché’s spotlight on Gershwin’s “The Man I Love,” the band’s playful romp through Carter’s “Krazy Kapers” and its mining of “Bullfrog Blues,” a 1920s blues tune on which Mopsick’s bass notes mimicked the bullfrog. Also strong: Cullum’s full-band arrangement of Jelly Roll’s “Freakish,” which he said was known previously only as a piano piece.

Cullum’s father, a clarinetist, formed what originally was called the Happy Jazz Band in the early 1960s. The cornetist took it over in the 1970s after his father’s death. The Cullum band has been together for about 50 years and has been broadcasting its Riverwalk Jazz series on public radio for 25 years.

The 2022 Newport Jazz Festival’s three days of sunshine were bracketed, more or less, by a pair of all-star ensemble jams that included Christian McBride. … END_OF_DOCUMENT_TOKEN_TO_BE_REPLACED

In its first full edition since the onset of the pandemic, and with a new director of programming, the Festival International de Jazz de Montréal … END_OF_DOCUMENT_TOKEN_TO_BE_REPLACED

Among the many physical, spiritual, and institutional losses related to the still-ongoing pandemic is that of Los Angeles’ renowned Playboy Jazz Festival (PJF) at the … END_OF_DOCUMENT_TOKEN_TO_BE_REPLACED

It’s difficult to imagine what the stage and the audience would have looked like at Gaillard Center in Charleston, South Carolina, if Rhiannon Giddens’ new … END_OF_DOCUMENT_TOKEN_TO_BE_REPLACED