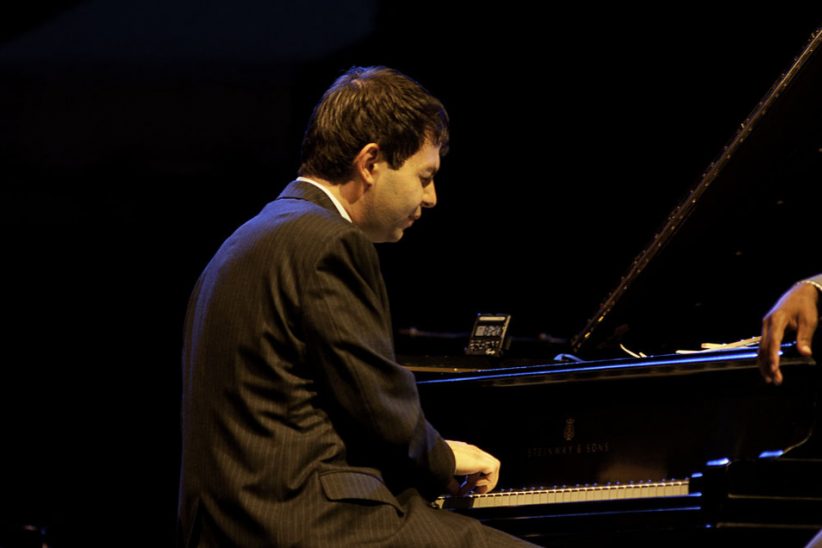 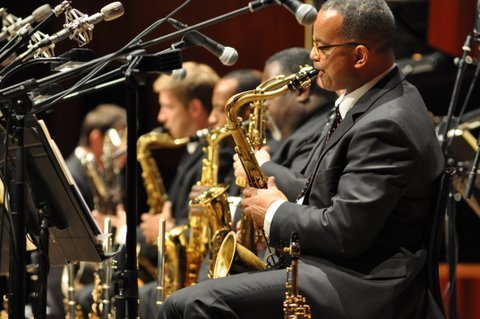 The Jazz at Lincoln Center Orchestra perform at the Barbican Centre in London on July 2, 2014

Wynton Marsalis came to Milwaukee last to give a history lesson. But instead of using Powerpoint for the instruction, he brought along the 17-piece Jazz at Lincoln Center Orchestra as his teaching tool. Marsalis offered background and context for each piece, yet at no time were his remarks dry or didactic. In fact, once the format was established, Marsalis’ brief comments before each selection became a welcomed and expected part of the evening’s performance.

The night began with the march “Peanut Brittle Brigade” from the Nutcracker Suite as arranged by Duke Ellington and Billy Strayhorn. This powerful opener had echoes of Ellington running all through it, sounding at times like it wanted desperately to meld into Duke’s “Rockin’ in Rhythm.” With Tchaikovsky and Ellington as the starting point, the evening’s lesson had begun.

“White Christmas” came next, on which Marsalis took one of his few extended trumpet solos. In fact, Marsalis was a confirmed section player throughout the evening. At no time did the concert become a star vehicle for the leader. The focus stayed firmly on the group as an ensemble and on the music it produced.

If any musician did get the spotlight more than the others, it was Milwaukee native Dan Nimmer. Marsalis introduced pianist Nimmer as the “home boy” more than once and even had his parents stand to be acknowledged for what music education can produce. When featured on a trio arrangement of “Santa Claus is Comin’ to Town,” it was interesting to watch the band watch Nimmer. Even while accustomed to hearing him every night, the other players appeared enthralled with their pianist’s abilities.

Vocalist Cécile McLorin Salvant joined the orchestra for several numbers, including “Have Yourself a Merry Little Christmas.” While striving to make the song her own, Salvant could not escape the long shadow of Judy Garland’s definitive performance on this number. The singer was at her most engaging on the spiritual “Mary Had a Baby,” followed by “Easy to Blame the Weather.” On this lesser known Sammy Cahn song, Salvant used her lower register to explore some wonderfully slow scat vocals. This selection was a highlight of the night, also featuring Marsalis’ trumpet and a bass solo by Carlos Henriquez.

Another pinnacle was saxophonist Ted Nash’s unexpected arrangement of “We Three Kings.” In addition to unusual chord voicings, this piece inverted the form of improvisation. Almost all jazz tunes start with the melody and then stretch into different areas of experimentation before returning to the melody. Nash’s version of this Christmas song started and ended with exploratory sections, with the middle of the tune reserved for the most recognizable melody lines. It was an interesting and successful approach to a very old work.

If “We Three Kings” offered the night’s furthest stretch, the take on “Zat You, Santa Claus?” was probably the most traditional. On this Louis Armstrong tribute, the orchestra had the sound of a true big band, with unison section playing leading to individual solos. They swung hard here, and Satchmo would have approved.

Well known melodies dominated the concert’s conclusion with “What Child Is This” and the Count Basie arrangement of “Jingle Bells.” But if the works were familiar, the approach was always fresh and energetic, with the members of this orchestra breathing renewed holiday spirit into every selection.

Marsalis thanked the appreciative audience for coming, and the band walked off stage. But as the lights began to come up in the hall and the audience started to leave, the sound of local boy Dan Nimmer was once again heard at the piano, with Henriquez’s bass and then the drums of Ali Jackson falling in behind him. Wynton Marsalis, for the first time, walked to center stage and this remaining quartet burned hot. Now they appeared to be playing for themselves, and it seemed for all too brief a time, as if they were channeling the Miles Davis group of 1967. I could have used a full second set of it.

Late in the night, after the conclusion of a ballad, Marsalis set down his trumpet, sighed and said, “Man; that was pleasant.” With this, he summed up what the audience had been feeling for the entire concert.

At SeixalJazz, across the graceful April 25th suspension bridge from Portugal’s capital city of Lisbon, the festival must go on. The last couple of pandemic … END_OF_DOCUMENT_TOKEN_TO_BE_REPLACED

Three jam-packed, sold-out, and high-spirited days of great music marked the 36th Red Sea Jazz Festival, which returned to its home in the Israeli port … END_OF_DOCUMENT_TOKEN_TO_BE_REPLACED

It was the warmest October on record in Seattle. Usually, when the Earshot Jazz Festival comes to town, it provides an escape from the autumn … END_OF_DOCUMENT_TOKEN_TO_BE_REPLACED

It was bracing to stroll into a brand-new creation for a story about destruction. Sixty years after its opening and 45 years after its last … END_OF_DOCUMENT_TOKEN_TO_BE_REPLACED