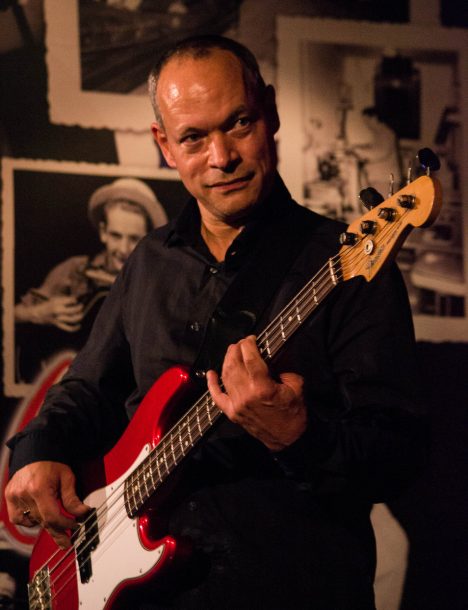 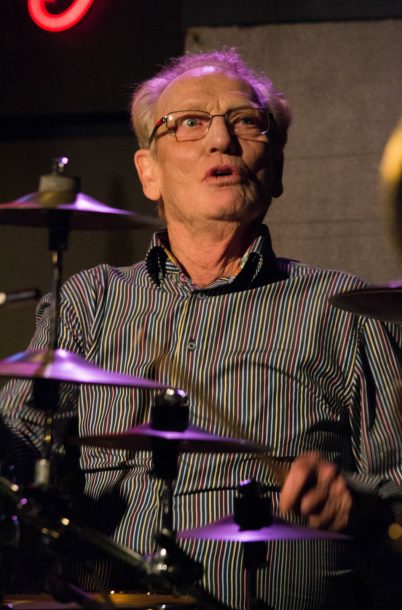 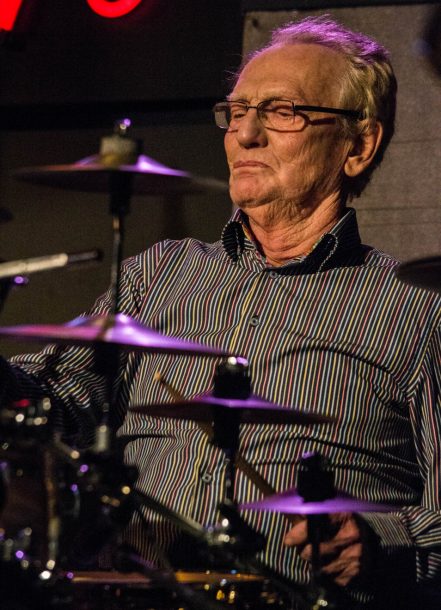 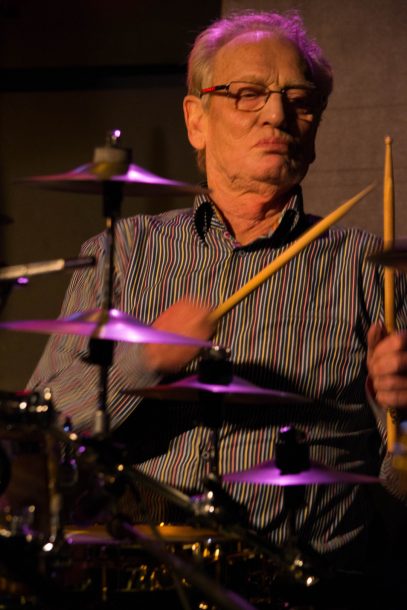 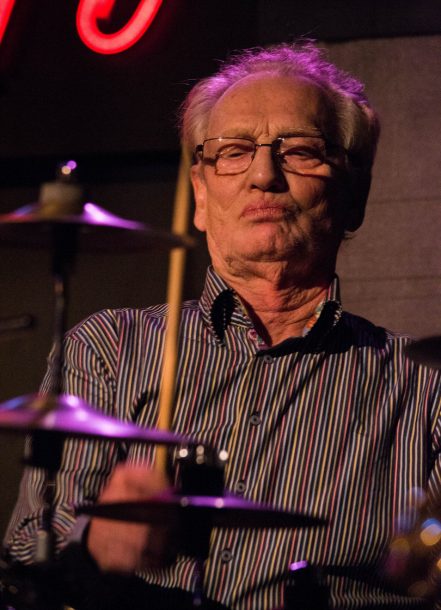 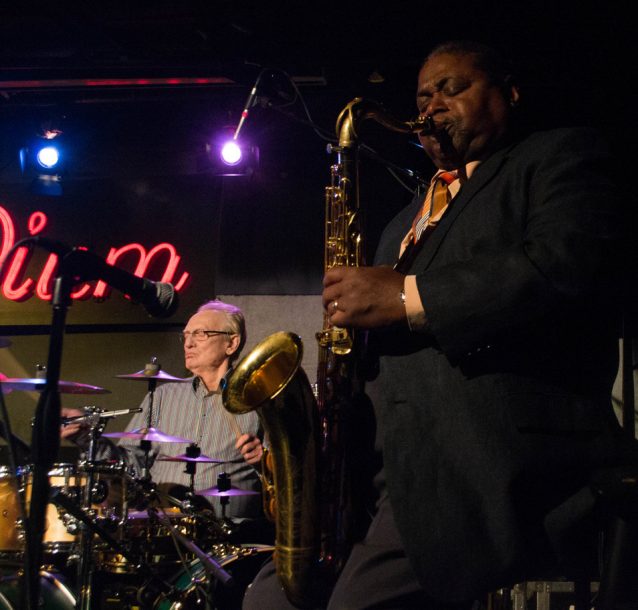 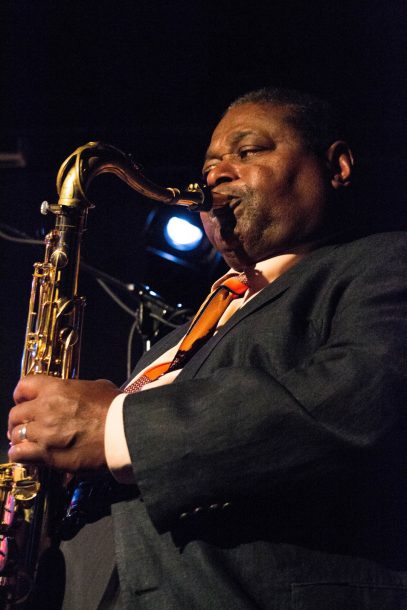 Some came to hear “Toad,” or at least “Sunshine of Your Love,” but there would be nothing remotely resembling Cream tonight. Others, having recently seen Beware of Mr. Baker, the 2012 documentary profiling the irascible 74-year-old British drummer, undoubtedly hoped he would smack someone in the nose with his cane, as he does to the director in one of the defining moments of the film. But the closest he came to that was grimacing repeatedly when the soundman neglected to turn the volume up on his hi-hat mic to his satisfaction. What Ginger Baker came to do tonight-and will continue to do here through Sunday, and on the other dates of his short American tour-was to play jazz.

That in itself should not have surprised anyone. Jazz was Baker’s first love-he played the music in the early ’60s before he detoured into rock, blues and, later, world music, and he’s never seen himself as anything other than a jazz drummer. The few years he spent with Eric Clapton and Jack Bruce in the groundbreaking Cream, followed by Blind Faith, Ginger Baker’s Air Force and other rock-oriented outfits, gave him his fame as one of the all-time power drummers, but he’s long expressed his disdain for most rock and has downplayed his own influence on the genre, dismissing even the most celebrated rock drummers as inferior to his own jazz heroes.

So when he turned up on opening night at Iridium with a quartet-Ginger Baker’s Jazz Confusion-featuring tenor saxophonist Pee Wee Ellis (a renowned alumnus of James Brown’s troupe and Van Morrison’s bands), bassist Alec Dankworth (the son of British vocalist Cleo Laine and saxophonist/clarinetist John Dankworth) and the Ghanaian percussionist Abbas Dodoo (Baker introduced the imposing man as “my bodyguard”), it was clear that Baker meant business. And get down to business was what they did, immediately launching into a slowly but deliberately unfolding reading of Wayne Shorter’s “Footprints.” Although he still performs on a kit sporting double bass drums, Baker’s touch is lighter now, more nuanced. As he’s always done, he spent much time on his toms but also on his small crash cymbals and hi-hat. The muscular, pyrotechnic displays of his Cream days have given way to polyrhythmic duets with his African cohort, and plenty of funky swinging. And for that Baker couldn’t have chosen two more sympathetic collaborators than Ellis and Dankworth, both of whom were always in the pocket here, providing all of the melody and giving Baker and Dodoo plenty to feed off.

Following the Shorter piece, Baker noted that “I’m getting old” and that, despite the desires of the venue’s management, he would break the first set into two parts, taking a break when he felt he needed one. But there were no signs of weakness at all, no flagging in his playing. In Ellis’ “Twelve and More Blues,” Baker and Dodoo engaged in a call-and-response with the saxophonist’s lead lines and Dankworth’s double bass, veering into serious post-bop territory at times. Baker at first was tentative, toodling on snare as he waited for the volume on his hi-hat to be turned up, then he tore loose, settling into a deep, intricate groove with Dodoo that was maintained into the next number, which Baker described in advance as being inspired by the Atlas Mountains of Algeria. With Ellis approximating a Coltranesque Eastern motif and Dankworth, now on electric, providing a root and counterpointing the melody, the quartet locked into some of its most thrilling music of the evening.

“Cyril Davies,” a midtempo tribute to the pioneering British bluesman, brought out Ellis’ soul side, and “Ginger Spice,” written by trumpeter Ron Miles, who recorded the tune with Baker on the drummer’s 1999 album Coward of the County, found Baker doubling the time while Dankworth locked into a repetitive bassline. As Ellis squealed giddily in his upper register, Baker and Dodoo took the cue and accelerated the pace, syncing tightly and giving the bassist enough space to take one of his most impressively inventive solos of the night.

Following the short break previously announced, the group returned with Ellis’ “Ding Dong Dang,” a swinging blues that featured several tradeoffs between the saxist and the two drummers (one of which found Ellis quoting what sounded vaguely like the Fleetwood Mac/Santana classic “Black Magic Woman” for a bar or two). “Aiko Biaye,” which Baker introed as an “old Lagos folk song,” highlighted the Afro-centric nature of the quartet’s rhythmic leanings. Baker, minus the fury of his younger days and more interested in subtleties, was clearly at home in this world-he briefly joined Fela Kuti’s Nigerian outfit Afrika 70 in the early ’70s and spent much time living and working in South Africa. Here, he was at his happiest burrowing deeper and deeper into twisted cross-rhythms with Dodoo, an exciting player who augmented his congas with various cymbals and other percussive tools, serving as a foil for the now more-reserved Baker with showmanship and flair.

For their encore, Jazz Confusion performed “Why?,” which required the audience to shout the titular word when prompted by breaks in the 1-2-3/1-2-3/1-2-3 beat. That tune was the closest Ginger Baker came to producing a smile this night, but just the fact that he was here, alive and still quite capable on his instrument, was enough of a reason for this mostly-over-50 crowd to go home happy.

The 2022 Newport Jazz Festival’s three days of sunshine were bracketed, more or less, by a pair of all-star ensemble jams that included Christian McBride. … END_OF_DOCUMENT_TOKEN_TO_BE_REPLACED

In its first full edition since the onset of the pandemic, and with a new director of programming, the Festival International de Jazz de Montréal … END_OF_DOCUMENT_TOKEN_TO_BE_REPLACED

Among the many physical, spiritual, and institutional losses related to the still-ongoing pandemic is that of Los Angeles’ renowned Playboy Jazz Festival (PJF) at the … END_OF_DOCUMENT_TOKEN_TO_BE_REPLACED

It’s difficult to imagine what the stage and the audience would have looked like at Gaillard Center in Charleston, South Carolina, if Rhiannon Giddens’ new … END_OF_DOCUMENT_TOKEN_TO_BE_REPLACED