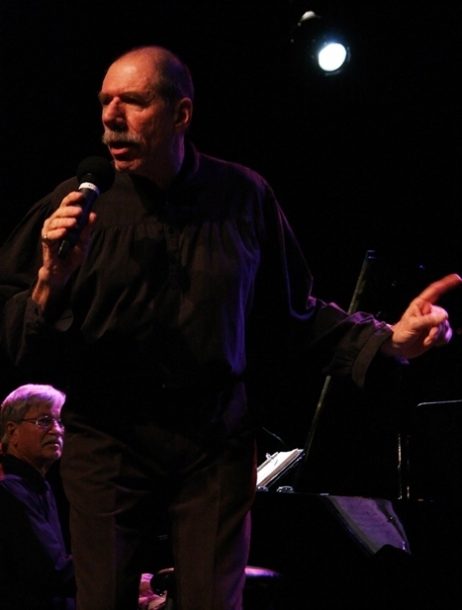 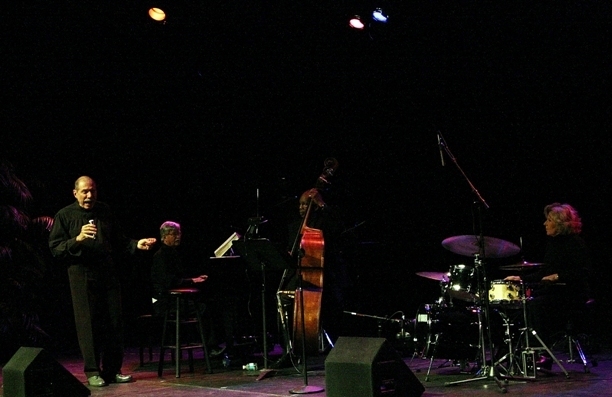 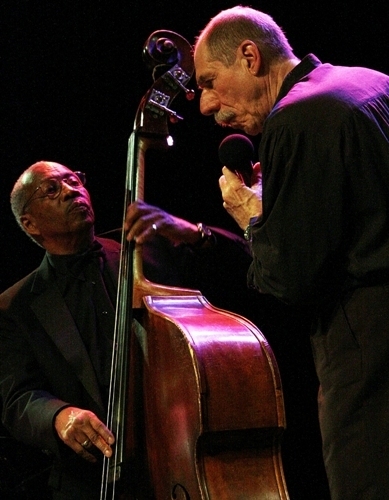 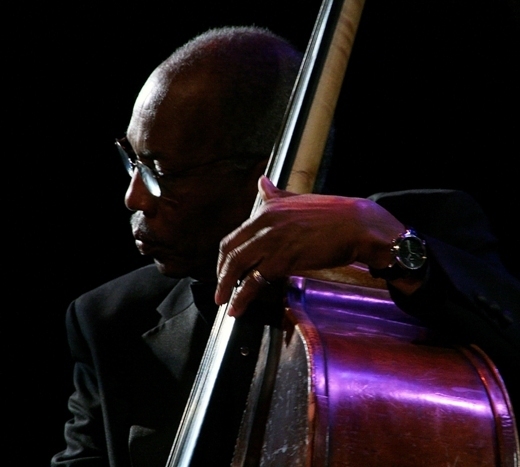 Lamb was a strong part of the headliner’s rhythm section, after receiving the Jazz Club of Sarasota’s Satchmo Award for his outstanding contributions to jazz as a performer and educator for more than five decades.

Gates performed two solid sets with pianist Mac Chrupcala, Lamb and drummer Patricia Dean. Gates has worked with Chrupcala in southern New England, but it was his first time out with the other band mates, who he’d only met that afternoon. His rapport with Lamb was creative and special all night.

The crowd got a vivid example at the start when Gates performed Eddie Jefferson’s lyrics to a Charlie Parker solo on “Lady Be Good.” He followed soon after with his combined version of “Blue Skies” and “In Walked Bud.” (As Gates explained, Thelonious Monk was performing “Blues Skies” one night when fellow pianist Bud Powell entered the club. Monk creatively reversed the chord changes and the latter tune was born, to which Hendricks later added lyrics). The “In Walked Bud” segment featured a bass duo, with Lamb engaged in a clever interplay with Gates’ sung bass part (complete with air-bass fingering).

Gates treated the crowd to his sure way with ballads, including “Since I Fell for You” and his encore, “P.S. I Love You,” as well as more humorous material (“I Told You I Love You Now Get Out,” the Lou Carter, Herb Ellis and Johnny Frigo tune popularized by Anita O’Day). The Miles-related material included Gates’ takes on “All Blues,” “I Fall in Love Too Easily” (which the trumpeter recorded in 1963) and “Four,” a 1954 classic on which Gates sang Hendricks’ lyrics to solos by Davis and pianist Horace Silver.

Gates closed the first set with what he said was going to be an aria from an opera. It turned out to be a fresh take on George Gershwin’s “Summertime” from Porgy and Bess. He added swinging and hip lyric updates before engaging Lamb in another duo segment, where he traded fours whistling against the bass solos. One whistling bit quoted Hoagy Carmichael’s “Baltimore Oriole” to great effect. He later emulated a trombone with skillful vocals on “You’d Be So Nice to Come Home To.”

Ironically, some in the audience of 300-plus weren’t even sure who Gates was before the concert, showing up to honor Lamb. They found out in a hurry that the festival had brought in a solid and engaging headliner. This was Gates’ first trip to southwest Florida and based on the reception he received, it ought not be his last.

The Lamb tribute was a special moment that choked him up several times in his acceptance. After getting off the road, including three years touring with the Duke Ellington Orchestra (1964-’67) as well as stints with Ella Fitzgerald, Lionel Hampton, Red Garland, Peggy Lee, Sonny Stitt and Mel Tormé, he settled in St. Petersburg and spent nearly 30 years teaching in the Pinellas County School System while maintaining a performance career. He is one of the area’s most in-demand bass players.

“I do not take this honor lightly,” Lamb told the Players Theatre audience as he joined an honorees list that includes Dave Brubeck, Ella Fitzgerald, Duke Ellington, Gerry Mulligan and Dick Hyman. “It represents thousands and thousands of people and their good works. I feel blessed to have been part of their lives.”

Other major concerts at the festival, running March 3-9, included saxophonist/clarinetist Terry Myers’ Orchestra in a Benny Goodman tribute on March 8 and the Four Freshmen on March 9.

“It’s time to imagine a place where we can come together,” Danilo Pérez said from the hallowed stage of Washington, D.C.’s historic Sixth & I … END_OF_DOCUMENT_TOKEN_TO_BE_REPLACED

At the Zeiders American Dream Theater in Virginia Beach, Va., between April 8 and 10, the Vocal Jazz Summit convened in person for the first … END_OF_DOCUMENT_TOKEN_TO_BE_REPLACED

The Big Ears Festival returned to Knoxville in a big way in late March, drawing an estimated 30,000 music enthusiasts from across the U.S. and … END_OF_DOCUMENT_TOKEN_TO_BE_REPLACED

Let’s get this out of the way: The Savannah Music Festival is not a jazz festival. Held over the course of 17 days in late … END_OF_DOCUMENT_TOKEN_TO_BE_REPLACED