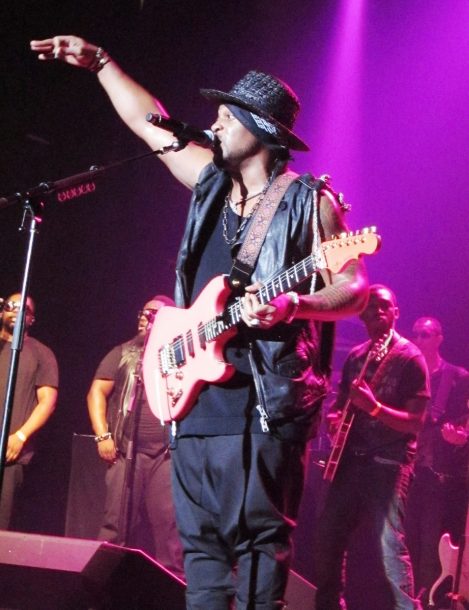 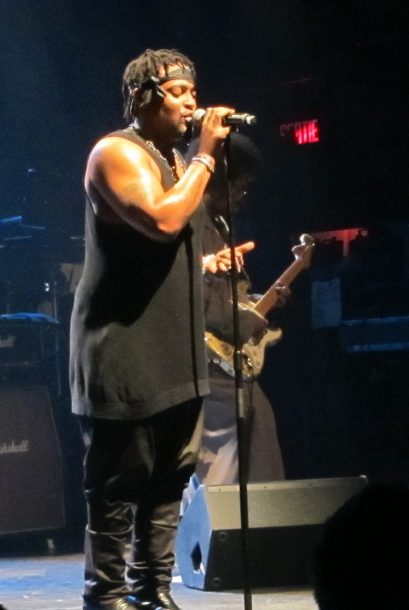 Local D’Angelo fans had an extra-special reason to anticipate his Montreal performance on May 30: Not only was it one of a few concerts on a brief pre-record-release tour, but it was his first performance in Montreal. Ever.

The critically acclaimed, Grammy-winning R&B singer, songwriter, multi-instrumentalist and producer has been on extended hiatus since his last tour for Voodoo (2000), the follow-up to Brown Sugar (1995), both of which went platinum. Having all but disappeared, D’Angelo has been gradually resurfacing; his first performance in 12 years took place at Bonnaroo in the summer of 2012, surprising the crowd as the unannounced member of drummer Ahmir ?uestlove Thompson’s SuperJam band. In March D’Angelo played the Brooklyn Bowl, a special “Brothers in Arms” duo show with ?uestlove (one of D’Angelo’s long-time collaborators). The Montreal concert, preceding his eagerly awaited new recording, was one of four, including Aruba, Boston and Toronto.

No stranger to the jazz tradition, D’Angelo, born Michael Eugene Archer in 1974 in Richmond, Va., to a Pentecostal pastor father and a mother who was a Jazz aficionado, grew up on gospel music, the R&B and soul of the 1970s, Miles Davis and Donald Byrd. A number of jazz musicians have been featured on his albums (trumpeter Roy Hargrove played and arranged horns on several of the Voodoo tracks; Frank Lacy, Russell Gunn and Jacques Schwarz-Bart played horns on the Voodoo tour). A pared-down, hornless group, the Vanguard, is D’Angelo’s most recent touring band.

The buzz in Montreal had been building for weeks. After 13 years, promoter Rickey D Daley (in collaboration with Evenko) finally managed to book D’Angelo. When he walked onto the stage at L’Olympia, the 1,400 fans went wild. As soon as he began to sing, it seemed all was indeed right with the world. The enthusiastic, cross-generational audience could drop a verse at the sound of an opening chord, indicating his appeal to a younger crowd than those who bought Brown Sugar and Voodoo back in the day, and likely listened to the CDs till they wore out. Spotted among them were singers, drummers, bassists and DJs representing Montreal jazz, soul and R&B. D’Angelo’s nine-piece band had something for everyone, with Cleo “Pookie” Sample (keys), Pino Palladino (bass), Chris “Daddy” Dave (drums), Jesse Johnson and Isaiah Sharkey (guitars), Robert Lumzy (percussion and backup vocals), Jermaine Holmes and Jack E. King III (backup vocals).

D’Angelo was in fine form, channeling Marvin Gaye (perhaps his most profound inspiration), James Brown, Jimi Hendrix, Sly Stone, Funkadelic and a rocking Prince, who seems to be the strongest current influence on his music. Decked all in black, slinging a hot-pink guitar, D’Angelo performed beloved classics along with several new songs (“The Charade,” “Ain’t That Easy,” “Sugah Daddy” and “Really Love”). Honing his guitar skills for quite some time, he has only recently begun playing the instrument in public, practicing five to six hours a day, as ?uestlove attests, with songs such as Funkadelic’s “Maggot Brain.”

The fans were forgiving of the venue’s sound challenges, which made it difficult to hear D’Angelo’s vocals or appreciate the brilliance of Palladino, Johnson and Dave. A brief intro led into a funky, James Brown-infused version of “Left and Right”; then came the sumptuous “Brown Sugar,” featuring a fresh guitar riff. The new psychedelic soul-rock vehicle “The Charade” had a Prince-esque quality, while the Latin-tinged “Really Love” (leaked in 2007) evoked D’Angelo’s earlier material, highlighting his wistful falsetto.

With some of the sound issues resolved mid-set, D’s vocals were more audible, and the band as a whole sounded more balanced. And that’s when D’Angelo really got into it, fully energized, clearly feeding off the love and energy in the room. Momentum built with ” S**t, Damn, Mother**cker,” Johnson shredding and Dave offering an all-too-brief solo. Then the stage emptied; D’Angelo returned, alone, water bottle and cigarette in hand. Sitting at his keyboard, the lights low and smoke billowing all around him, he performed one verse and the chorus of “Cruisin'” as the adoring crowd sang along in unison.

Still at the keyboard, he segued into the immediately recognizable “Untitled (How Does It Feel),” sending the crowd into an even bigger frenzy, as he paused intermittently to listen to the sound of hundreds of voices asking, “How does it feel?” All smiles, he replied: “Feels so good, Montreal!” The band returned for a new arrangement of “Smooth” followed by “Spanish Joint.” The laid-back lovers’ jam “Lady” transformed into a rock anthem, people jumping up and down, D’Angelo unleashing JB-style wailing, kneeling in front of the audience as the tune built to a crescendo. “D! D! D!” hollered the audience for an encore, delivered in the form of the super funky new “Sugah Daddy,” which (finally) gave Palladino some space to shine. “Put the funk in the air!” hollered D’Angelo, and a sea of waving arms filled the room. His magnetic stage presence was undeniable, and his loyal, supportive audience was more than satisfied with this 90-minute set of pure energy, heart and inspired musicianship.

And what of the long-awaited new record? “Totally brilliant,” promises ?uestlove, a “radical 180 turn” featuring his guitar playing and a unique new keyboard sound, using a guitar processor. The first single, “Really Love,” drops around the 4th of July; the album in its entirety will be released in September, featuring Palladino, ?uestlove, Hargrove, Fred Wesley, Dave, James Gadson, Jesse Johnson, Isaiah Sharkey, Eric Leeds, Cleo Sample and Q-Tip. A tour in support of the album begins in August (U.S.) followed by dates in Europe (October-November). Judging by his Montreal performance, D’Angelo is sure to renew the oxygen supply to his soul-starved fans. Stay tuned.

Among the many physical, spiritual, and institutional losses related to the still-ongoing pandemic is that of Los Angeles’ renowned Playboy Jazz Festival (PJF) at the … END_OF_DOCUMENT_TOKEN_TO_BE_REPLACED

It’s difficult to imagine what the stage and the audience would have looked like at Gaillard Center in Charleston, South Carolina, if Rhiannon Giddens’ new … END_OF_DOCUMENT_TOKEN_TO_BE_REPLACED

“It’s time to imagine a place where we can come together,” Danilo Pérez said from the hallowed stage of Washington, D.C.’s historic Sixth & I … END_OF_DOCUMENT_TOKEN_TO_BE_REPLACED

At the Zeiders American Dream Theater in Virginia Beach, Va., between April 8 and 10, the Vocal Jazz Summit convened in person for the first … END_OF_DOCUMENT_TOKEN_TO_BE_REPLACED